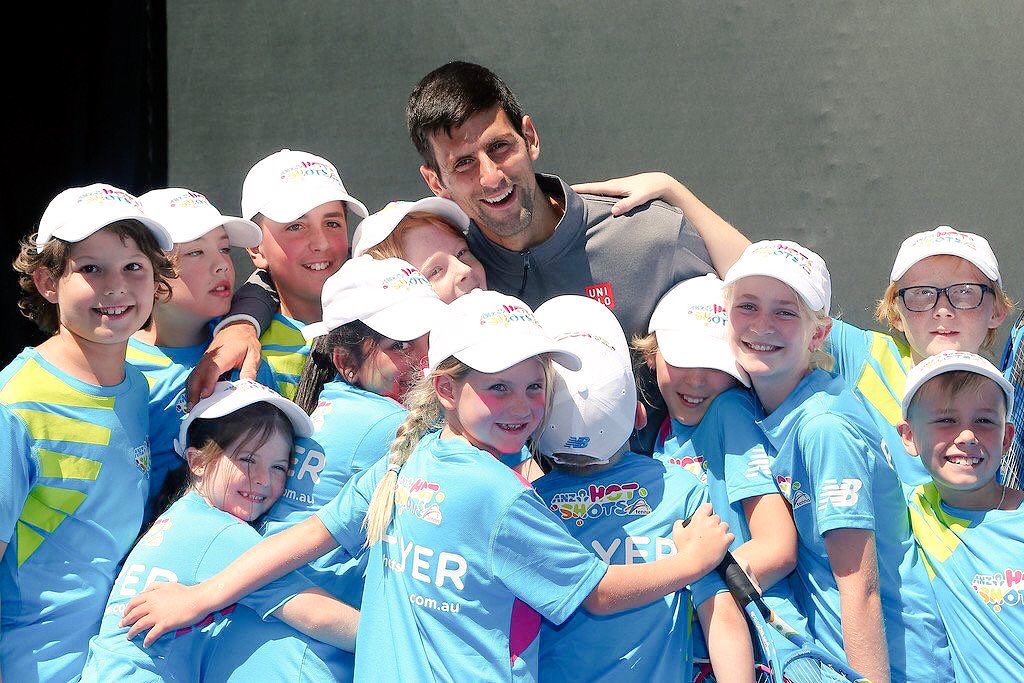 Want to See The Best Photos Of The Australian Open 2017 so far? Scroll on!

Can’t make it to the Australian Open this year? That’s ok, we’ve rounded up the 20 BEST photos of the Australian open to make you feel like you are there!

We would NOT want to be the poor ball in this practice session. The Swiss sensations are not only two dominant major champions, but buddies as well. Love to see that!

WOW. Check out the guns on Rafa. He’s clearly not skipping any gym sessions. Think he should bring back the sleeveless look on court? We wouldn’t be opposed 😉

#Twilight at the #AusOpen almost has me barracking for a Pom. #evansvscilic #tennis #ausopen2017 #melbs #melbourne

World class tennis and sunsets like that? Kinda makes you wish Australia was a little easier to get to!

Bouchard isn’t relaxing after booking a return trip to the round of 32.

Serena may have gotten engaged recently, but her focus is ALL business on the court.

When you wait 2hrs to meet the one & only Nole #legend #AOselfie  #AusOpen2017 @DjokerNole @tsizers pic.twitter.com/uVO2XLEyzM

After getting this shot, it was well worth the two hour wait for these fellas to get to meet their hero. Nole… what a guy!

To everyone bashing @NickKyrgios plz remember he’s 21! #AusOpen2017 and he’s a top bloke (once bought me an ice-cream and posed for a pic) pic.twitter.com/bcXan4UUy3

This guy’s sugar high obviously left his judgement pretty cloudy after another disappointing loss by his “buddy” Kyrgios.

Seppi showed a LOT of grit in coming back from two sets down to upset the young Aussie. Despite his ranking, he’s a very dangerous player, as he proved in round 1.

Yes Dan Evans! Just had a brilliant evening watching his amazing win over World No.7 Marin Cilic! What a start to 2017 he is having! #danevans #ausopen #melbourne #tennis #australia #grandslam #TeamGB #australianopen2017

Dan Evans continues to realize his potential as he upsets Grand Slam Champion Marin Cilic at this Aussie Open. The views of Melbourne ain’t bad either…

It was a tough match for me vs Elina. I was unlucky and at the same lucky to play against her. Unlucky because it was first round and lucky because you always get a priceless experience playing against the top players. Specially now when I don’t have many top level matches under my belt. Even though it was not a huge battle as I planed it to be🙄 we still had some very good points and I know that I am moving in the right direction! Tomorrow we start our doubles🎾 👯🎾 #ausopen2017 #australianopen2017 #melbourne #sofibellawear

Tough loss, but lots of respect for her opponent!

Some die-hard Andy Murray fans showing love for their favorite Brit. He fought valiantly like a knight, too, unseating the young Andrey Rublev and giving him a rude awakening as to what playing the top player in the world feels like…

Woahhh… is this a tennis match or an EDM show? This oughta get the young tennis fans out there psyched!

Muguruza enjoys a straight-sets victory. She’s pretty happy about it, too.

The KING is back after 6 months. #australianopen2017

He may look older, but he certainly doesn’t play it! #GOAT

Temper Trap putting on a show for all ages at the Open yesterday. Tennis and live music? Take note, US Open, the Aussies are doing it right.

Regardless of people’s comments over who has looked in first 2 rounds, for me this is the best. Andy was simply awesome and on this form will take some stopping. Pointless saying he was always going to win. Andrey rublev is a very good player who many experts predicted could give Andy plenty of problems. #murray #victory #round2 #australianopen2017 ( Scott Barbour )

Don’t mess with the world #1. Andy looking STRONG in round 2. Experts saying only Djoker has a chance to take him down. We tend to agree.

Awwwww… Novak knows how to win over fans. Adorable!