4 American Women Into The US Open Semifinals... Wait, What?!? - Play Your Court Tennis Tips and Information
Skip to content 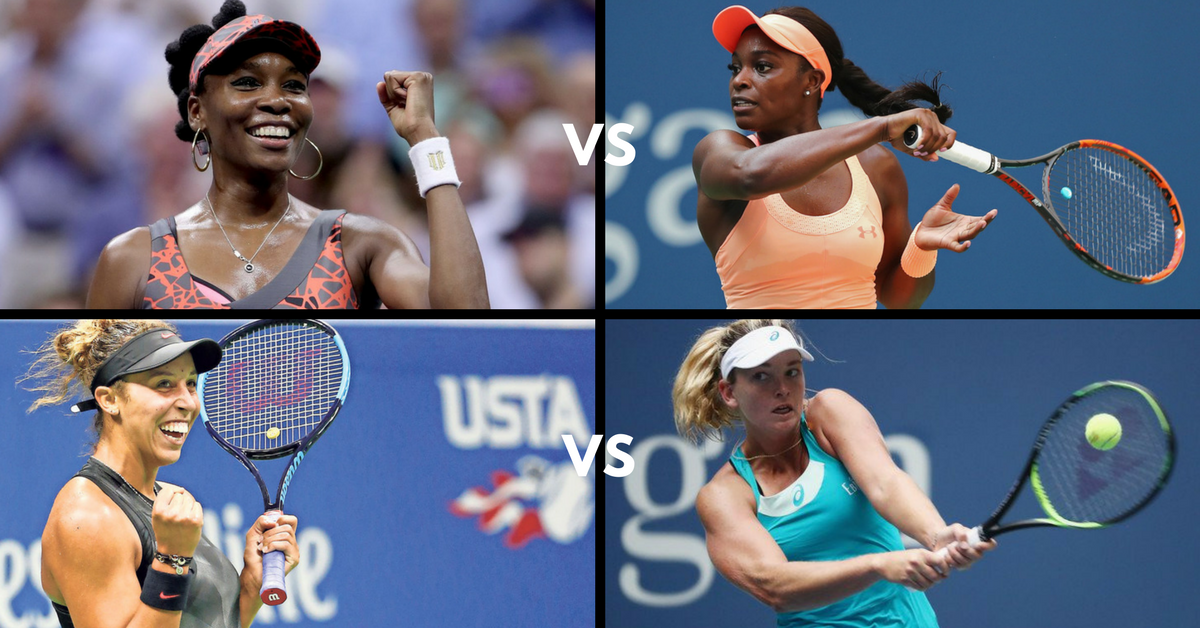 How long have we been hearing that American tennis is in trouble? Seemingly for the past 15 years, at least. All credit to Serena and Venus, that’s not entirely true. The Williams sisters have been carrying the torch proudly for two decades. Serena has not only hoisted trophies for the USA, but she has dominated the game. Beyond her, however, American tennis fans have been longing for the “next” star for what seems like forever.

Well, they have arrived, and in explosive fashion.

At this year’s US Open, all four quarterfinals featured an American vs. a non-American. In each of those matchups, incredibly, the Americans prevailed, giving us the most exciting women’s major semifinal docket in years.

Venus Williams became the oldest US Open semifinalist in history and is joined by 3 other twenty-somethings, filling us with hope for American tennis’ future. Sloane Stephens, Coco Vandeweghe, and Madison Keys each reached their second ever slam semi.

One thing is for sure, an American woman will be crowned champion in two days time.

Without further ado, here is our US Open Women’s Semifinals preview and predictions:

This goes for both semifinals, but you can expect to see some enormous groundstrokes and very short rallies. Sloane boasts a game that is very reminiscent of Venus’ when she was younger. She possesses huge power off both wings and moves extremely well. Venus is still (somehow) playing inspired tennis at the ripe age of 37 years old, and has a very good chance to remarkably add to her already impeccable major trophy case. Venus has been in this situation so many times before that the moment will certainly not get to her. Sloane’s quickness on the court coupled with her power seemingly give her the edge on paper despite not being ranked after missing a year from injury. I think that’s where the advantages stop, however. Venus’ strong serve and ability to dictate the points should negate Sloane’s movement.

This semi is wide open. Both players have huge serves and a great ground game. Keys comes in with the higher ranking and seed (15 vs. 20) and I believe she has the edge in this match. Both players are relatively green as far as experience going deep in the slams, but both seem to rise to the occasion on the biggest stages. The biggest question mark in this match comes from Coco’s mental game. She has always been a passionate player, and in the past it has gotten the best of her. Previous to this tournament, she had never made it past the second round of the US Open, so she is playing with house money. Her rise to stardom this year can be largely contributed to her new coach, Pat Cash, who is up for the Hall of Fame this year. He has worked with her to harness her negative energy, and while she still gets upset and emotional on the court, she is doing a much better job of channeling it into positive energy. While her huge serve and ground game may be able to push other opponents around the court, Keys plays a very similar game and she will not be intimidated. Keys is more of a well-rounded player, capable of handling power and showing more versatility during the points. I think she is going to come into this match ready to play and get off to a fast start that Coco will struggle to recover from.