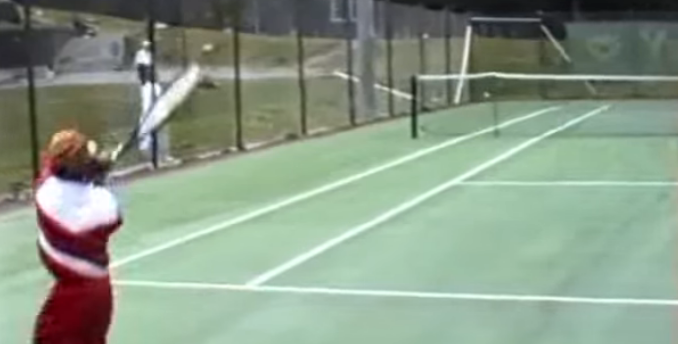 To become one of the greatest tennis players of all-time, you have to be very good at a very young age. This video is a good example of just how good elite talent looks at an age where kids are typically just happy to be riding a two-wheeler. This video, taken in Serbia when Novak was six and a half years old, training with a variety of different opponents, is pretty unbelievable.

His strokes are remarkably long and fluid for a child that size. It is as impressive as it is adorable seeing him swing such a huge racket and hit the ball as cleanly as he does.

Perhaps the most entertaining part of the entire video is his mannerisms. He whines and gets visibly upset when he misses, even going so far as to fall to the court and hit a ball in anguish after a miss. While Novak has become a more mature player in recent years, those mannerisms are very similar to the ones that we grew accustomed to in the earlier stages of his career.

Regardless of his childish tendencies, it is remarkable to see such talent come out of such a small human being. Our favorite part is watching him smack perfect groundstrokes indoors at the end of the video. That textbook technique, little did he know, would lead him to double-digit major titles in his future. SO cool!!

17 Problems Only A Tennis Player Will Understand