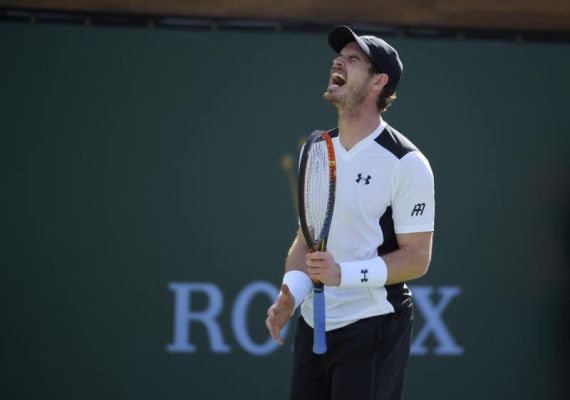 As day 7 is underway at the 2016 BNP Paribas Open, let’s take a look at the action that has unfolded so far. As one of the premier events on the calendar, the BNP Paribas Open never has any shortage of intrigue, great battles, and shocking upsets. This year is no different. We have already seen tops seeds fall, and Cinderellas on both sides of the draw. Let’s take a look at some of the best surprises and upsets:

We wrote in our preview blog that Andy Murray was ripe for an upset coming off a long break and becoming a father for the first time since the Australian Open. Though his form was good in the first round of the Davis Cup, it would come as no surprise if Andy was at less than his best in his first full-field event of the year. Sure enough, Murray crashed out in the third round to 53rd ranked Federico Delbonis. Murray played solid, but unlike the Murray we are used to seeing, just was not able to be the aggressor, or turn defense into offense as he regularly does. Couple that with an opponent playing at the top of his game, and Murray walked off the court a loser in a third set tiebreak. Though this is a disappointing result, look for Murray to use this as motivation as he heads to one of his favorite tournaments in Miami next week.

Coming off her maiden slam title in Australia, expectations have never been higher for the German star as she has reached the #2 ranking in the world. The weight of those expectations coupled with an opponent (Denisa Allertova) in fine form, saw her exit the tournament in straight sets in her opening round. A disappointment, to be sure, but she is too strong of a player and competitor to not bounce back from this quickly.

Muguruza has made a largely quiet ascent to the upper echelons of the women’s game, so when she bowed out in the second round (her opening round) to the young American, Christina McHale, it did not get the publicity of some of the other upsets. It is a little bit troubling for a player of her caliber to lose a match like this at one of the biggest events of the year, and go so unnoticed. Hopefully she can right the ship, or it is possible that her descent could be as quiet as her ascent.

If you haven’t heard of the 18 year old German yet, you will. He is one of the highly-touted young guns, and is making a strong argument that he could be the best of the bunch. After taking down journeyman Ivan Dodig in the first round, he followed it with statement wins over Grigor Dimitrov, and Gilles Simon to earn himself a spot in the round of 16. No matter what happens in his next round, the future is clearly very bright for Zverev.

This one goes down as both a surprise and an upset. Venus made her return to Indian Wells after a 15 year absence. She, shockingly, fell in the first round, but it was still a victory. It undoubtedly took a lot of courage to return to the place where she was unfairly booed off the court. Hopefully she will be back and better than ever next year!

You may not have heard of Nicole Gibbs, but you very well may in the future! She was a standout player at Stanford but has struggled (relatively speaking) in the transition to the professional game. However, she recently broke into the top 100 and had the best result of her career at Indian Wells this week after making it through qualifying. She took down Madison Keys and Yaroslava Shvedova before stretching two time Wimbledon Champion Petra Kvitova to three sets. She may be small in stature, but she is proving that her game is big. Watch out for her!