Tennis Tips: How To Attack Those Wide Serves -
Skip to content 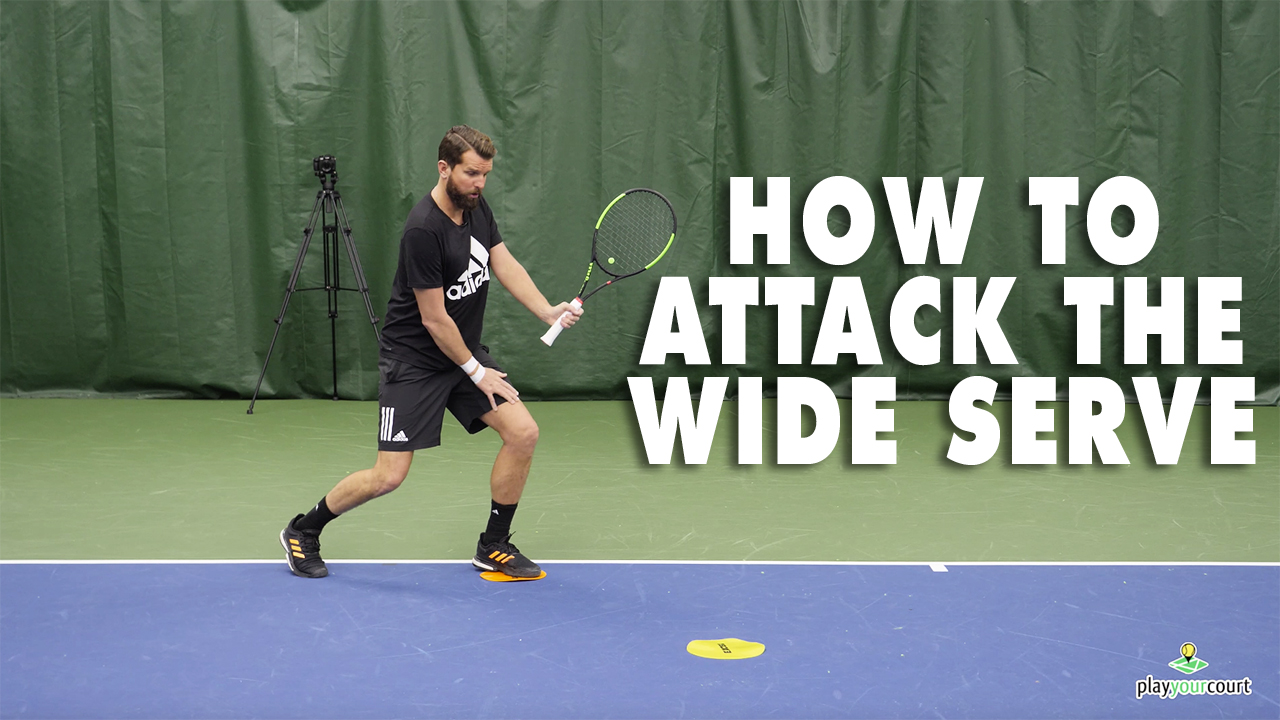 We’re going to jump right into action, and let me show you these two critical steps, in order to attack these wide serves, and start turning those defensive returns into winners. Okay, so with this footwork pattern, what we’re talking about is something very specific where we’re getting out to our inside leg, our front foot. So as a righty, my goal here is to cut this ball off and make sure that I’m getting forward. The mistake that a lot of players make is that when they see the wide ball from the split step, they immediately step out with their right foot. And from here, they’re either reaching to they’re trying to step across. And either way, they’re not breaking the plane. They’re not getting diagonal, and not getting anything on this ball in order to be offensive, right? So maybe we end up blocking from there or just kind of just chipping it back, whatever we can do. The goal here, is really to keep the racket in front, and use the pace that we’re receiving, and deflecting it back with forward momentum.

All right, so as you can see, I’ve got a couple little spots down, all right? These are going to indicate the footwork pattern, where I want my feet to go. All right, so if I’m not getting the serve particularly in a super out wide, what we’re going to see is just the two simple steps from the split step. It’ll initiate from the split step, whether, you know, and some of you guys are stepping in and then going here, or you’re just split stepping in. But so as I go into my split step, from here, I’m going to get my swing and then I’m going to land. What we want to do practicing, is first just feel the split step, okay? From here and then load. So you can see here, I load my leg, and I’ve got the unit turn really short through that unit turn. And what I want to practice is that, all right? I want to feel the split step and that. And so, you’ll feel like that little imbalance. And that’s good that we have the imbalance. Because as soon as I can get in the habit of going here and feeling that imbalance, I’ll start transitioning my weight forward.

So from here, I go into the split step through the swing, and I finish left. All right, you’ll notice, I’m trying really hard to keep the head still, and finishing. So that’s the first of this series here. But if we’re getting a serve that’s really breaking the plane, really pulling wide, the two steps aren’t going to be enough, from the split step, load, to that wide step. You’re going to need something a little bit more additional. And we’re going to add a step here. All right, and from here what I’m doing, is I’m split stepping, I’m taking a step out right, and then loading out to that ball. So here, we’d probably see these change, maybe just a little bit, as they scoot up. All right, and for you guys that like to step in, from here the step, the split, the step, and then cutting the ball off, right? You can see that plane in which I’m cutting the ball off.

All right, so in review guys, if you’re getting the ball that’s just cutting the corner, but not pulling too far out on the short angle, from that split step, load, and work through. If you’re getting a ball that’s working really off the court, add a step. So from the split step, load out. You’ll notice this foot went forward, it didn’t go sideways. And then from here, my hips face this direction and I’m able to cut off the ball. All right, so now we’re going to talk about the backhand.

The backhand’s going to operate in the same exact method. All right, from the split step, I’m going to load my outside leg, small unit turn. And then, I’m going to drive to cut off that ball diagonally. Again, using the spots, I’m going to coordinate the different steps. All right, I’m split stepping in, turn, load, swing, and land, okay? Again, really controlling that spine and the head. You don’t want it to tilt, you’re really trying to keep that plane.

All right, if the ball is particularly out wide, from here, we would see the split, small step, and swing through. All right, we’ll take a look at those in demo mode, now.

All right guys, really hope you enjoyed today’s instruction. Again, this was some high level stuff, PlayYourCourt 80 and up. And if you’re not in the community, you’re not what this rating means, now is the time to check it out. In our community, we’re going to link you with players with players with the same skill level. You can play practice matches, or check the Challenge League, where you can get a ranking. And also, even more importantly, we’re going to be there to coach you every step of the way. If you take an L, even if you get a win, and you have things specific that you need to work on, we’re going to have instruction, tailor-made, that’s going to be delivered to you in real time, all right? So get out there, check out the community. Guys, if you liked the video, please hit like. If you never want to miss a video, hit subscribe. We’ll see ya next time.

How to turn your defensive returns into winners…the two critical steps every tennis player should be using.