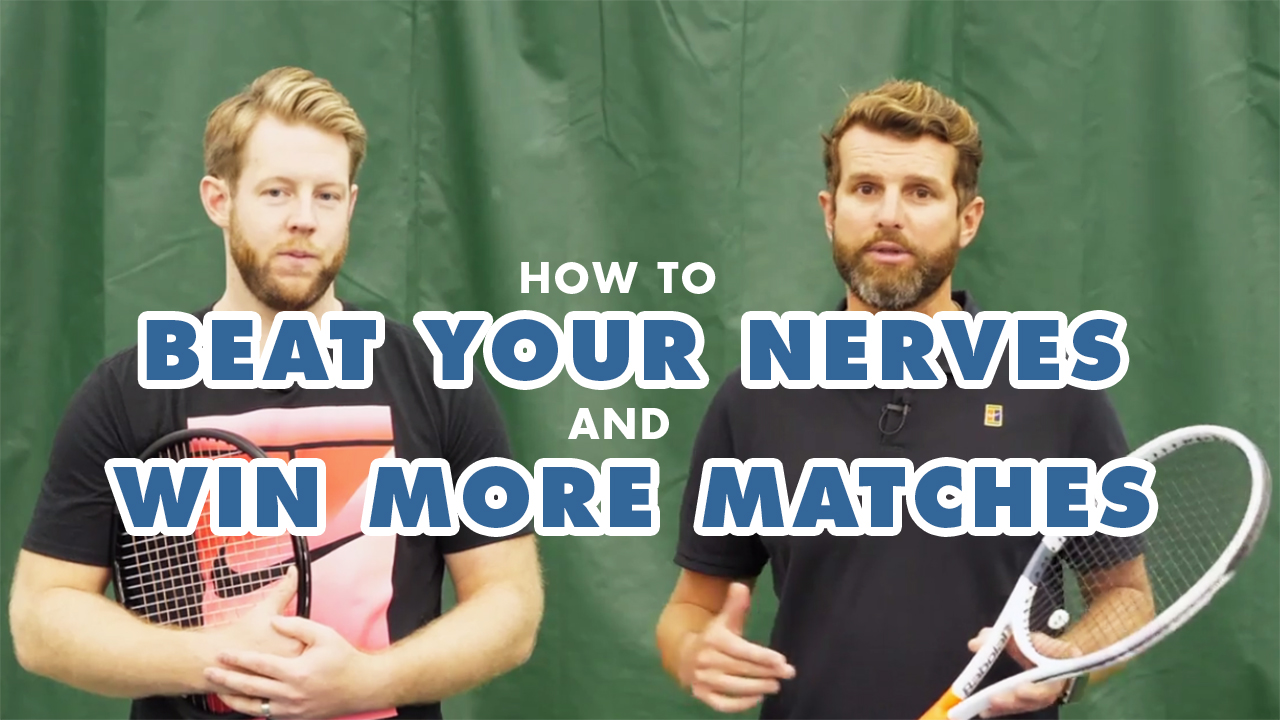 Still getting nervous on the court? Watch this vid! Scott and Nate will show you how to prevent nervousness from wrecking your game.

This video is for players with a PlayYourCourt rating of 50 and up.

– [Nate] Hey guys, Nate and Scott here from PlayYourCourt.com, and today we’re gonna show you how to deal with your nerves while on the tennis court. So today we’re talking about this pesky nerves that creep in during match, player and those big points. And no matter what skill level you are, you’re gonna deal with nervousness at some point. Regardless of the skill level, we all get nervous, the pro-players do too. In fact, they’d be more concerned if they were competing without nerves.

– [Scott] Yeah guys, nervousness is an emotion, it’s no different than being happy, I can’t tell you hey, don’t feel sad, that’s an emotion, that’s how you feel, so we’re not gonna get rid of nerves completely. The pro players don’t either, they just learn how to cope with them. So what we’re gonna talk about first is what do nerves actually do to your body? The very first thing, for me personally when I get out on the court and I’m starting to feel nervous, my feet lock up. So all of a sudden I’m having a hard time getting moving, I start making some mistakes, I get more nervous, that tightness transitions up into my arms and into my hands, and all of a sudden, I’m not moving my feet, and I’m swinging like a little T-Rex ’cause my arms are so tight. So we’re gonna talk about four steps you can use to relieve your nerves on the tennis court, and again, not necessarily eliminate the nerves, but just make sure they’re not wrecking your game. So step one, we just talked about my feet being frozen, step one we’re gonna think about moving our feet. This is good for a couple of reasons, one, it takes your mind away from being nervous and puts your focus on something productive, which is moving your feet.

– [Nate] Happy feet guys, gotta keep your feet moving. Alright number two, let’s talk about breathing. Scott, when he got back from college, had this obnoxious way of breathing.

– [Scott] It’s like he was blowing up a hot air balloon, but it was a method to keep him loose through the groundstrokes, the volleys, would you say you were breathing on all the strokes?

– [Scott] Right. So kind of the idea, it’s the same way in yoga that we’re using our breath to lengthen muscles. We don’t want contraction per se, alright. And one of the tools we’re seeing a lot from the Spaniards now is really heavy with what sound like vowels, specifically the ‘i’.

– [Scott] Precisely. Think of David Ferrer. This technique is used to lengthen the breath, we want a long breath. This isn’t, don’t think necessarily karate, where it’s like a “yah,” because that’s exertion, what we want is a long breath. So like the “I,” it’s a long breath.

– [Nate] At some point it could get obnoxious, and you may not want to go in the court with these really loud noises, but make sure that you’re breathing. So another one that you can do, is simply use pursed lips when you breathe, so “phew,” Roger uses this, obviously you can’t hear him, the guy sounds like he’s not doing anything, he’s certainly not sweating, Alright, so from this breath I think this will really help you relax, and Scott’s gonna talk to us a little bit about step three, which is?

– [Scott] Relaxing your hands. So as I talked about, some of the symptoms of being nervous, our feet freeze up and moves up into our hands, we start to death-grip the racket, and you start to see my arms fold up like a lawn chair, it starts looking a little Tyrannosaurus Rex walking around. So to relieve nerves, a lot of it can start in the hands. If I relax my hand, then all of a sudden I can relax my shoulders, and my arms and everything just starts to loosen back up where I can finally start swinging through the ball again. I know when I get nervous, personally, I start to poke at the ball and that follow- through just doesn’t come at the end of my stroke, and it’s all because my hands are tightening up.

– [Nate] Scott, growing up, did you have your coaches tell you to shake your hands out while you were playing?

– [Scott] Yes, so relaxing my hands is always a huge thing for me. I’ll actually tell you, for me, in Juniors, in the fourteens, I went through a full year and a half long period where every single tournament I played in, my backhand would tense up and I couldn’t relax my hands, and I couldn’t follow through, and it would just look like this very strained motion, and I dropped from about eight in the mid-Atlantic all the way down out of the top 100, and it was just all from nervousness, and I just didn’t have a good technique, finally got with the right coach, taught me to relax my hands, that backhand came back into my tournaments, got back to where I needed to be. So relaxing your hands is a huge part of relieving nerves.

– [Nate] In between points, guys, get that racket out of your dominant hand, shake your hands out, returning serve, open your plane, your dominant hand up, just like Scott said to relax that hand. So let’s move on to step four, there’s something called paralysis by analysis, sounds fancy, but it is dreadful. And what this is, is you’re taking all the information from your lessons, and you’re putting them into your matches. We can’t think about the technique while we’re competing. Hence, the paralysis by analysis. The only thing that we can really focus on is the sending and the receiving of the ball. When our instincts take over, we’re timing the ball out, in specifically from the stroke itself we should be thinking about the follow-through, lengthening the stroke, so it all starts adding up, like we started talking about the feet moving, the breath, relaxing the hands, so we start getting this nice loose stroke all the way through. I’m confident if you start focusing on these four aspects, you’re gonna start finding optimal performance.

– [Scott] So I hope you enjoyed this video, I really want you to improve your tennis game, the problem is, I don’t really know anything about you or your skill level, so what I want you to do, click the button below, answer a couple of quick questions for me about your game, I’m then gonna send you custom, tailored content with things that you specifically need to be working on to improve your game. Just click the button below, answer a couple of questions, and I’ll do the rest.