13 Tennis Stereotypes You May Have Encountered
Skip to content 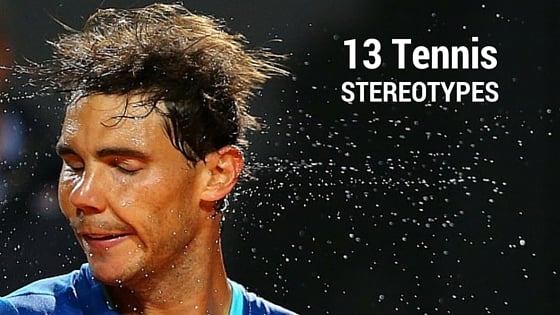 Tennis is a very unique sport in that when you take the court, there is no safety net. You are out there with your thoughts, good or bad, and it makes for great theater. Because of the solitary, mentally challenging aspect of the sport, it also breeds some very interesting personalities. Some are funny, some are cute, and others are downright obnoxious. Here are our top 13 favorite tennis stereotypes that you have probably encountered on the tennis court. Haven’t seen some of these? Watch out, they could be you. 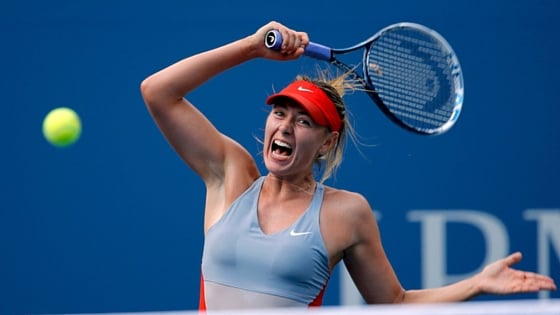 We’ve all played a player who screeches on every single shot. No matter the situation or type of shot, you can bet that they will scream at the top of their lungs as they make contact. The worst offenders will extend their squeal until you are returning their last shot. Not only is it annoying, but it is incredibly distracting. Nothing worse than when your opponent lets out a bellowing grunt as they hit a drop shot winner. Stop it, screamers, just stop. 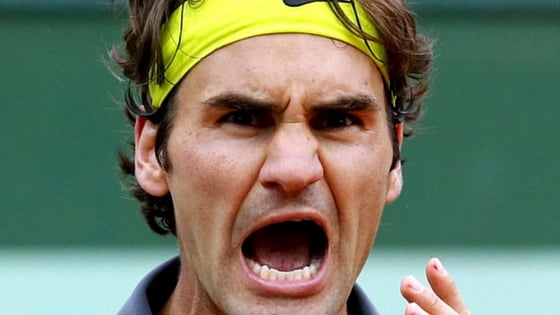 This player will find something to tell themselves after each and every point. Whether they coaching themselves, punishing themselves or making excuses, this player is utterly incapable of keeping their composure and internalizing their thoughts. While it can be annoying, if you are facing one of these players, chances are they are a head-case and all the self-talk is working out to your advantage. Keep your cool, and let them self destruct.

3. The “always forgets to silence their cell phone” player 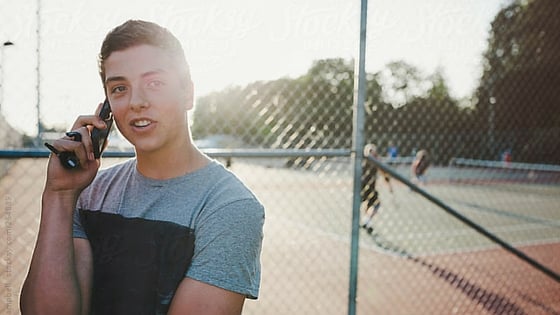 Like clockwork, this player never remembers to turn off their cell phone ringer, and it will go off during a crucial point in the match. There are two types of people in this category, and one is much worse than the other. The lesser of two evils will either ignore the call or silence the ringer right away (hopefully after calling a let). The more clueless of the two will walk over, and rudely answer the call, telling the person on the other end of the line, “It’s ok, I can talk.” Get a clue, dudes and dudettes. 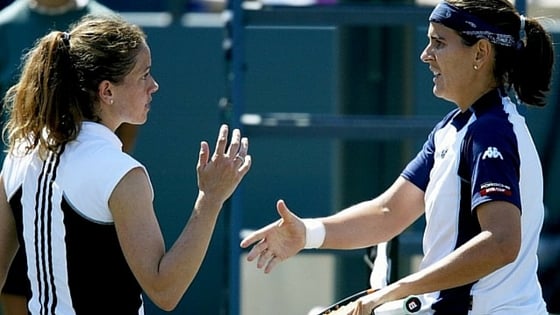 This player never gives up, and you can’t blame them for that. Even if they just lost the match 6-0, 6-0, they will always ask to play one more set, positive that they will get you on the next one. Someone should teach them when to cut their losses and call it a day, but that is never an option for this player. Sometimes, your only way out is to run out of daylight. And if the courts are lit, well, you just may be there forever! 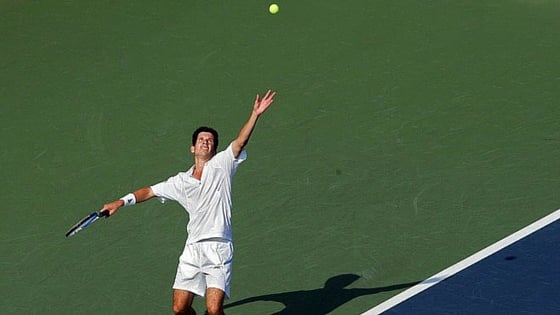 This player is incapable of getting the ball in play when it’s their serve. Toss after toss, they catch the ball, look up at you and insincerely mouth, “sorry,” before tossing the ball up again, only to catch it time after time. Your blood is boiling before they finally manage to dink in a second serve, and struggle to even find solace in the fact that they are likely double-faulting twice a game. Get on with it already! 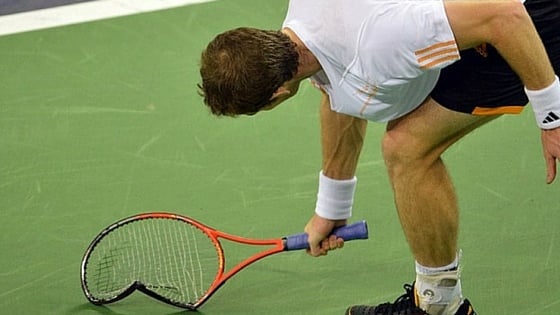 No matter what level of player you are, you will undoubtedly encounter the “Rager.” This player will get upset with themselves from the first unforced error, and that anger will build throughout the match. Their racket, the fence, net, ball, and even their head will pay the price for their displeasure. They will yell at themselves after nearly every point, smash balls, and rackets, even if the error was not egregious. Logic does not seem to be a part of the equation for these players, and level-headedness is a pipe-dream they have likely given up on long ago. 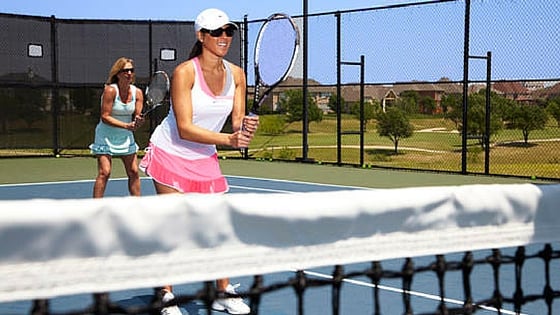 This player is very common at country clubs, but you can find them on public courts across the country as well. These ladies are always dressing to impress, generally more concerned with looking like a good tennis player than actually being one. You will find them sporting the latest matching outfits from Nike, Adidas, or Lululemon, and they are much more likely to want to talk about the latest edition of People Magazine than they are the strategy in between points. That’s ok, tennis is a social sport after all! Better expect a long changeover if you go to a third set, because chances are this princess will want to change into a new outfit. 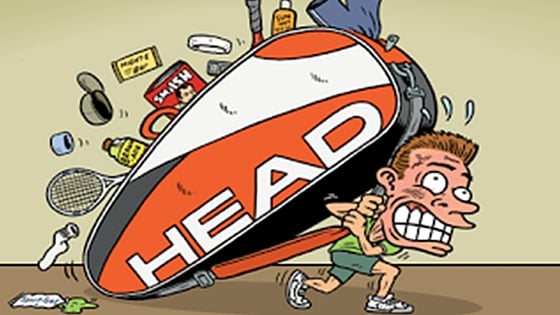 This player shows up to a match with a bag roughly the size of their torso. Inside they carry 5 rackets, unlimited grips, and all sorts of gadgets. They arrive early and use their stretching tools to warm up, then put on their ankle braces along with 4 different sweat bands. They re-grip their rackets on every other changeover, and don’t play nearly well enough to warrant their expensive setup. But you need to find an edge somewhere, so why not with your equipment?

This player has watched one too many Nadal matches. They bounce the ball a hundred times before each serve, and go to the towel in between every point. They put up their hand, telling the server to wait, until they have gone through their routine. They border on OCD, and are unable to start a point until they are perfectly set. The worst part is they are so skilled at their slow play, that you can’t even speed up the pace of play to get them out of their comfort zone. These are some of the most frustrating players, especially if they are beating you. 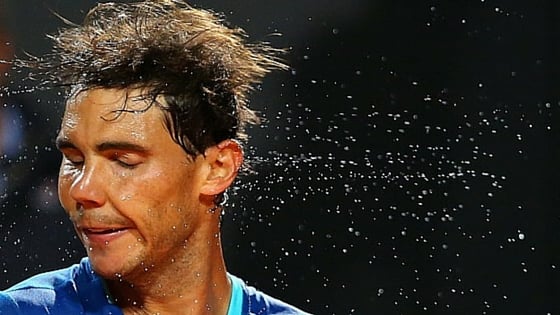 It’s 51 degrees outside, but this guy is on his third shirt of the match. What gives? That’s just gross. 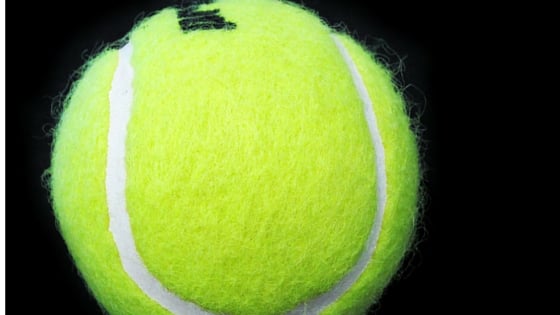 Perhaps they don’t have pockets and use that as their excuse, but they NEVER have a second ball when they are serving. Funny how this player always manages to have a very low first serve percentage, too, isn’t it? Each missed serve means a walk back to the fence to grab another ball. T-t-t-t-TODAY, junior! 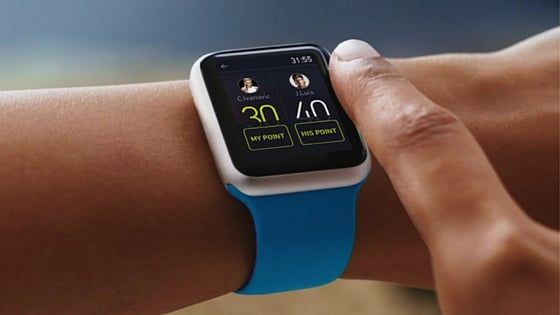 This player NEVER remembers the score, even when they are serving. Even after the first point of one of their service games, they will look up and as you, “Hey, what’s the score?” Even worse, they often claim to forget the score and line up on the wrong side of the baseline regularly, too. It’s not that hard. Say the score out loud, and then remember it for the next 30 seconds. Why is that so difficult? Some people just don’t get it. 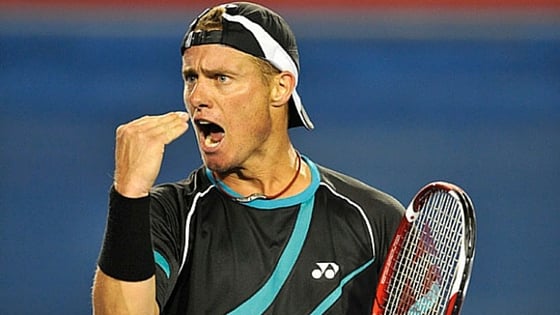 Whatever you do, DO NOT let yourself lose to the “COME ON!” screamer. This player yells “COME ON!” after every single point they win. Whether they hit a winner on break point, or you miss an easy volley, they will be in your face yelling, trying to pump themselves up. The only way to combat this is to make sure you win. If you are beating one of these players, they generally turn into a “Rager,” and they are a lot more fun to be on the other side of the net of.

Did we miss any stereotypes? Certainly you have encountered some others. Let us know in the comments section!

5 thoughts on “13 Tennis Stereotypes You May Have Encountered”