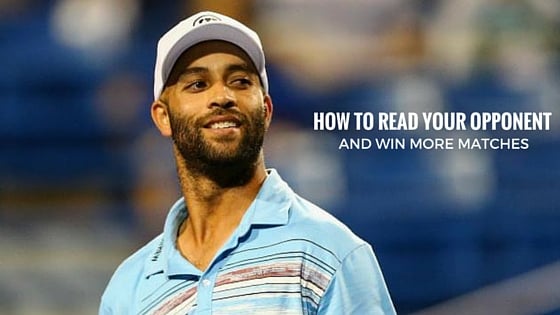 Tennis is like a chess match. It is as much about strategy as it is about execution, so it is imperative that you go into each match with a game plan. You know your strengths, and that should play a big role in how you approach each match. However, an effective game plan for any match should be as much about your strengths as it is your opponent’s weaknesses. There are several ways that you can read your opponents to ensure that you implement the most effective game plan possible for each match. You can read your opponent from the moment they step on the court, and you should have a solid plan by the time the warm-up is over. With that being said, you want to be able to adapt as the match goes on so that your game plan never becomes stagnant. Here are the best ways to read your opponent and do what every player wants to do: win more matches!

Do they prefer to hit forehands, or backhands? Do they run around one every time, hiding its weakness? Take note of that early on. If they are only hitting forehands in warm-up, chances are it is because they want to only hit forehands all day! Do they skip volleys or overheads? Do they practice slice backhands? Players usually practice their strengths, and ignore their weaknesses during warm-up sessions. Don’t just hit balls aimlessly during warm-up. It is as important to get to know your opponent’s game as it is for you to get loose and ready for the match yourself. They go hand-in-hand!

When your opponent comes forward to warm up their volleys, notice where they stand. Are they trying to move forward aggressively? Throw in some lobs. How do they handle them? It is critical to get to know how your opponent is going to approach the match tactically, and this will give you a lot of information.

Does your opponent only practice their first serve? Do they smash the ball as hard as they can? Or, are they hitting different types of serves, mixing up pace and spin? Are they hitting the ball right down the middle every time or picking their spots? It is very important to try and recognize patterns in their serve so that you can have the best chance of being prepared during the match.

Don’t be afraid to adapt!

By the time the first serve of the match is hit, you should already have enough information from the warm-up to have a solid game plan in place. It is very important that you stick to the gameplan, at least for a few games, to see how it stacks up in live action. With that said, if your plan does not seem to be working, don’t be afraid to adapt on the fly! You always want to play with a purpose. So, if you thought you wanted to hit to your opponent’s backhand, but it turns out that is their stronger side, then start hitting to their forehand. Play each point individually, and with a purpose. You don’t want to stick with a plan that isn’t working, but you also don’t want to run around the court aimlessly retrieving balls and spraying them all over the court. Think of yourself like a computer, constantly processing information and using it to optimize your game.

You may have always been taught to recover after each shot to the middle of the court. That is a great strategy, to a point. If you are pulled out wide, you certainly don’t want to stay there and hope the next shot comes back out wide. However, you don’t always want to be in the middle of the court. You want to recover to the  middle of the area where the ball is most likely to be hit on the next shot. If you are pulled out wide to your forehand side, chances are that the next shot will be coming cross court as well. It is much more difficult to change direction on a ball, so in that case, you probably want to recover halfway between the hash mark and the sideline. Sure, you may get burned sometimes if they hit a great winner, but tennis is a percentage game, and this will give you the best chance in any given rally. Tennis is played diagonally, rarely in straight lines. Keep this in mind and you will be in a better position to be the aggressor!

Do you have any other thoughts on how to read your opponent? Let us know in the comments section!