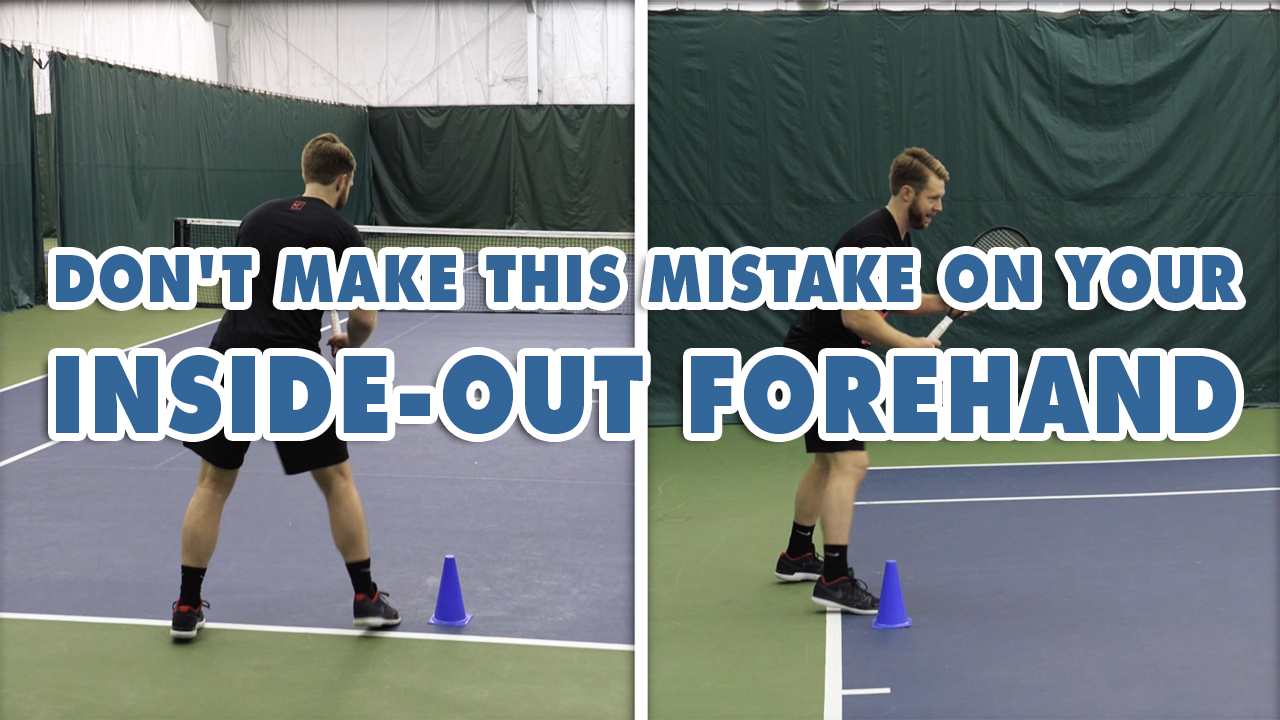 Today we show you a common mistake a lot of players make on their inside-out forehand. This video is for players with a PlayYourCourt rating of 50 to 79.

– [Scott] Hey guys Scott and Nate here from PlayYourCourt.com, and today we’re gonna talk about a common mistake that we see on the inside out forehand. Hey guys, today we’re talking about the inside out forehand and one huge mistake that we see a lot of players make. To be clear, this video is for Player Court ratings of 50 to 70 if you’re not in our community, or familiar with our PlayYourCourt rating system, that is the equivalent of a 3.0 to a 4.0 USTA player. we’re supposed to be running around some of our backhands in the middle of the court, we’re supposed to attack, and hit some inside out forehands. But we as coaches see one huge mistake that a lot of players are making is they do this inside outmaneuver. What is that mistake?

– [Nate] Yeah we certainly do, and the mistake that’s killing our inside out inside in forehand is this moonwalk to the ball. And just to clarify, it is fine to be liner in getting to your front foot or an inside out and an inside in forehand, when you’re moving up to the ball. But it always initiates with moving around first. So what we tend to see is run a ball that’s deeper where you’re fighting for position, that instead of moving circular and then up to the ball, that we’re actually just moving backwards in a moonwalk if you will that creates this liner position with the hips. And it’s just a big mistake because with the hips being closed it really limits the angle in which you can strike the ball. With the hips open, we can get a whole lot more angle, and get that ball off the court.

– [Scott] Absolutely, and guys you may be sitting there at home wondering is this something I’m doing? We’re gonna show you a quick drill to really illustrate visually exactly what we’re looking for here. So let’s take a quick look.

– [Nate] As you guys can see we have Scott set up next to a cone here, and we’re gonna first demonstrate the wrong way to do this. The moonwalking, Michael Jackson dance move, and this is what we don’t want you doing. Here we go. It’s not a bad forehand, but as you can see, Scott quickly had to make an adjustment step because moving backwards in that manner didn’t allow him to be balanced, and it didn’t allow him the rotation of his hips to create the angle off the court. Alright, so now we’re gonna show you the correct way and this is gonna much more in a circular method, alright? Let’s go back inside out here again, Scott. Here we go. Let’s get another one. Alright, so Scott, really easy getting out away from the ball and as we’re gonna show you, he can easily go inside into the same exact movement with the feet, and all that’s gonna happen is with the hips being open, he’s gonna make the contact a little bit further our front, and be able to hook it back down the line to the inside in. I’m gonna move out of the way after seeing those forehands. Alright, let’s get two more inside in here, Scott. Let’s go.

– [Nate] I’m out of balls. You only get one chance and you missed.

– [Nate] And we’re back, because Scott wants another chance. Kinda little close there, weren’t you?

– [Scott] Depending on the wide, but we’ll stick with it.

– [Nate] Alright guys so in summary, when you’re moving to your inside out, inside in forehand, make sure that you’re moving in a circular manner. It should be a half circle and then up to the ball. We’ve gotta avoid this moonwalk to the ball where we close our hips off. Now it’s fine if a ball is short, trying to find the left foot to drive the ball, that’s preferred, but we still wanna move out and away from the ball and then up.

– [Scott] Absolutely, guys, also, it’s important to realize, we don’t know a ton about you or your skill level, this instruction is good, for like we said, PlayYourCourt rated players 50 to 70, but we’d love to know a little bit more about you and your specific skill level, so we can offer you some instruction based on what you have going on. So do us a favor, click the button below, answer a couple of quick questions for us about your specific skill level, and we’ll send you some video coaching based on what you’ve got going on. Just click the button or the link below and we’ll do the rest.