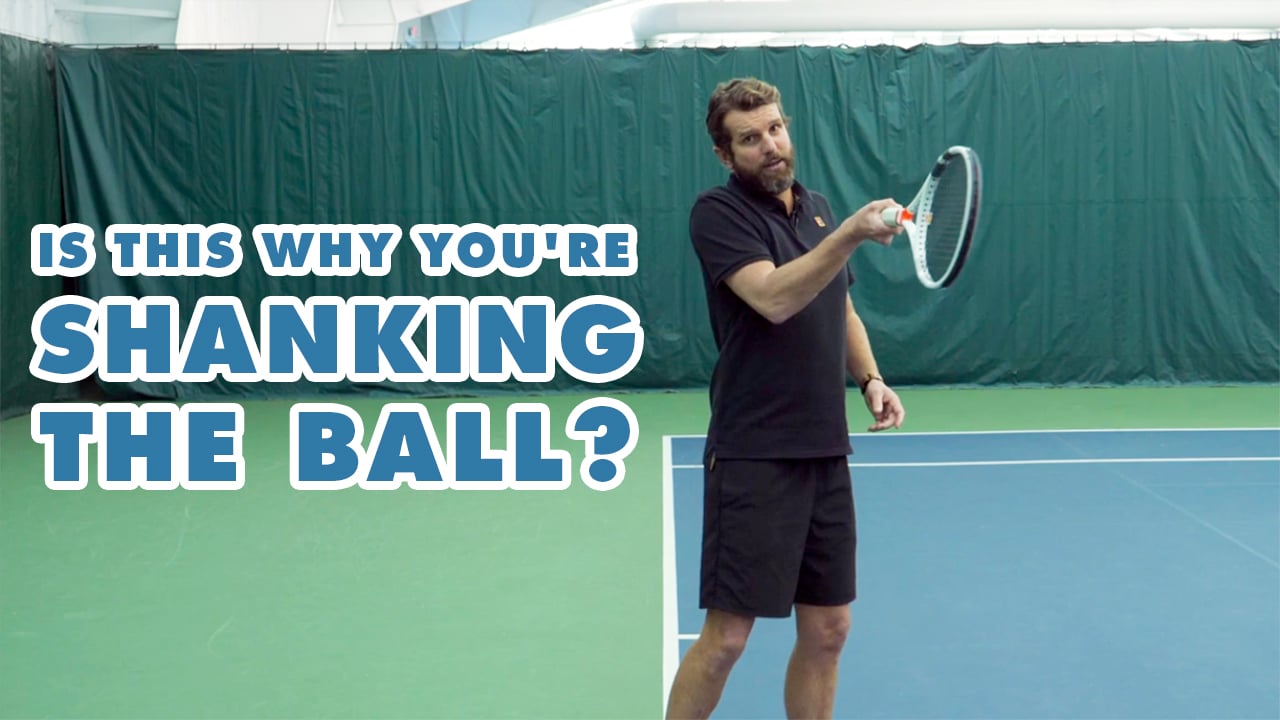 Today we show you how to “track” the ball better and eliminate your miss-hits. This video is for players with a PlayYourCourt rating of 60 and below.

– [Scott] Hey guys, Scott, and Nate from PlayYourCourt.com, and today we’re going to talk about tracking the ball for better contact. Alright guys, so today we’re talking about tracking the ball for better contact. To be clear, this video is for players with a PlayYourCourt rating of 60 and below. If you’re not familiar with our rating system or our community, a PlayYourCourt rating of 60 is the equivalent of a USTA three-point-five. So, Nate’s gonna go ahead and take it from here.

– Alright guys, so we’re gonna talk about how to track the ball for better contact. Alright, what is tracking? Tracking are visual cues to what we’re looking to get an indicator of the path of the ball. So, how do we know if the ball is going deep? The thing that we’re looking for is a ball moving high above the net, typically at least four feet, but on an average, six to eight above the net. And the ball moving fairly fast. And that’s gonna give us a pretty good indicator that the ball is coming deep, we need to move away from the ball. If the ball is below four feet, we still may need to move up to the ball, but if the ball is particularly fast, we don’t need to overplay by rushing the ball. And if the ball is below four feet and going slow, we really need to hustle up to this ball. So one of the major mistakes that we see with contact due to a tracking error, is that we rush up to a ball, and we try to hit it while it’s ascending. And so this may look familiar, but some of us out here are moving up to balls and we’re getting caught with this chicken wing jammed up. And we think it’s a faulty forehand, and what it is, it’s faulty tracking, leading to poor contact. So what it should feel like is the racket is using gravity to fall, and work up the ball. And if we’re not feeling that, there’s an error unless we’re intentionally driving. This typically happens at a much higher level. So, let’s back it up for a second. So, how can I fix this problem? The ball is coming in heavy, it’s got a height above six feet, it’s coming in fairly fast. What I’m gonna do is, as I’m taking my racket back through its unit turn, I’m also going to move my feet to get away from the ball, let the ball descend, let the ball drop, and this may be more than two steps. I may have to find myself all the way back behind the court, and from here as the ball is descending, I find gravity, to help me hit through the ball, creating better contact and a better swing path. So, that’s gonna really help us with some of the deep balls. With the short balls, again we’re looking for a ball that’s below four feet, and we’re looking for a lack of speed. And on this ball we wanna be a little quicker up to it. One of my favorite sayings is fast feet, slow hands, or hurry up and wait. Right, because that’s really what we’re doing. We’re gonna get up to this ball, really fast, and then we’re gonna slow down and move our feet to get into position. So what we’re gonna do now is Scott and I are going to show you a drill without rackets to help us track the ball and improve our tracking for better contact. Alright guys, as you can see we’ve got Scott to join us and we’re gonna practice tracking the ball. And as you’ve noticed, we don’t have tennis rackets. All we need is this tennis ball. I mean really any ball we can practice tracking.

– [Scott] So it’d probably be a tennis ball.

– Don’t use a football, alright, but any ball, and preferably a tennis ball is preferred. So, we’re gonna go ahead, we’re gonna show you what this looks like. We’re gonna demonstrate this now. Alright guys we’ve got Scott back at the baseline. One of the major things that we’re gonna focus on here though is when Scott goes to catch this ball, he wants to put an emphasis on keeping his elbow in, and this is going to kind of demo what your forehand would feel like. Alright, obviously if you’re reaching out for the ball, you’re gonna be out of your strike zone. So catching the ball, we want that elbow in, to make sure that we’re tracking to the correct strike zone. Alright, the first one that we’re gonna do is we’re gonna get Scott moving with a drop step, perhaps a side shuffle, letting that ball descend to a second bounce. So you can see where he would have been swinging low to high. We’ll do it again. We’re giving him a little bit more height, a little bit more depth. Alright, now let’s go ahead and demonstrate that real quick, what it looks like when we’re doing it incorrectly. He’s got a lot of height, he’s moving up to it, alright and obviously jammed up. The strike zone gets really complicated, so there backing up is obviously going to be the solution. Alright, so now I’m gonna leave the ball a whole lot lower. We’re gonna have those margins where the ball is below four feet on the net, it’s gonna have a lot less pace. I’m not throwing any of these super hard, but this one’s going to be pretty light. Let’s get him moving. Let’s do it one more time, a little bit tougher. Let’s get him moving. You’re limber for a big guy.

– Alright so get out there with a buddy, with your friends, and try this. This is something that seems, I know it seems very kind of simple, but it’s actually a drill that we did in college, and that you’ll actually see a lot of the pros do. Now, they will make it more dynamic. If this is relatively easy for you, let’s make it a little bit more difficult with two balls. So here I go deep to Scott, he’s catching, he’s gonna toss it back to me, and I immediately give him another ball, that he’s moving to. So now we speed it up by introducing two balls to him. Let’s do two more. You missed one man.

– Gotta hit that cardio my dude.

– [Scott] I know. Alright, an awesome drill where he’s working on tracking the ball and immediately if he gets out, hits, he’s gonna start realizing, he’s gonna be watching the ball closer to see what height, what speed it’s clearing the net, and he’s gonna be able to swing more efficiently for better contact. Practicing this simple drill, you’re gonna improve your tracking in no time.