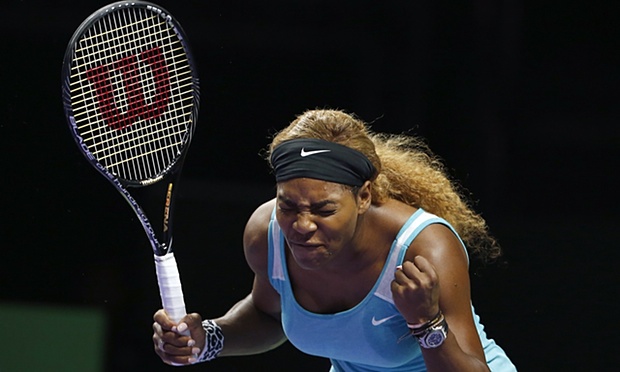 Serena Williams is a lot of things. She’s a certified superstar whose fame transcends tennis,  and she’s on track to be the greatest player of all time. She inspires people, old and young, tennis players and non-tennis players, to believe that anything is possible. She is polarizing, as her achievements and her controversies spark debate across the world. She is, undoubtedly, great for the game. However, as is so often the case with American superstar athletes, she is also a headline thief, and a prima donna whose ego is massively inflated by her accomplishments and the unending attention from the media. This is only partially her fault, as the praise and spotlight are often rightfully warranted, but it has reached a point where it is laughably overblown, and I just can’t stand it anymore.

Serena is so accustomed to the spotlight, and the tennis media is so used to giving it to her, that they are seemingly completely incapable of functioning without each other. This has come to a head recently. She announced at the end of September that she would be sitting out for the remainder of the season. This was newsworthy as it came on the heels of the most painful loss of her career, falling in the semifinals of the US Open to unranked Roberta Vinci, just two wins shy of completing the Grand Slam. However, this was a personal decision, not one decided by injury, or family issues, or anything else. She needed to “find her motivation” again. This was enough, I’m sure, to infuriate her WTA counterparts whose seasons paled in comparison to Serena’s historic 2015.

It also would have seemed, to the uninformed, that the spotlight could be finally be shared with any number of other talented, marketable players. However, this left a void that Serena and her media cohorts just couldn’t help but feel the need to fill, quickly, and incessantly with uninteresting fluff that they call “stories.” First it was countless reports of her possible relationship with rapper Drake, and the effect that he had on her stalled run at the Grand Slam. Turns out that they were just friends, but Serena never confirmed or denied this, and let the media exhaust the story relentlessly. Then, reports come out about her new, and allegedly real, relationship with one of the co-founders of Reddit. Maybe I am just overly cynical, and this is important, breaking news to the masses. But certainly, it can’t be. Meanwhile, Radwanska makes an unprecedented run to a WTA Finals victory, and it is pushed below the newest, and most hilariously bad Serena story.

If you are reading this, I am sure you heard about Serena’s phone being almost stolen by a thief in San Francisco. Someone grabbed her phone, and she “chased” him down and got it back within seconds. Phones are stolen all over the world every second. Mind you, there is still tennis being played at the highest level around the world. There are also presidential debates happening, major plane crashes, regime changes in third world countries, and natural disasters affecting the lives of millions. And yet, Serena’s phone being almost stolen made the front page of CNN, the NY Times, and countless other worldly news outlets. This is a JOKE, a sick joke, clearly being played on us by Serena and her media “pals.” This needs to stop.

If I didn’t read one more word about Serena until the lead up to the Australian Open, when we can read a real article about the state of her tennis game, then I would be ecstatic. I don’t care about her next boyfriend, how she slept on a Wednesday night in a hotel bed, or the latest on her iPhone. For the record, I wish that thief got away. Maybe he would have put the phone up for auction on the black market… perhaps they could have written a halfway decent article about that. I’m also pretty sure she could have afforded a new phone. I’m just glad that in the entire 8 second ordeal, that her appetizer didn’t get cold. I can only imagine the fun the NY Daily News would have had with their beloved Serena eating lukewarm calamari.

Give it a rest Serena, and tell your buddies in the news to do the same.