Tennis Player Sends Umpire To Hospital - Is Tennis In Trouble?
Skip to content

Tennis is a gentleman’s game. It always has been and it always will be. But, wait a minute. Is it? Will it always be? Long gone are the days of playing in long pants/skirts and wearing all white (save for Wimbledon.) With this progress, the stale air of elitism that shrouded the sport for generations is melting away.

Is this really a good thing? Most would say yes. It is. Tennis has allowed personality into the sport, and marketers, for one, adore it. John Mcenroe paved the way with his on-court outbursts. Andre Agassi rode his bad-boy image all the way to millions of dollars in endorsement deals and opened tennis up to a larger audience.

It would be hard to argue that tennis has been hurt by taking the audience out of the country clubs and into the masses. But… tennis has lost something.

It has lost what separated it from all the other sports. It is no longer a gentleman’s game. Tennis is on a slippery slope, and if it doesn’t reign in its image, it’s decline will be swift. The same personality that attracted new viewers is in danger of chasing them away just as quickly.

In a quest for social media followings the younger generation of players are kicking sand into the eyes of the sport that gave them their platform. These days tennis news is as much about the greatness of its top players as it is the nonsensical suspensions, fines and other scandals that its players are bringing upon not only themselves, but the image of the game. 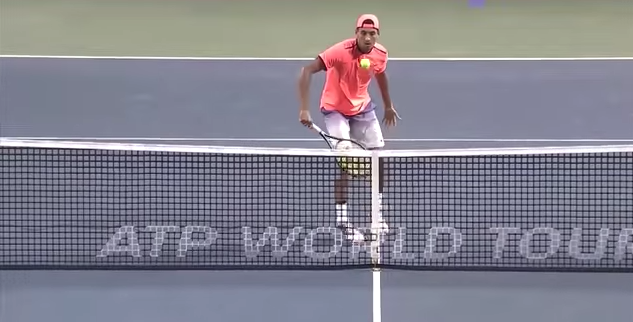 Nick Kyrgios is the perfect example. His countless childish outbursts and corresponding punishments have undoubtedly altered the career trajectory of what is sure to be the game’s greatest young talent. His millions of fans are grossly outnumbered by the millions that would rather change the channel to watch curling than watch another of his meltdowns.

I wish that Kyrgios was the lone black spot in the game, but we are seeing more and more of it. He wasn’t the first, and surely isn’t the last. Serena Williams, the greatest female player of all time, will also always be remembered for berating linesmen and umpires.

This past weekend, in the first round of the Davis Cup, tennis reached a new low.

Playing in the final match of a first round tie against Great Britain, 17-year-old Canadian phenom, Denis Shapovalov, missed a backhand. Rather than taking a deep breath and going to the towel, he aimlessly blasted a ball towards the stands.

This would have been an issue in and of itself, but the real issue is that the umpires face got in the way. The umpire was taken to the hospital, and Shapovalov was promptly disqualified from the match. This handed the Canadiens a 3-2 loss in the Davis Cup, and a major setback for what promises to be one of the game’s brightest young talents. Have a look:

The Future Of Tennis

So where do we go from here?

Surely there must be a middle ground. I certainly am not suggesting that tennis should no longer allow personality into the game. Robots batting a ball back-and-forth across the net won’t move the needle. Tennis is a business, but it can be a successful one by honoring the respect and values that brought it to the world’s stage. Kids will be kids, but that is no excuse for not being able to handle the spotlight that they are thrust into. They are surrounded by tennis coaches, fitness coaches, mental coaches, nutritionists, and psychologists. Certainly they are prepared enough to handle themselves like professionals regardless of their age.

With the amount of money at the top of the game, it is unlikely that fines are enough of a deterrent for players engaging in these barbaric on-court antics. Examples need to be made. Kyrgios, by now, should have had multiple lengthy suspensions. Yet he has not had a single suspension long enough for him to even miss the game.

Penalties need to hurt these players as much as their punishable offenses hurt the game. Tennis’ governing bodies need to stop worrying about short term losses that come from losing players at flagship events. Instead, they must look at the upside that will come from the mental rehabilitation of its offenders.

The “big picture” is an overblown cliche, but it is one that needs some serious attention here. If you look at Williams securing her status as the most decorated Grand Slam Champion of all time while Federer simultaneously adds to his sterling resume, you think Tennis is in a golden age. But that’s not the big picture. That’s the current news cycle.

When I look at the big picture, I see a troubling trend. I see the game being disrespected by those who are supposed to carry the torch into the next generation. Federer won’t fix that. Neither will the Williams sisters. As fans, all we can do is sit back and hope that the throne will be handed down to the hands of young, capable, respectful superstars.

I’m crossing my fingers that those in a position to steer the ship won’t take this job for granted. The sport depends on you. Make us proud.

5 thoughts on “Tennis Player Sends Umpire To Hospital – Is Tennis In Trouble?”