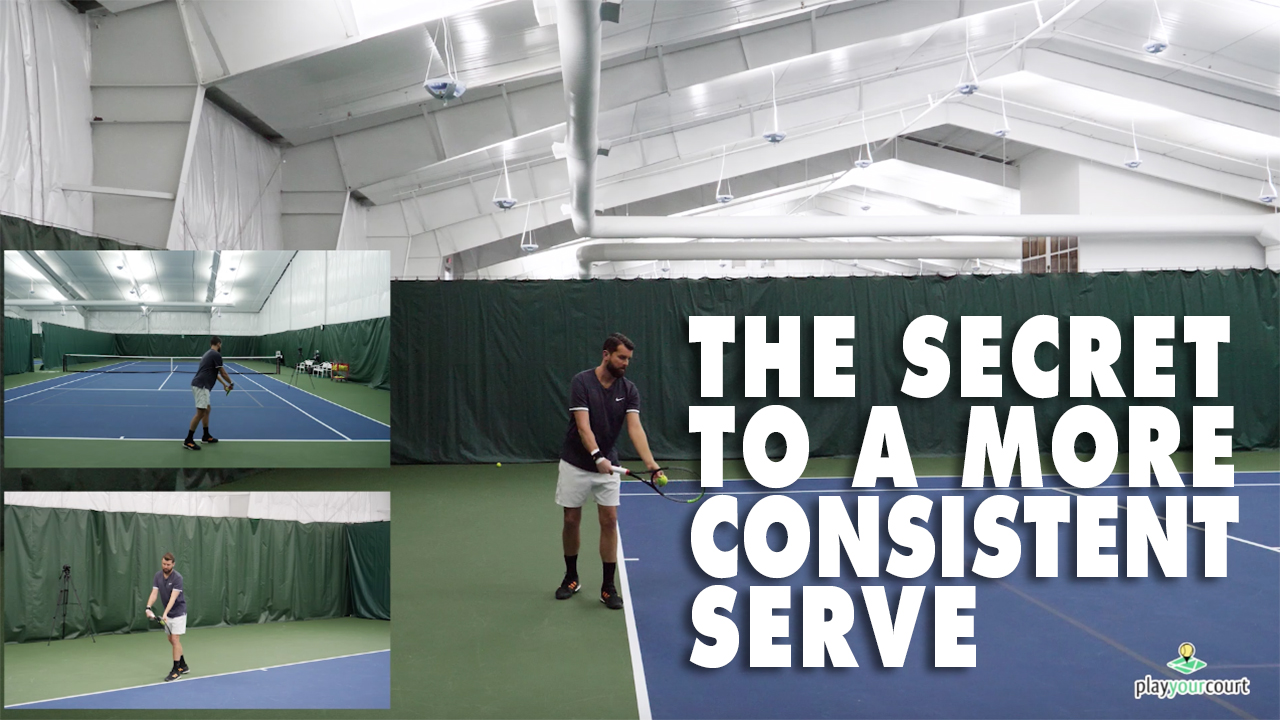 Is your serve awesome in practice, but falls apart during matches? Master these 2 things and you will have a consistent serve.

Hey guys, it’s Nate with PlayYourCourt.com and today we’re talking about the serve killer that may be affecting performance in match play. Alright guys, so your serve is awesome in practice, but good gracious, you get out there in a match and it’s just falling apart.

Getting a Killer Serve

Today, we’re talking about what this specific serve killer might be, and today’s instruction is for players for the player court rating of 16 and up. If you’re not familiar with the rating system, definitely get in the platform, check it out. Alright, the serve killer, what are we talking about? It has a lot to do with the toss, if not everything, and then timing and tempo. We’re going to jump in and show that to you right now.

So I know we’ve done a lot of tips on the toss, and you’ve seen a lot, and this one’s going to be a little different ’cause we’re going to talk about multiple factors. The honest truth is if your serve is great during practice, and then it’s suffering during match play, there’s something, there’s a disconnect, right? It’s your nerves. The serve is the only time that we can control every single thing that we’re doing, and the reason that you’re probably serving well in practice you get unlimited serves.

There’s not the pressure. It’s really difficult to recreate the pressure that you face in matches. So what we know is that sound fundamentals are the least likely to break down, and if you have a toss that may not be quite right, or timing and tempo that’s maybe not quite right, it’s going to break down because nerves are going to show it. Nerves are going to allow these fundamentals to be at their very worst. So let’s get into it. So like the toss, we have multiple ways that we can toss the ball, and we’ve talked about in other videos about how sometimes throwing parallel to the baseline is a little bit more advanced, we suffer, that you can bring the ball over more to like a one o’clock if that’s easier for you, and we’ve even talked about specifically what the hand should do.

We’ve talked about the hand blossoming like flower, that’s my favorite Scotty tip. It’s a good one though, right? But, that doesn’t apply to everybody, because there are some players that are tossing with the hand, the palm up that just still can’t stop rolling the wrist. I’m a big fan of the ice cream cone. It’s been around for a long time. We’ve all heard it. It’s definitely worth going over. If it works for Federer and it works for Ivo Karlović, two of the best servers the world has ever seen, it may be what we need, alright, and the ice cream cone is exactly what is sounds like. I’m going to hold the tennis ball as if it’s an ice cream cone.

Breaking down the serve technique

By getting the rest of my fingers off, I’ll have, you know, my middle finger just slightly under the ball to help with support, my ring finger right under neath for support, rather. What I’m going to focus on is allowing that ball to release, and here I’m going parallel. So maybe you want to get parallel, and you haven’t figured it out, and going palm up leads the ball away from you, this might be the fix. Let’s go ice cream cone, and then toss it up, and really try to eliminate spin here. A little better.

You can see that Federer really has this, the left hand leads, but he has this certain gate to his serve that is unique to his own. You see Raonic having his own kind of signature in his serve. Becker, think about the rock. The rock. That was his because that is what gave him timing and tempo. By establishing what your very own timing and tempo is, you have this ritual that you can rely upon, so when you step up to the line, it’s the same over and over again. So if you’re out there and you’re not sure what your serve looks like, and your not sure what the timing and tempo, what the tempo of it is, this is what we need to be examining. In order to help isolate the shoulder in the toss, I like tossing with the hip, and what you’ll find here, we’ve talked about in other videos the rituals that all pros use, what’s important is that is that when I go back, and I allow the racket to draw back, I’m going through the racket path.

With my toss here, I’m going to get my weight shifted forward, and you can see these things happening in order. So from ball toss, I’m going to my back foot, and as my weight comes back forward, you can see the ball is rising with the isolated shoulder. So we’re putting all together here, guys. I’m using tempo to improve my timing, I’m isolating the shoulder, and then from here, I’m using the ice cream cone release, and then from there I’m going to put the ball where I want it. If it’s a flat serve, I’m going to let it liss a little bit more out into the court. If it’s a kick serve, I’m going to let is liss a little bit more behind me. This is really important. This is something of these three things, or what’s breaking down that’s causing our serve to suffer in match play, and in practice, we can kind of get away with it. We’re relaxed, but these three things, if we can get these three things figured out, you’re going to have an awesome consistent serve in no time.

All right guys, thanks so much for watching today. I really hope you got a lot out of today’s video. There’s nothing worse than having a serve that’s breaking down, that feels unreliable, inconsistent, that you’re dreading to serve, so put this stuff into practice. Isolating the shoulder, working on the two different methods of tossing the ball, and then working on the timing and tempo. If you liked today’s video, please hit “like.” If you never want to miss another video, hit “subscribe,” and give it a chance. Get in there, check out the platform. It’s an entire ecosystem where we’re going to help you improve your game and hopefully grow the awesome game of tennis. Thanks for watching, guys. We’ll see you soon.

Click here to get your custom video coaching: http://bit.ly/2RuhQNu