Who is the Greatest Tennis Player of All Time? - Play Your Court Tennis Tips and Information
Skip to content 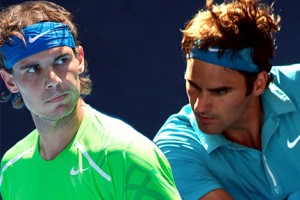 In the last few years there has been a lot of talk about who is the greatest tennis player of all time. You may have even seen the Tennis Channel Special featuring the 100 Greatest Tennis Players. For tennis fans, undoubtedly the player who comes to mind is Roger Federer. Even the expert commentators share this sentiment. With Federer’s 18 Grand Slam titles it’s hard to argue with this claim.

But let me put a twist on this conversation and say I don’t believe Federer has proven to us yet that he is the the greatest player of all time. What about Rafael Nadal?

Before Rafael Nadal came on the scene, Federer was dominating the men’s game and almost seemed untouchable. Just as Federer was about to show us all that he was the greatest tennis player of all time, Nadal battled it out and took the Wimbledon Crown from Federer in the 2008 final — what many have said is the greatest tennis match to have ever been played.

Nadal showed the world that Federer can be beaten on one of the biggest stages in tennis. Since then, Nadal has transformed his game and is now dominant on not just clay courts, but hard courts. Currently, Nadal has a winning record over Federer on hard courts (7-6) and, of course, leads him on clay (13-2). Federer only leads him in wins on grass (2-1). Who would have thought? In their head to head rivalry, Nadal has 100% more wins than Roger. The numbers point to Nadal.

Most likely, Roger Federer and Rafael Nadal will meet in the Quarterfinals of the 2013 US Open. This will be a pivotal match not only for both of their careers, but also to the conversation of who is the greatest tennis player of all time.

Join the conversation about who is the greatest tennis player of all time on Play Your Court’s facebook page.

Written by Lee Garrison. Lee is a PTR certified coach who teaches in San Antonio, TX. Book a lesson with him today!