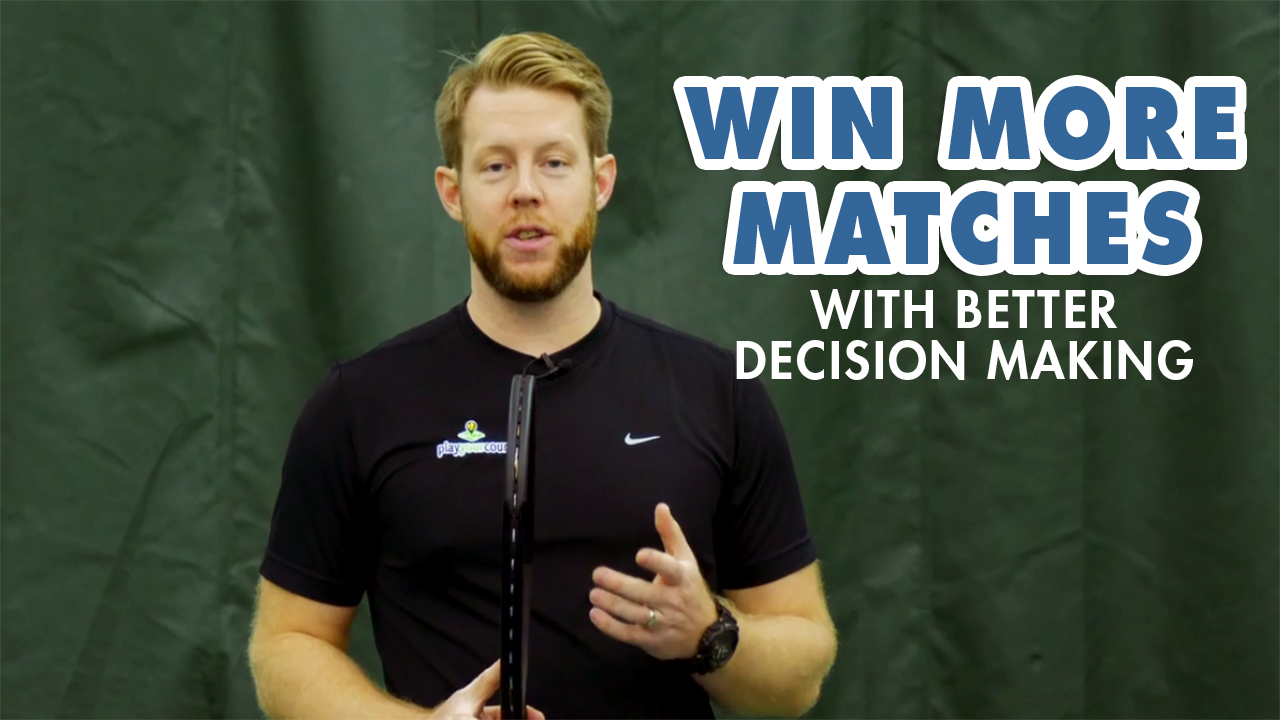 Want to win more matches? Well in today’s video we show you how to do just that by making better and smarter decisions on the court. This video is for players with a PlayYourCourt rating of 60 and up.

– Hey guys, Scott from PlayYourcCourt.com and today we’re gonna talk about how to win more matches with better decision making. Hey guys, today we’re talking about decision making and this video is for players with a PlayYourcCourt rating of 60 and up. If you’re not familiar with our rating system, a 60 in the PlayYourcCourt community is the equivalent of USGA 3.5, so let’s go ahead and get started here. One of the biggest reasons I see players lose matches isn’t because of technique, isn’t cause of really anything other than just bad decision making. They’re playing offense when they should be playing defense and they’re not recognizing opportunities when they really need to be attacking. So what we’re gonna do today is to really very simply break down when and how to play offense versus defense. So the first major adjustment I want you to make to your thinking is to realize that your decisions should be more based on where you are on the court, not where your opponent is. I know for a lot of us we see our opponent on one side of the court and we think it’s obvious that we should just hit to the other side of the court and there’s a little bit more going on here when you actually start to look at your position. So as you can see, I’ve used cones here to cut the court up into segments and the segment inside of these cones is what I like to call the attack zone. The reason this is the attack zone, I only have to take a couple of steps to get to balls inside of these cones. I’m not on the run, I’m always gonna be able to get balanced and really transition my way into the ball. This is where good things happen, this is where we wanna see you attack. I also wanna point out, if you’re faster like take Nadal for example, and you move to the ball very quickly and maybe you can get to a ball outside of these cones quickly and get set up and you’re way balanced in attack, then maybe these cones shift a little further out for you. If you’re extremely slow, maybe they shift in one or two steps, but the idea is, the inside third of the court or your attack zone, is the zone where you can quickly move to the ball, get your feet set, transfer your way and this is the time we wanna see you attack. So now let’s talk about the defensive zones, I think it’s pretty obvious, the defensive zones are the zones outside of these cones when we’re pulled really far out of position when we’re not able to get our feet set. Maybe we’re hitting on the run, or not able to step into the ball or transfer our weight into the shot. This is where you’ve gotta play defense and this is the number one mistake that I see with most recreational players all the way up to division one couch tennis players. They’re trying to play offense when they’re actually at a defensive zone, alright. So what I want you to think about and the decisions I want you to make, when you get balls on the inside third of the court or in your attack zone, this is where I wanna see you taking your risks, this is where you can hit the ball down the line, this is where you can try and add some power to do some damage, maybe even hit some winners, generate short balls, again, this is where the offense or where the good things should be happening. When you’re pulled outside of these cones, what I wanna see is nine times out of 10 a cross-court ball and the other time out of 10, is just gonna be a reset ball, cause you’re so far out of position that you need the time to recover to the middle of the court. So the number one mistake I’m seeing players make is they’re trying to play offense when they’re pulled outside of the attack zone, when they’re on defense, they’re taking this ball and they’re trying to do too much with it. The mistake a lot of players make and I see a lot of points end this way, even at a high level of play, is we see open space to hit down the line here and we don’t acknowledge that we’re so far out of position that we’ve got to really do something impressive, we’ve gotta hit an amazing ball down the line to not then just immediately get beat cross court. So again, acknowledge where you are in the court, it’s okay to get down the line from right here, cause you’re one step away from recovering to the middle. But if you can pull all the way out wide here and even down the line and that ball comes back crosscourt, you’re not gonna have enough time to recover and get back in position to get to that ball. So in summary, to make better decisions and to win more points, start focusing more on your court positioning, not just your opponent’s. Attack when you’re on offense, inside this middle third of the court and play more cross court and reset balls when you’re pulled out of position. I hope this helps, I hope you can bring this right into your game and win some more points. I really wanna see you improve, but let’s be honest, I don’t really know anything about you, so what I’d like you to do, click the button below, answer a couple of questions for me about your game, I’ll then send you some custom video coaching more tailor to exactly what you’ve got going on. Just click the button below and I’ll do the rest.