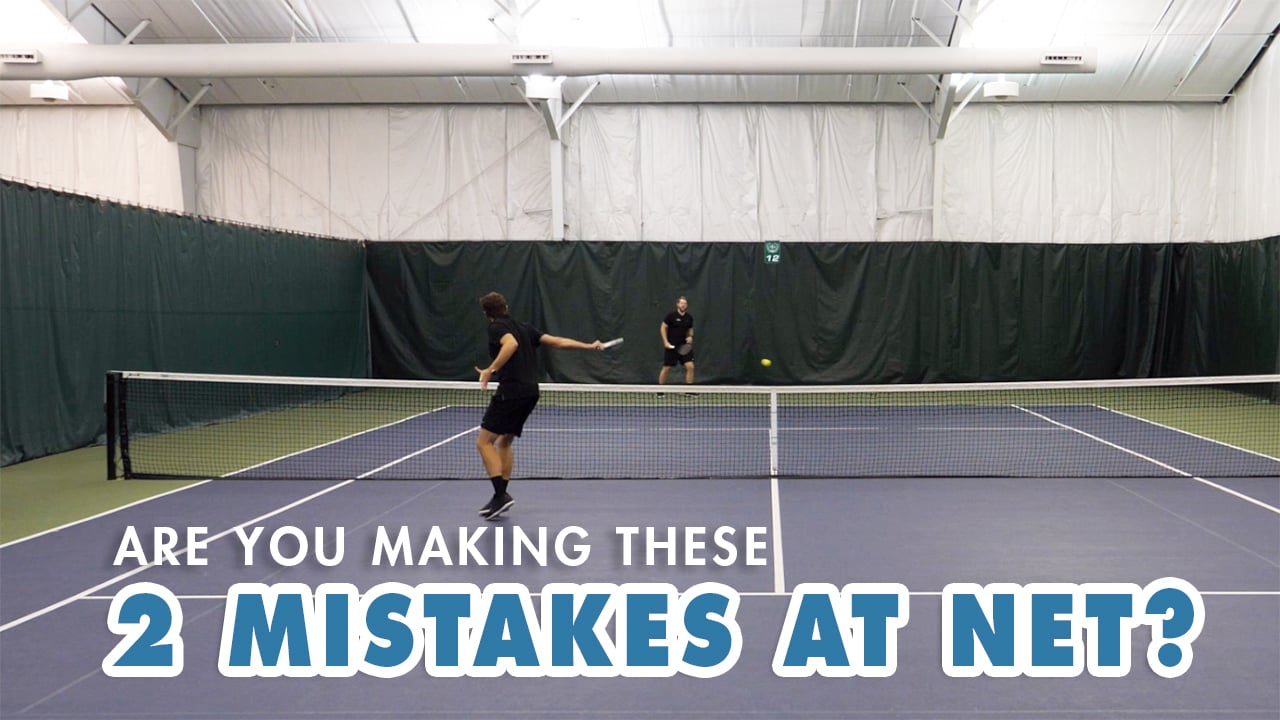 Are you having trouble at the net? Today we show you two common mistakes a lot of players make at the net. This video is for players with a PlayYourCourt rating of 79 and below.

– [Scott] Hey guys, Scott and Nate here from Playyourcourt.com and today we’re gonna show you two mistakes you’re probably making at the net. Alright guys, so today we’re gonna quickly run you through how to be more effective at the net by avoiding two really common mistakes that we see, this video to be clear is for players with a PlayYourCourt rating of 79 and below if you’re not familiar with our community, our rating system, a PlayYourCourt 79 is an advanced intermediate or a USTA 4.0, so if you’re around a PlayYourCourt 79, a USTA 4.0, or below this level, this video is perfect for you. Nate, I think a lot of us are scared to get up to the net because we get lobbed, we get passed, we’re not having success up there and so we just say you know what forget it I’m not coming to the net anymore. And I think what we’ve realized in our coaching careers is what’s causing this is just one of two mistakes. So if you’re not having success up at the net, even though you’re coming in at the right times, there’s a good chance you’re making one of these two mistakes. So Nate, what is the first mistake?

– [Nate] The net can be a scary place, there’s just a lot of room like Scott said, to get passed, to get lobbed. But one of the major mistakes that we’re all making when we’re moving forward is that we’re not following the ball that we’ve struck. So this approach shot, this transition, the ball that we’ve hit, we’re deviating from the path of the ball. Alright and so this idea, it’s pretty much like you’re tethered or your bungee’d to the ball that you’ve struck, alright. And so what we’re gonna do, Scott and I are actually gonna take a moment and we’re gonna demo what this mistake looks like.

– [Scott] So as you’ll see Nate’s approaching crosscourt here, but he doesn’t shift to cover the ball. So I’m able to just burn him right down the line. So as you’ll see the fix here, Nate still approaches crosscourt, but he follows his ball and is able to close the wide-open volley into open court space. So Nate hold on a second, did you just hit an approach shot cross court?

– [Nate] Oh my, the dreaded crosscourt approach shot. I actually did, so it’s a big misunderstanding that you cannot approach crosscourt. Yes, most of the time it’s gonna be viable to approach down the line and we know that when we approach down the line it shrinks the court, there’s less angles, but this is when it is a good tactical time to approach crosscourt, is when my opponent is out from the middle of the court and he’s out in the corner. So there clearly we saw Scott in the ad court, I’m approaching crosscourt and there it makes a little bit more sense with like a short angle.

– [Scott] Yeah so guys, just to clarify here, if my opponent’s standing in the middle of the court what would you say, 99 times out of 100, we’re gonna approach down the line because that’s gonna take time away. But if your opponent’s out of position, and you’re hitting into open court space, cross court and they’re running that ball down, all of the sudden it becomes a more realistic decision.

– [Nate] Absolutely, and I think just what has to be clarified is that it’s about following the ball if I approach crosscourt and as you saw, I don’t follow the path of my ball, it becomes very easy for Scott to find the down the line.

– [Scott] Alright, guys so let’s jump into mistake number two. Again mistake number one was not following the ball. So mistake number two, actually something pretty simple once we point it out to you. And it’s just paying attention, acknowledging the visual queues that your opponents are giving you to make sure you’re prepared for what’s getting ready to happen. So to give you a very specific example, Nate am I driving or lobbying here?

– [Scott] Okay and am I driving or am I lobbing here?

– [Nate] I mean that kinda looks like your forehand.

– [Scott] Clearly a lob. And guys it’s really as simple as this, when you hit the ball deep in the court, look at your opponent, are they doing this? If they are, they’re lobbing. If they’re licking their lips, and pulling their racket back and steppin’ into the ball, odds are they’re driving.

– [Nate] But Scott, what if they’re hitting a topspin lob?

– [Scott] That’s a great question, Nate. On a topspin lob, it may at first look like your opponent’s gonna drive, but what you’ll see is all their weight shifts to their back foot, if you see that front foot lift up you know they’re getting ready to hit up and hit a lob, so Nate bring us home here. What’s the summary?

– [Scott] Yeah, so guys in short, when we’re approaching the net the first thing that we wanna do is follow the ball. Don’t deviate from the path, pretend that you’re tethered to the ball and follow that ball so that you can cut off the angles in a better position. And the second thing that Scott went over, is that we’re simply talking about paying attention to what you see ahead of you. After you’ve hit the approach shot, you’re picking up visual queues and this is a lot like gambling, right? If you’ve ever played cards, everybody has a tell, you’re just paying attention to it more in gambling. But here on the court, let’s make smart bets when we’re approaching the net, pay attention to what’s happening in front of you so you can make the best decision possible. Alright guys, so I hope that video helped and again Nate and I just wanna see you improve your tennis game but the reality is we don’t really know anything about you. This video again was for PlayYourCourt rated players of 79 and below, if you’re above that or if you’re way, way at the bottom end of that, we might need more information to give you more custom instruction and help you with the things that you specifically need to be working on. So do this for us, click the button below, answer a couple of quick questions for us about your game, we’ll then send you custom video coaching based on your skill level, just click the button below we’ll do the rest.