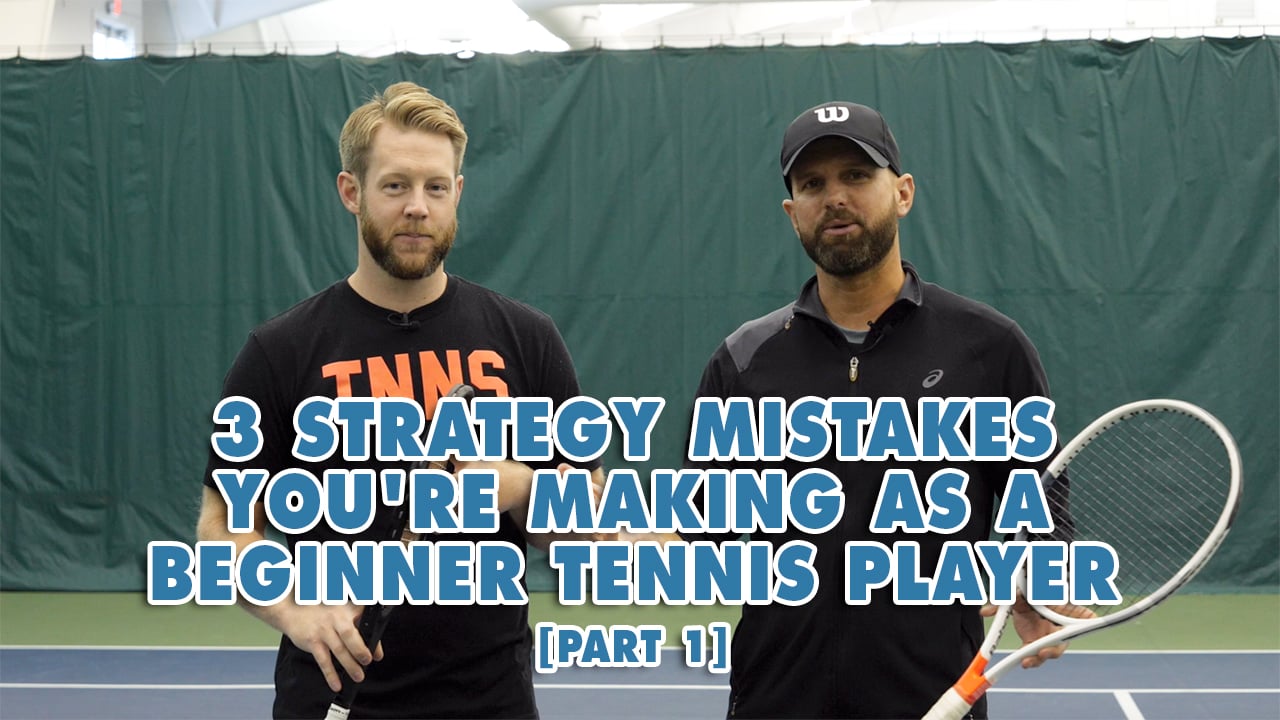 Today we show you the second of three common mistakes most beginner tennis players make. This video is for players with a PlayYourCourt rating of 60 and below.

Hey, guys. Scott and Nate from PlayYourCourt.com. Today we’re going to show you mistake number two of three that we see a lot of beginner tennis players making. All right, guys, today is part two of a three-part video series where we go over some strategy mistakes that we see a lot of you beginners making. This video is for players with a Player Court rating of 60 and below. If you’re not in our community or familiar with our ratings system, then Nate’s not going to talk to you any more.

I’m just kidding. Nate will talk to you. But guys, seriously, if you’re not in our community and you’re trying to improve your tennis game, you’re goofin’ up here. It is five dollars a month to join this thing. We give you everything you need to improve your tennis game. Definitely, at least, check this thing out. That said, if you’re not in the community or familiar with the ratings system, a Player Court 60 is the equivalent of about a USTA 3.5. So we’re really talkin’ about beginners, up to about a USTA 3.5. If you’re better than that, this video’s not for you. Turn it off. Nate

Guys, don’t be offended. He’s not saying if you’re 3.5, you’re a beginner, right? We’re taking from the beginning stages of the game. We’re not talking about the first time somebody’s ever hit the ball.

We’ve seen these mistakes happen all the way from beginner to 3.5. No harm intended, sorry. In this scenario, your team, a couple minutes left there on the clock. They’re driving down the field, and there’s a blitz. So, the defense is rushing in, and trying to get the quarterback. The quarterback drops back and just chucks it as far as they can, right?

Very familiar, unfortunately. All right, so as this QB is chucking it, it’s a Hail Mary because the chances of it being caught, are limited. We’ve been there. No, why are you throwing it? Just take…

So what are we talkin’ about on the tennis court, the Hail Mary effect? We’re getting into these stages and points when we’re on defense. We’re running for a ball, and we’re just trying to make a miracle happen. Lot of times we’re getting pulled out into the outer thirds of the court. We’re not balanced. We don’t have a whole lot of time, and we’re tryin’ to rip the ball down the line. Or we’re just tryin’ to hit an absolute screamer to get out of trouble. This is the Hail Mary effect.

In tennis, there’s a reset button, as well. When you’re being pulled out to the outer thirds of the court, and you’re in this distress, you’re in defense. Instead of the Hail Mary, what we should be focusing on is height, getting this ball up nice and high and resetting the point so that you can get back to middle.

To make this super clear, the Hail Mary version we don’t want you to do is, you’re pulled way out of position. You’re on defense. You go for an offensive ball by trying to rip the ball really hard down the line or by doing something that, upon further analysis, you probably don’t have a very high chance of executing. So, the reset button like Nate’s talkin’ about is the easiest shot to hit when you’re on defense. The lob is throwing the ball up, and like you just mentioned, givin’ yourself time to get back to the middle of the court.

All right, guys, as you can see there, I’ve moved Nate around, but I’ve pulled him wide… He, honestly, pretty easily could have thrown up a high ball to reset the point. Instead, he went for broke, tryin’ to hit the backhand down the line. There’s two problems with this strategy. One, and I want to highlight this ’cause you may see it but not recognize what’s going on. One, is he’s really, really far out of position. He’s be pulled completely to the widest part of the ad court, and he’s hitting as hard as he can down the line. Even if he makes that ball, there’s a good chance that I get to it and have an entire half court to hit into, and there’s less time for him to recover ’cause he hit the ball so hard.

So, mistake number one is taking a huge crack at the ball when he’s out of position. But mistake number two is just, straight out of the gates, you really should be throwing that ball up to give yourself more time to recover.

Recovery time, yeah… Now we’re going to take a look at the corrected version, where I’m going to play that reset button. I’m going to try to get there and get some big, heavy spin and try to get back to middle, so I don’t leave an open court.

All right, guys, as you can see there, pretty big difference. Nate, by just playing the reset ball and extending point twice, I get frustrated, right? I go for broke. I make the mistakes. So, in the first example, Nate goes for broke way too early. Basically, not even forcing me to beat him. He beats himself. In the example you just saw, he resets the point. Makes me hit more and better shots to actually win the point. You see there I break down with frustration.

Reset the ball. Get yourself back in the middle of the court and give them a chance to miss. Like, even there, I feel like I got back to neutral, maybe even found some offense to the point extended, had you not missed in the bottom of the net. But that’s all right. Guys, the takeaway today. When you are on defense, when you’re on the outer thirds of the court, when you’re deep in the court, heck, if you’re running up, and you’re barely getting to a ball, it’s not Hail Mary time. You’re not going to win the game–

When you’re on the defense, play defense.

Yeah. So at that point, especially on the back of the court, on the run, if they’re not coming to the net, throw up the reset. Give yourself time to get back to middle. Now, if they’re coming to the net, it becomes something else entirely. But that’s for another level. If they’re continuously hitting into the open court, and moving in, and cutting off with a transition volley, they may not be a 3.5.

So if you’re doin’ that, awesome. But, guys, if you’re out there and you’re not getting someone that’s cutting off the angles with volleys, or swing volleys, or whatever else, and singles, reset the point.

Perfect. And this brings up a great point, too. We don’t know a ton about your specific skill level. This video instruction wouldn’t apply to a high level of play. ‘Cause we are going to see those players close the net when they put you on defense. Do us a favor. We want to help you. We want to give you the specific things that you need to improve your tennis game. We want to do it for just five bucks a month. Do us a favor. Click the button or the link below. Answer some questions for Nate and I about your specific skill level. We’ll get you inside the Player Court community, We’ll get you inside the PlayYourCourt community, Every Tuesday, Nate sits down in his garage and really just thinks long and hard about you and your specific skill among all the great things you need to improve…

Not only that, we connect you with evenly matched players in your area, so you can get on the court and practice this stuff. I know for me, growing up, no matter what skill level I got to, it was always hard finding practice partners. We know you’ve got the same problem. Do us a favor. Click the button link below. Answer some questions. Jump in our community, and let us help your tennis game. We’ll see you guys soon.

Click here to get your custom video coaching: http://bit.ly/2XZCcTF