Are YOU Using The Right Stance For MAX Serve Power? -
Skip to content 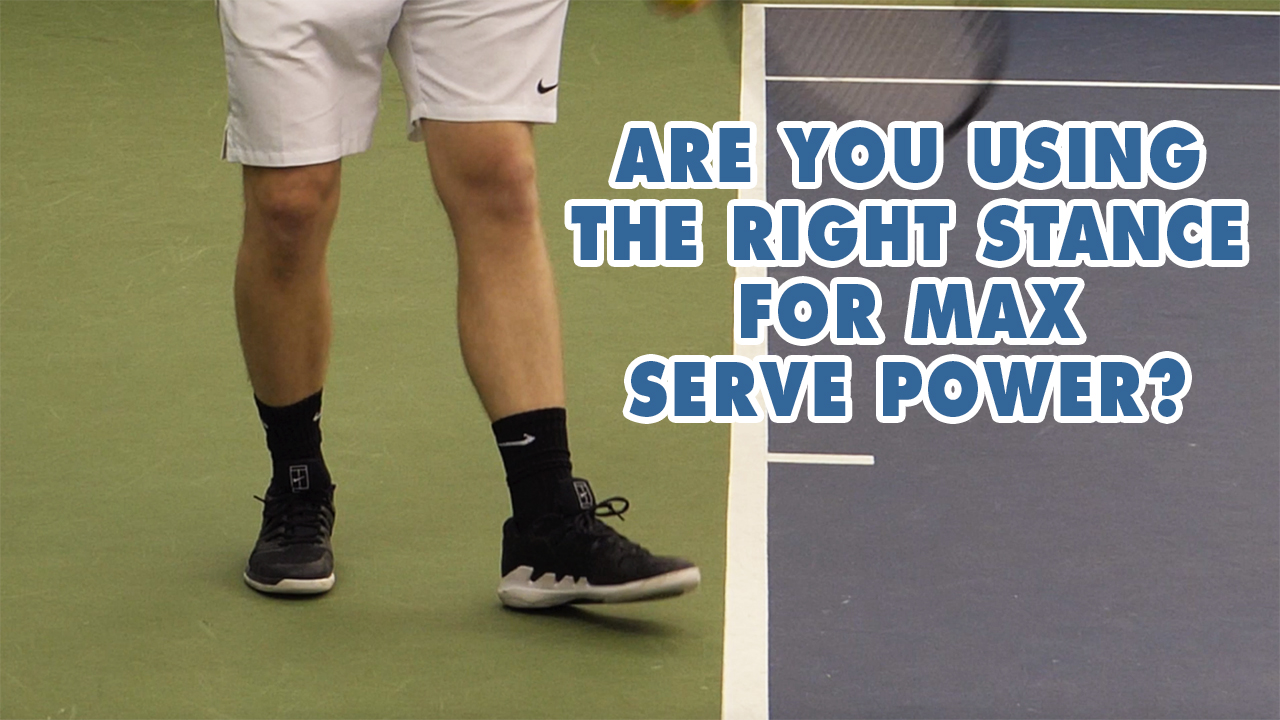 Today we show you two stances that will ensure maximum power on your serve. This video is for players with a PlayYourCourt rating of 60 and up.

We’re talking about the platform versus pin point. I know a lot of you guys are familiar with what that is but today what we’re really going to get dive into is, what are the advantages and what are the disadvantages? Because neither is necessarily incorrect.

Now I do have a preference, I will talk about that in a moment. First let’s talk about what they are, in case you don’t know what these stances are. And we’re talking about serving – what we’re really referring to is the plot, the platform stance, where we’re lined up and I’ve got my back foot at a greater distance. And you can still tell I’m toe to heel, I’ve got a pretty good position here but this is where I’m keeping my feet apart. I’m serving from this position, so as the movement works forward, I’m really going to push off with both feet.

Yeah but we have extreme versions of this because there’s examples like Gael Monfils, right? And think about what we see with Monfils, right? He doesn’t drag both feet together. What we do see predominantly is a platform stance and it is my preferred method. It’s what we saw.

Pete Sampras, it’s what we see with Roger Federer. And here is the advantage with the platform, is that it gives you the the ability to use both legs and really power up from the serve. Whereas the pin point you’re really using an imbalance, you’re still powering through both feet but it’s more of this imbalance forward that allows you to thrust up. But because we know our athletic stances is really knees under the shoulders, right? That’s going to be our loading position and give us maximum output up to the serve.

Even if you like pinpoint, I don’t think I would let you do it until you got to an extremely high level of play ’cause your balance is has to be unbelievable to actually get the same leg power or even close to it.

Well I would argue, I’d actually argue that I don’t know that it gets the same power. I think when it becomes a big advantage, is when someone is not firing off of one leg on the platform and that’s often times we’ll get them to go pinpoint. And what I mean by this is, let’s jump into demo mode, let’s get you to demo some serves here and we’ll talk about what’s happening on these.

Alright guys so we got Scott back here on the baseline and what we’re going to really focus on is this load in the platform stance. Scott naturally serves with a platform and what we want to make sure that we’re taking notice of, is that both feet are loading, exerting off the ground, creating that kinetic chain from the ground up. Alright, let’s take a look at it.

Okay guys, so on this example we’re going to show you where Scott is only loading off the front foot which is actually pretty common unfortunately but you’re really going to notice the deceleration as the only that left leg, the front leg, is pushing off the ground. He gets a little bit of push off that back leg but you’re going to see it kind of flare up, where it’s not on the ground long enough to really help with that maximum force up.

This is the mistake that robs us all of our power.

Okay guys, so there you can really see where just that one leg is robbing him of all this power and we’ve worked with a lot of students, juniors and adults that just cannot break this habit. The gait much like the gait of a walk in the serve, just something about it is broken where it’s not connected and at that point people may find that it’s actually easier to use the pinpoint and Scott’s going to demonstrate this now. And because this imbalance forward with the feet being together, it’s going to be way easier to load and get off the ground with both feet. So guys you can see both the platform and the pinpoint are both effective. There’s nothing wrong with either of them. It’s just a matter of are you pushing off the ground with both feet. Obviously we’re not here saying that Gael Monfils is using a inefficient form or in his serve, obviously the guy is one of the most athletic people in the world.

What we come across is that a lot of times people have a natural tendency to lean towards one or the other and our preferred methods is platform because I do think it’s more rhythm based, I do think it allows you to hit every point of the serve that’s absolutely critical for maximum output.

So play with them both but certainly the main goal here is to get off the ground and with both legs and that’s going to increase a ton of power. Because the power comes from the kinetic chain from the ground up.

For sure. Guys, hope this instruction helped as you know, Nate and I just want to see you improve your game. At PlayYourCourt that’s what we’re all about, we want to know more about you and unfortunately, depending on your skill, this video is actually not even really relevant to you. If you’re playing in a certain level, you’re definitely not worried about pinpoint serve stance yet. So do us a favor, click the button or the link below, answer some questions for us about your specific skill level. What we’ll then do is we’ll get you inside the PlayYourCourt community, we’ll send you custom video coaching, based on the things that you’ve got going on at your skill level.

Click here to get your custom video coaching: http://bit.ly/2KqBWVL