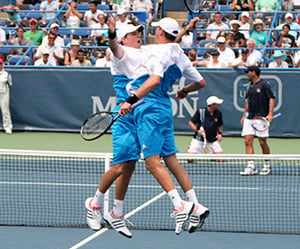 You would think winning 15 Grand Slam titles, 93 ATP tournament titles, finishing #1 in the world a record nine times, and earning nearly $22 million in prize money, they’d have nothing left to prove. But when Bob and Mike Bryan open play in the Delray Beach Open by The Venetian Las Vegas Tournament February 19, they are determined to win a South Florida tournament they’ve won twice, but in 2012 failed to get out of the quarterfinals. On their way to sunny Delray Beach, they warmed up at the US National Indoor Tennis Championships in Memphis, a title they won last year but lost in the finals Sunday to the #2 seeded team.

When Bob and Mike were interviewed last year at Wimbledon en route to another Grand Slam men’s doubles title, they admitted there are tough teams gunning to knock them off their #1 perch. They also realize they may not have too many more years left playing at the top of their games. Both are accomplished mixed doubles players as well, and they’ve both agreed to play less in order to give their full efforts to their number one priority. “We’re 35 years old,” said Bob. “We know we only maybe have three or four more cracks at (major titles like) Wimbledon.”

They are the only doubles team in tennis history to ever hold four major titles, and the Olympic Gold medal, all at the same time. Bob, the slightly taller lefty, patrols the deuce side of the court. Mike is right-handed and plays the ad side, giving them both forehands up the middle on most points. Both Sunshine State transplants originally from California, Bob will have a shorter drive to Delray Beach from his Sunny Isles home near Miami, while Mike will need three-plus hours to cross Alligator Alley en route from his Florida Gulf Coast home In Wesley Chapel near Tampa. As befits #1 seeded teams, they get a bye in the first round in the 16 team doubles draw. They hope to playing for another ATP World Tour Doubles Finals on Sunday February 23.

Despite some unkind words about the state of men’s tennis doubles recently by legend John McEnroe, the Bryan Brothers plan to bring their chest bump to a match against John and his brother Patrick in an exhibition at Madison Square Garden in New York on March 3. McEnroe told the Daily Telegraph that doubles may need to be abolished because of lagging interest and prize money. “Most doubles players, I hate to say, are the slow guys who were not quick enough to play singles,” said McEnroe.

Despite those comments, the Bryan Brother siblings say their footwork, communication and teamwork remain at a very high level. “We know where each other will hit the ball,” Mike said at Wimbledon. “We know where to fill the middle.” Don’t be surprised if the Bryan Brothers put John McEnroe and his brother in their place next month. The Bryans remain far and away the most popular of tennis doubles team as voted by fans in the past decade-plus, and hope to land the $26,100 doubles winners prize money on the line on national television in Delray Beach.