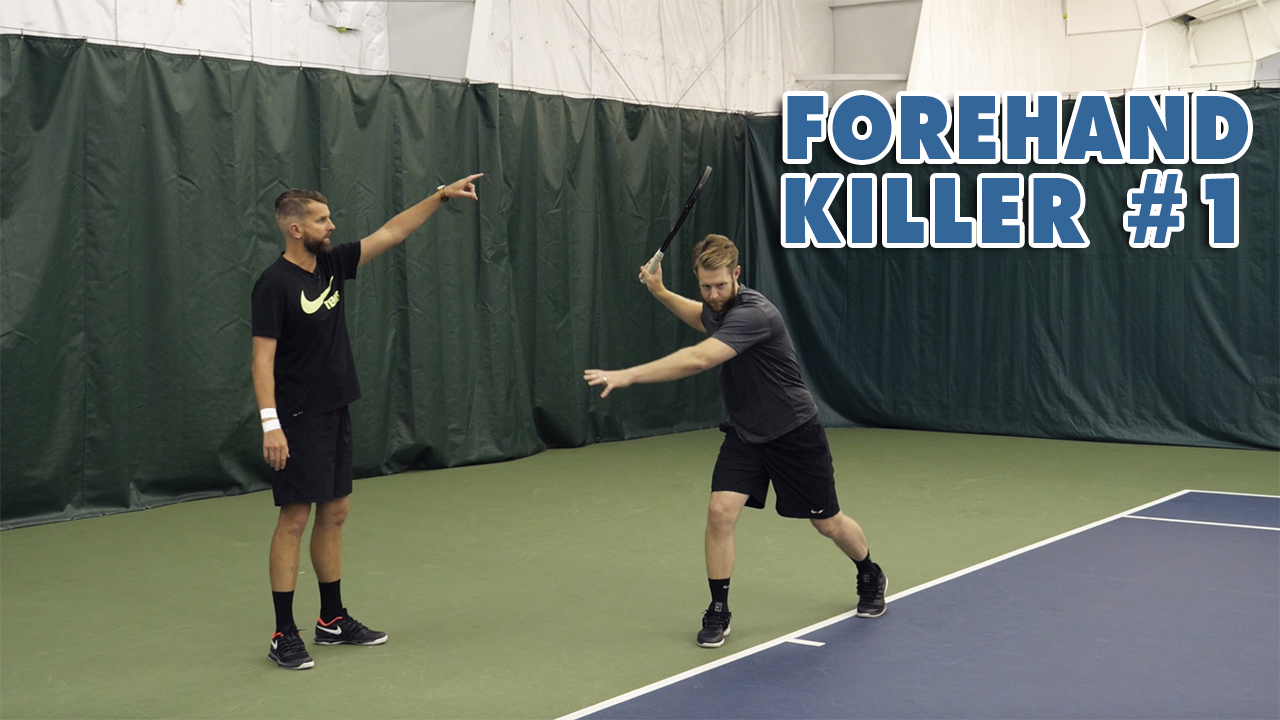 Today we show you the first of the three common mistakes a lot of players make on their forehand. This video is for players with a PlayYourCourt rating of 50 to 70.

The racquet is going to be here for a moment and then it’s going to be continuous movement as he loads the hip and enters the slot obviously with the lag. And this is where we’re getting most of our power is really working through it in one continuous motion. So the way that particular forehand works it’s a lot like a rollercoaster. So when the rollercoaster is getting up to the top, it may pause there.

You’ve been on rollercoasters that kind of torment you at the top. But once that bad boy gets moving there really shouldn’t be any slowing down. It’s going to pick up a whole bunch of momentum through the bottom of the bowl, you can imagine this bottom of the bowl surface area. And then it’s picking up to get through. So the disjointed forehand it’s really robbing you of all this power, your rhythm and your tempo. This is what this looks like.

So the disjointed forehand, Scott’s going to take the racquet back appropriately and then he’s going to drop the racquet. So he misses this whole back end of the stroke. Let’s see that again, Scott. So he takes it back and then it just drops. It elevator drops and he’s actually only at this point hitting from here. So you’re not using the momentum of the back end of the stroke.

So let’s maybe examine why this is happening. Some of you are simply just prepping too early. And it’s awesome to copy our heroes, Serena Williams. She has a really early take back. I mean she’s truly here for, there’s not much of a unit turn prep and then here. She immediately gets here with her hands separated. But if you’re doing this too early what ends up happening is you’re waiting and then all of a sudden the racquet drops. And you’ve lost that tempo.

I know for me too the mistake that I see a lot of players I coach are just trying to listen and they’re not connecting the dots here. They know they’re supposed to loop, and so they do this but then they settle in here, not realizing that the whole point of this loop is to start high and take that rollercoaster motion and drop in to generate that momentum. So a lot of it is like you’re listening, you’re just not picking up the cues that we actually want delivered which is start high, drop in to generate that momentum.

So here’s the fix. And this is what we’re going to focus on is Scott’s going to put a little more emphasis on the unit turn. And what he’s going to do is really try to time this unit turn that he gets to here before the ball has bounced on his side of the court. And then as he’s ready to perform the shirk he’s halfway there. So at this point now he’s through the loop and it’s continuous to the ball. So really the fix I think is focusing on the unit turn.

Not going all the way to the racquet take back, and just going, okay, unit turn, the ball has bounced, now I’m working through that timing. And then the tempo, it becomes a lot more fluid through the stroke.

Just to clear up confusion too, because in another video we talk about how to add power to your forehand by setting up early. This isn’t what we’re talking about. I think a lot of people when they hear set up they think I’ve got to have everything all the way turned back, everything as far back as it’s going to go. We just mean be on your way to getting into this fluid motion. We just don’t want you setting up so late to the point where the ball bounces and now you’re starting to make your unit turn. We want to get you halfway there so that it’s a fluid motion when it’s time to actually strike the ball.

All right, guys, so what you’ll see here is even though I start high with the loop my racquet just drops too early and I’m not able to generate very much momentum because I’m really just swinging low. The same way we would coach a beginner. When we coach a beginner we don’t introduce the loop yet. We have them start low and follow through high, and then as you progress to a higher skill level we add the loop because with the loop if you stop at the top and wait for fluid contact you generate way more power.

So let’s now take a look at what correct looks like. I think you’re going to notice one, a much more fluid motion and two, definitely a lot more power. Let’s take a look at that now. All right, guys, so as you can see this loop doesn’t really do a whole lot for me unless I pause at the top and get that fluid motion. You could see the first example when I dropped too early all of this was a waste, it didn’t do anything. But when I wait here and drop at the appropriate time I generate a way more fluid stroke.

It’s also important to know, guys, the forehand can become disjointed at multiple different phases of the stroke. So a lot of times it’s exactly what Scott just demonstrated, but sometimes it’s actually happening at the unit turn.

When I’m working with students trying to implement the loop, the racquet head up take back, a lot of times I get the fake out where it’s the unit turn and then it immediately goes here. So we’ve cut off the whole kind of loop, the most important part that generates the fluidity to the stroke and the tempo. And this is often where it’s unit turn and then straight down. So whether it becomes disjointed here or disjointed here they’re both the same problem.

You’re just robbing yourself of a great fluid motion.

100% right, man, and it’s just one of the biggest killers out there. So if you have it, got to address it.

For sure. Guys, as always, you know Nate and I just want to see you improve your game. This video as you can tell is for a very specific skill level. If you’re a beginner we don’t even want to talk about this loop yet, and if you’re a high level skill, a higher level player, this probably isn’t something you’re really struggling with anymore.

So do us a favor, we want to help your game and we can help just about every skill level, but we need to know more about you. So do us a favor. Click the button of the link below, answer some questions for us about your specific game and join the Play Your Court Tennis community. Inside our community every week Nate and I send you custom video coaching based on the things that you need to work on at your specific skill level.

So press the button, link below, answer some questions, jump in our community. We’d love to have you. Also if you like this video definitely press Like below. If you have anything you want to see, comment, and definitely subscribe to our channel to make sure you never ever miss Nate’s face. We’ll see you guys soon.

Click here to get your custom video coaching: http://bit.ly/31ES4JG