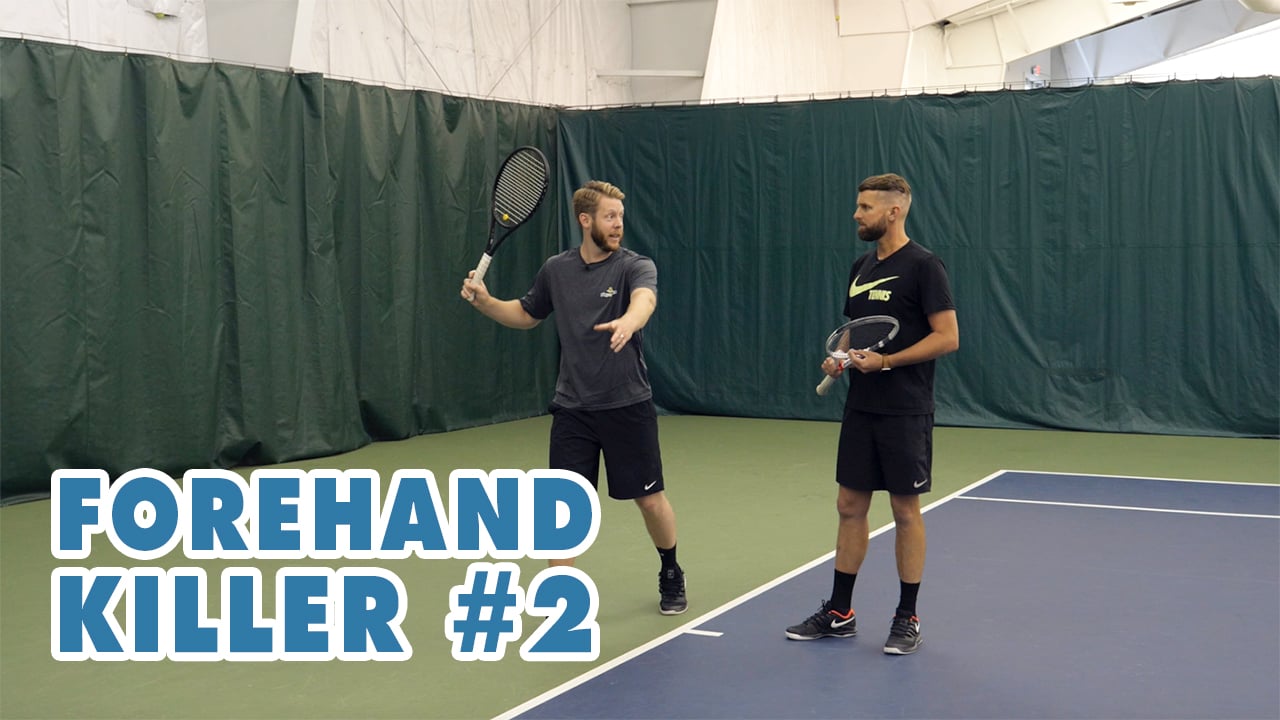 In all seriousness, guys, the PlayYourCourt community is the tiniest investment you can make. If you’re on YouTube watching instruction on how to improve your game, I promise you join this community, you won’t regret it, but if you’re not there already, a PlayYourCourt 50 is the equivalent of about a USTA three point O, the rating system a 50 to 70 about a three point O, to a four point O. So that’s the level of player we’re talking about.

Nate, mistake number two on the forehand, now we talked a lot about number one, maybe give us a quick recap.

So number one, we were talking about the disjointed forehand, whether it’s halfing it at the unit turn where we’re not completing the loop and we’re dropping immediately down, right?

And to see this guys, we’ll throw a link up above. You can certainly click over there and check it out.

And we’re not talking about Federer’s Forehand. It’s not because it’s not the lag, and it’s not the slot. It’s missing a lot of components. The other point of the disjointed forehand that we talked about is getting the racket back and not holding it long enough in order to get into the loop. All right? And this is where we’re getting the rocket, and we’re immediately dropping before you’re ready for the swing and contact, robbing you of a lot of fluidity, and certainly a lot of power.

So what we’re talking about today is actually what we see a lot when people try to correct this, and this becomes more like a softball pitch, where it all becomes one continuous movement.

All right? And here Scott and I, our coaching background with USPTA, PTR, everything’s about progressions, right? So this is in kind of real terms of what we see when we work with students. They fix one problem, creates another. And they kind of create another problem.

So the error that we see here is everything happens in one motion. So from the ready position, there’s not necessarily a hold through the unit turn, and there’s not a hold on the take back. What we’re seeing is just one continuous stroke, right?

It’s just sort of a rushed version of what we wish you were doing, and you’re not separating into the two segments that we really want to see here, the two components of this stroke, which are a take back, a pause at the height if there’s time.

A pause on the take back if there’s time. Sometimes you’re hitting the ball so big back and forth that it is just here and into your swing, but we never want to see here, and droppings, and we never want to see, you know, this one sort of spastic late motion.

And so in this motion you’re losing control now. The racket is moving so fast in so many different phases, it’s really kind of hard to keep the joint position, and therefore it can’t be consistent. So the control goes out the window, all right? So here it’s like maybe you found some power, and you’re just not controlling the ball because everything is too fast. All right? So we’re going to make this short and sweet. We’re going to show you want this looks like in real terms because we’re actually kind of slowing this down.

Get Excited for the Wrong Way

So in really life, what it actually looks like, and identify it if it’s you, all right? We’ll show you exactly how to fix it at the tail end of this video. So the first up is the wrong way, and then we’ll show you the correct way.

Get excited for the wrong way. It’s going to look real spastic. Let’s check it out now. All right, guys, so what you can see here is I’m just turning way too late. The ball bounces on my side of the court, and then I’m frantically trying to make this unit turn and time a fluid swing, and unless you’re an unbelievable athlete, this is just not possible to do consistently. I might every once in awhile time these and hit a great one, but it’s just not something that’s replicatable, and that’s why we really focus on you separating this into two segments, where you get that racket back in your unit turn started before or at the time bounces on your side of the court, giving you a little bit of moment to pause, and drop in to generate a more control and fluid strokes.

So let’s take a look at what that looks like now. So what you’ll see here, my racket comes back much earlier, there’s a slight pause, allowing me to time on a consistent basis this drop, and generate the power and the fluidity that I want out of my forehand.

All right, guys, so as you can see there, when I separate my stroke into two distinct pieces, one with the take back in a unit turn happening before the ball bounces, with a pause at the top, and then launching into the slingshot motion of my stroke, it’s much easier to time, and it generated much more fluid, consistent, and repeatable forehand.

Guys, it’s tough out there. I mean, this game is so much about timing and tempo, with it being a sending and receiving sport, and the technique is important, but we certainly don’t want to undersell just the tempo of this. Right? I mean, the game almost has a pulse. Right? And it’s like one minute you’re taking the racket back too early, the next minute you’re taking the racket back too late. All right?

And this is certainly something that is an actionable tip. This isn’t something that you’re just going to listen to, and immediately head out into your next match and fix. Get out there in the practice court, and find the tempo of the unit turn, and the racket drop, all right, so that you’re not late, and you’re not just doing it in one movement, and really you’re going to find that this timing, some of it is repeatable, is consistent, and fluidity may be my favorite word of the game, man, because when you think of really good players, what is the word we use? Fluid.

That’s right. Guys, remember at PlayYourCourt we just want to see you improve your game. As Nate just mentioned, a lot of the time what you need is somebody to jump out on the court with and practice some of the stuff. You need to put in the reps. That’s actually what our PlayYourCourt community is all about.

What we actually do it pair you with tennis players in your local area, so you can jump out on the court, practice the stuff that you’re learning, whether you’re watching YouTube or taking lessons. You need those extra reps, you need to practice with other players. So click the button in the link below, answer some questions for Nate and I about your specific skills level. We’ll get you inside the PlayYourCourt community, match you with some local players, and Nate and I are going to send you some custom video instruction each week based on the things that you need to work on. So do us a favor, click the button, link below, and jump inside of the community. Also, obviously want to see more of you on YouTube.

Like this video, comment below, and tell Nate and I what you want to see more of, and subscribe to our channel to make sure you never miss any of our videos. We’ll see you guys soon.

Today we show you the second of the three common mistakes a lot of players make on their forehand. This video is for players with a PlayYourCourt rating of 50 to 70.

Click here to get your custom video coaching: http://bit.ly/2J8k8gb