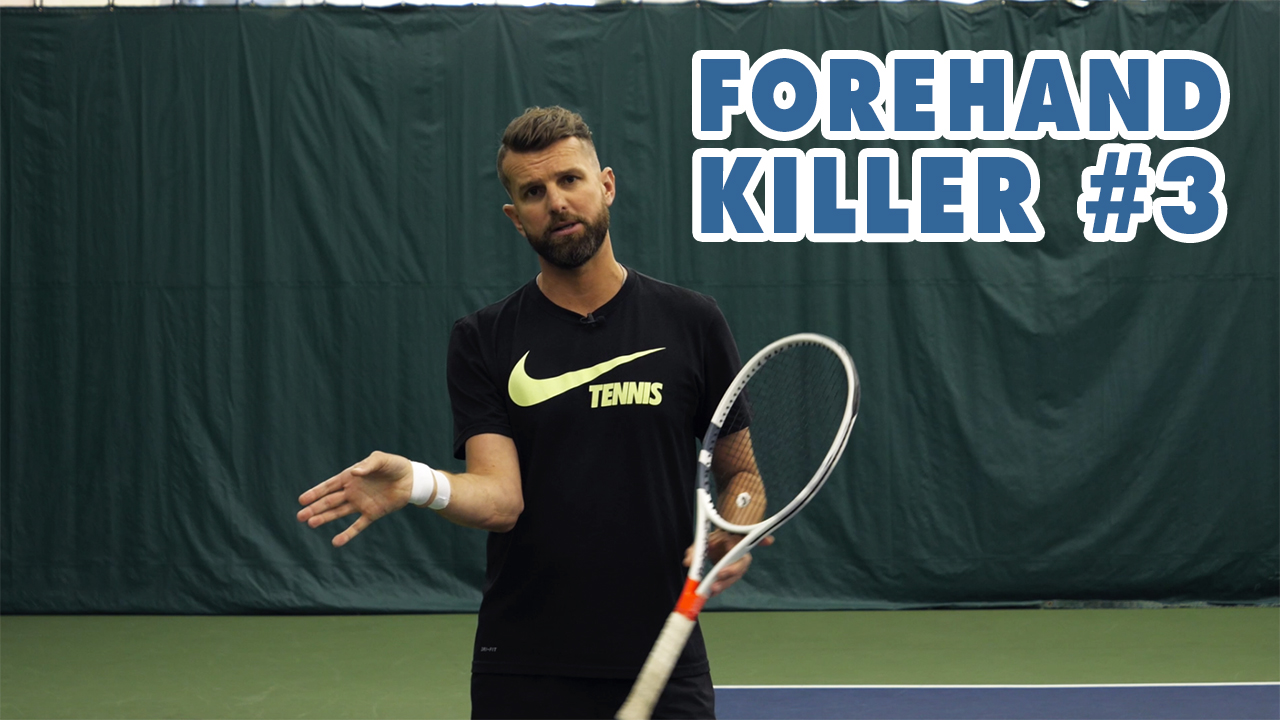 Today we show you mistake number three a lot of players make on their forehand.

Let’s go ahead and get into today’s forehand killer and what we’re talking about it’s a mistake we see with joint position but it’s something that’s a little bit unique to the semi western, it doesn’t mean that it doesn’t happen with the eastern and continental but we do see it more prevalent in the semi western.

All right, so as a coach working with my students I run into this all the time, somebody has made the change to semi western and they’re not getting the joint position quite right. And what we’re seeing is as the racket is being taken back, instead of getting in to pet the dog, all right and whether you agree with pet the dog or not that’s neither here nor there, what we need though is this racket to be able to fall below the wrist as we enter into the slot and the lag.

And what this move is, this mistake robs us of that ability. As I’m taking the racket back the mistake is I allow the racket to fall on it’s edge. Once the racket has fallen on it’s edge my joint position that is absolutely as far as the racket can drop, so now as I’m moving through the stroke it ends up being a pretty flat ball, hard to generate spin all right and in order to manipulate that we start seeing a lot of shoulder dips, and the whole kinetic chain starts breaking down, okay.

So let’s talk about the right way and the right way what we’re going to be focusing on with the traditional forehand really I’m a product of the 90s. So my forehand what we’re seeing is that the racket although back, I’m actually taking it all the way back to get into pet the dog, all right, and that’s fine because I can still accelerate, find the lag and the slot, to catch a ball and find this vertical swing path out in front all right I know today we’re seeing a lot of players where the forehand, because of the speed of the game has now gone to where they’re dropping on the side or even inverting, that’s still the same thing cause we can tell the strings are down, all right. This is really the product that we want to find in order to get the lag into the slot and generate this big spin. All right so forehand killer number three from the uniturn and the racket take back we’re allowing the racket to fall on its edge.

All right so the strings are out to the curtain, and at this point we’re producing a flat ball and we have the inability to let the racket fall and create the lag with the racket getting into the slot. All right so what we’re going to do now is I’m going to show you the wrong way, I’m going to show you this mistake with the racket on its edge, all right. And then we’ll show you the right way, we’ll show you the correction with getting the strings down, creating the slot and the lag. So guy’s what you’re going to be able to see here is my uniturn is pretty good, but with my racket falling on edge it makes it relatively difficult to allow the racket to fall below my wrist. And really crate much of a lag.

Or enter the slot. And guys if you’ve got wrist problems this could be a huge culprit, I’ve got my wrist taped up because I’ve had an issue with the TFC and the ECU all right and that was something completely unrelated to tennis but man this is firing my wrist up. Right, it’s just a lot of pressure having everything, the weight back behind, and the inability to get this racket down, okay, so if you have wrist issues this might be the culprit, if you have an inconsistent forehand, the inability to get, you know more spin, more velocity this could be the culprit, all right. So we’re going to show you now the right way, the, you know the more probably the more advanced way, the more efficient way to get to a fluid more powerful forehand and this will be with the strings down, you know the pat the dog or on the side. Let’s take a look at that now.

All right guys so as you can see there that small correction makes a pretty big difference in his ability to hit a more fluid and more powerful forehand and if you watched video one we talked a lot about the power, or the fluidity that you can gain on your forehand by starting up top and dropping down into kind of like a rollercoaster type motion and you can see in the clip here where Nate did this wrong, you’re kind of robbed of that bottom piece of the stroke, you’re not able to drop the racket down in there.

Yeah guys so, get out there, like we said in the last couple videos with the mistakes that are killing your forehand, this is a sending and receiving sport, it’s about timing, it’s about tempo okay so that is certainly a piece but this is a little bit more technical okay. So if you guys are really having a problem and you’re like, this is me! I’m definitely having this issue. My suggestion would be to start in pet the dog, right, and feel what that feels like, and slowly climb find it up higher until you start finding the piece so that the uniturn basically takes you back into this forehand, all right and again…

Guys we hope you enjoyed this three part series on the three mistakes that are killing your forehand. Here they are in case you missed 1 and 2:

For sure. And we’re just here to help you improve your game, as you guys know this instruction is not for everybody, if you’re a beginner we’re not talking about loops yet, if you’re a division one college tennis player you don’t need this instruction you’re well beyond this. We want to give you the custom video coaching that you need, and we also want to pair you with the players that you need to meet in you’re area where you can go out and practice this stuff, I mean the amount of reps you have to put in for this stuff to click is not small, you need practice partner. So do us a favor, click the button on the link below, answer some questions for us about your specific skill level and join the PlayYourCourt community.

What Nate and I will do, we’ll send you some custom video coaching based on the things that you need to work on, but not only that we’re going to pair you with other players in your area for practice sessions, for matches, for league play, all for about the cost of a can of tennis balls, kind of a no brainer, so definitely click the button or the link below, jump inside our community and also if you liked this video please press like, if you want to see more of us on a regular basis subscribe to our channel to make sure you don’t miss any of the amazing videos that Nate or myself are putting out, and lastly if you have anything you want to see more or less of except for Nates face we can’t control that.

Did you just talk about my face?

Click here to get your custom video coaching: http://bit.ly/2ISMISg