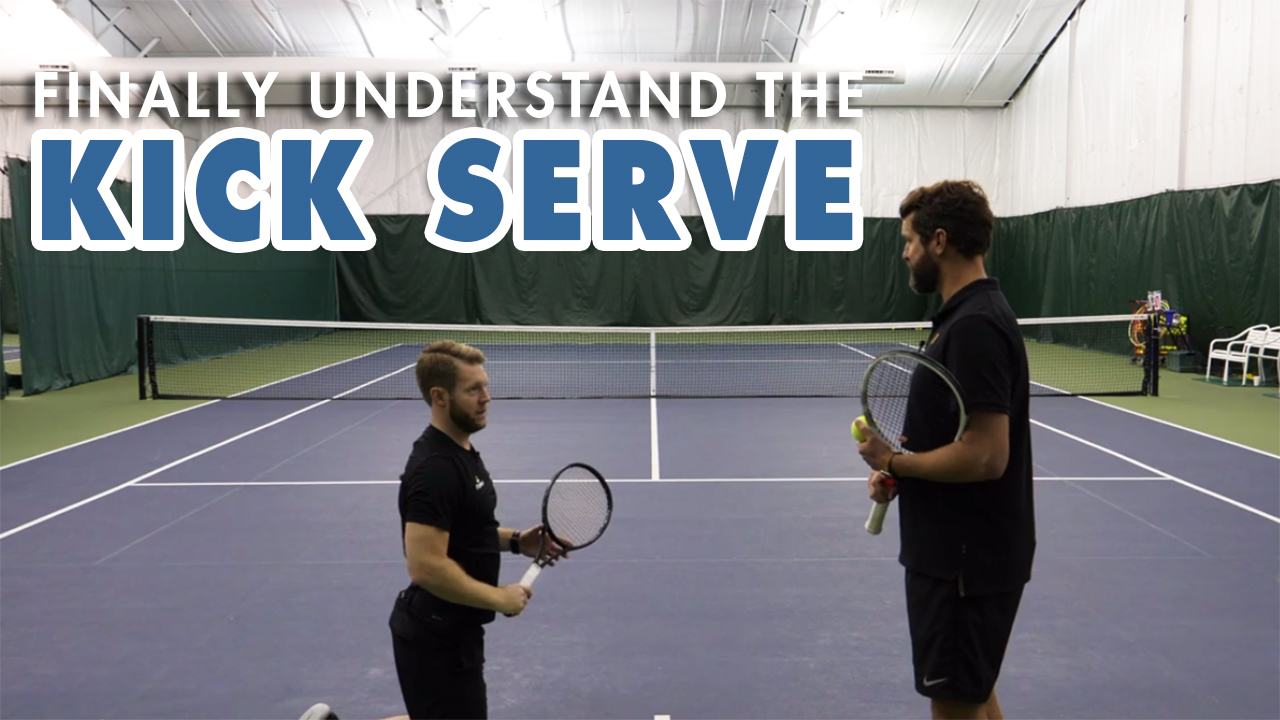 Having trouble with your kick serve? Today we show you a simple drill that will help you finally understand the kick serve. This video is for players with a PlayYourCourt rating of 60 and up.

– [Scott] Hey guys, Scott and Nate from playyourcourt.com, and today we’re gonna show you a simple drill that will finally help you understand how to hit a kick serve. So today we’re talking kick serves. This video is for players with a Player Court rating of 60 and above. If you’re not familiar with our community and our rating system, a PlayYourCourt 60 is the equivalent of a USTA 3.5. So, I wanna tell you guys a little story here. I’ve played tennis at a pretty high level for the large majority of my life. I played the Junior Tour, I played Division 1 college tennis, currently a player on U.S. tennis 5.5 level. And I’ve always struggled with the kick serve. I’m 6’3, I’m a taller guy, I’m supposed to have a really easy time hitting kick serves. And this is just a motion that I never really got comfortable with. And to be honest Nate and I met, and we were discussing and planning some of the videos we wanted to film, and he brought up this stroke on the kick serve, and I tried it and it actually made such a huge impact in my game, that I’m positive it’s gonna make a huge impact in yours. So, I’m gonna step off camera here and just sorta let Nate school you, the same way he did me as a USTA 5.5, it works for me so I’m sure it’s gonna help you guys out.

– [Nate] Alright guys, so. This mistake that Scott was making on his serve, it’s one that a lot of high level players are making. And what’s happening is that they’re tossing parallel with the baseline and putting the ball more of a three o’clock position, going back to what would be a nine o’clock position. And some of you might be thinking, that is what we see on the pro tour, and in fact Andy Murray and a few others do toss parallel with the baseline. A lot of professionals do. The problem is is that these guys have these superhuman rotator cuffs, and they’re playing and practicing serves every day. So even Scott being a high level player, he’s not on the court all the time practicing his serve, and as we get a little bit older we lose a lot of the elasticity in our arm and in our rotator cuff. So this three to nine, tossing parallel with the baseline is gonna be problematic because I’m not gonna be able to rotate and get all the way through the axis of my swing. So the quick fix, really, was just simplifying. And I think it works for most levels. Whether we’re hitting a kick serve or we’re hitting a top-spin serve, and there is a differentiation. A lot of us use the term kick serve, but unless the ball is kicking, I mean really we’re just hitting up. So, I really like hearing terms like up-spin, top-spin, ’cause that’s really what you’re creating. But for Scott specifically we were trying to create more of a kick on his serve. And so the simple change is that we had him just go ahead and serve, tossing the ball more at one o’clock, maybe deviating a little bit towards two, so 1:30. And just tossing and getting the ball back and behind his head, right? And so if he wasn’t to hit this ball it was gonna actually drop and hit him right on top of the head. Not necessarily getting all the way back behind him, again creating a really difficult time getting up to the ball and then rotating out. So what this exercise does of getting the toss more at this one o’clock, slightly two, getting it back to what would be a true six on a clock, it’s gonna allow him to get under the ball, in really accelerating form, and then what you’re gonna see, in the drill that Scott’s gonna show us in a moment, his racket is still gonna stay parallel with the baseline. And sometimes that’s the misconception, is that on the kick serve what we’re trying to do is really get our racket moving parallel to the baseline. But not the toss. So this three to nine actually makes it much more difficult to get parallel to the baseline, and it ends up having us going more into the court, and we lose a lot of force, and we lose a lot of power on this kick serve. Alright, the drill that I really like, that we actually got Scott to do, that helped a lot, it’s one of my favorites. We’re gonna show it to you now. Alright, as you can see we’ve got Scott down on his knees, getting ready to hit a serve. Alright, and what this does is it takes the entire lower body out of the equation on the serve. In order for Scott to now get the ball up over the net, he’s going to have to have a proper toss that we talked about, from that one to two o’clock margin, going back to six o’clock. This is gonna enable him to get under the ball, hitting up with his racket moving parallel, so he gets a proper kick serve. Let’s take a look at these now.

– [Scott] Thank you. So guys, in summary here, the change that really helped me fix my kick serve was just a very small adjustment to my toss. I used to release more out towards three o’clock, now I’m more out towards one, throwing the ball back over my head, back towards the back curtain versus towards the side curtain. If you make this small adjustment in your toss, you’re gonna find it’s a lot easier to swing up on the ball and finally get that ball actually jumping. So guys I hope you enjoyed that video and as we always say, we really just want you to improve your tennis game. The bottom line is we just don’t know a ton about you, this is a more advanced video. If you’re a lower level player, kick serve might not even be the appropriate content. So, do us a favor, click the button below, answer a couple questions so we know what your exact skill level is. We’ll then send you some custom video coaching, based on where you are, and the things that you need to be working on. Just click the button down below, and we’ll take care of the rest.