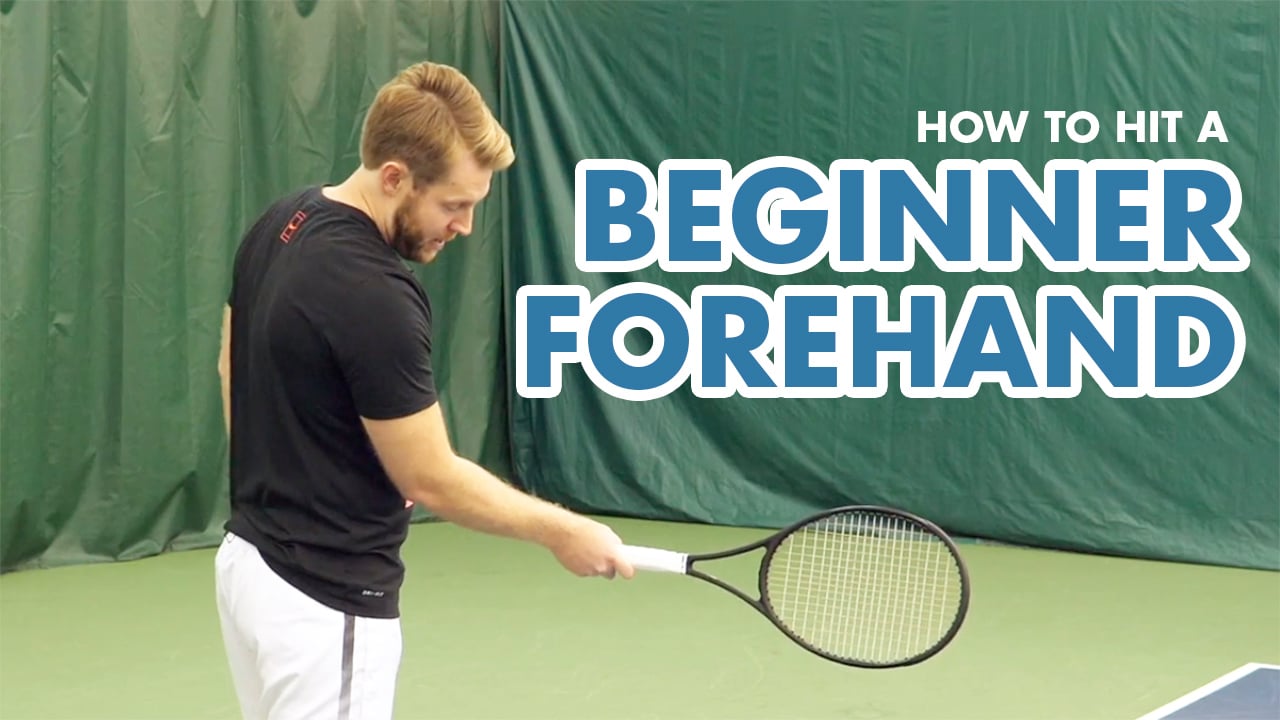 Today we show you how to hit a beginner forehand. This video is for players with a PlayYourCourt rating of 49 and below.

Hey guys, Scott and Nate from PlayYourCourt.com here and today we’re going to show you how to hit a beginner forehand. We’re talking about the beginner tennis player forehand and this video is for players with a PlayYourCourt rating of 49 and below. If you’re not in our community or familiar with our rating system already, this is the equivalent of a beginner level tennis player or a USTA 2.5.

Professional-level tennis players have a much different looking forehand than what we’re going to teach you out of the gate. So you might see a beautiful Roger Federer loop on TV. That’s not what we’re going over today. We’ll definitely work towards that, but today we’re going to go over the beginner forehand.

So if you were taking your first tennis lesson with me and we were getting ready to go over the forehand and the very first thing, would be the grip. So we’re going to go over the beginner grip first. Very simple way to learn this. I want you to take your racquet and put it flat on the ground.  Take the web of your hand, or the V of your hand, and put it flat on top of your racquet and then pick it up. What you’ll see here, that V of my hand is flat on the grip on top, strings are pointing up towards the sky, and I’ve almost got a grip here where I could sort of flip pancakes in a frying pan.

What you wanna be careful of here is tension. We don’t want this tension, it’s going to affect the stroke. So make sure that you don’t have a death-grip here. Someone should be able to literally take the racquet out of your hand. No one’s going to steal your racquet.

So now you’ve got the grip. Just for sake of explanation, this is called a semi-western forehand grip. This is really, if we got you out on the court, this is what we’d want you to learn over the course of maybe a half an hour, hour of instruction with us. If you get out there and this just feels terrible, we’re also going to go over a back up grip later today that might be a little bit easier to digest. So if you get out there and this feels awful when you get started, that’s normal and you’re going to work your way through it. But now that we’ve got our beginner semi-western forehand grip, let’s talk about what to do with it. Let’s talk about the swing path a little bit.

All right, growing up, I had a big dog, and would often happen is that I would be in a conversation, he’d come up and lick my hand ’cause he wanted to be pet, so I would pacify him, I’d reach back and pet the dog. Hence this name for the stroke, right? And what I want you to notice here is that the butt cap is facing forward, the racquet is below my wrist, and it’s on the side of my body. Alright and from here, I would be swinging up to the contact point, which is in front of me. Not entirely, you’re not reaching for the ball here, but slightly in front of you. And it will stay on that same plane until it does a fancy word, pronation. We’ll talk about that in a whole ‘nother video. It’s going to happen on it’s own if your contact is in front, that’s the good news. And then I’m going to get to my follow-through.

So where would I follow through? I watch a lot of tennis on TV and I coach a lot of different players. I see a lot of different follow-throughs, is there a right or wrong way to do this? There’s an infinite amount of follow-throughs, right? They’re always going to change. Maybe you see Nadal way up here or you see Fed way down here. For now, I think the primary focus on your follow-through is to keep even with the shoulder or slightly above the shoulder. But if you’re really having a hard time getting under the ball and lifting, you’re hitting the net, maybe you’re hitting just two feet in front of you, which happens a lot in the very beginning with the semi-western grip. Let’s focus from getting under the ball and finishing high. Really pronounce that follow-through to give it that extra lift.

BACK UP FOREHAND OPTION

I’m going to give you a back-up option. There’s a good chance with the semi-western forehand grip, when you get out on the court for the first time, you’re going to hit a lot of balls in the net.

When I make contact with the ball with the semi-western forehand grip, the natural tendency is to have my strings pointing very, very closed, or pointing down towards the ground. The adjustment we’d like you to make, and this is inevitable, you’re going to get out there, you’re going to start in pet the dog, you’re going to reach up, you’re going to follow through, and you’re going to hit balls in the bottom of the net and say man, Scott and Nate are the worst instructors I’ve ever heard in my life, this grip doesn’t work. And we get it.

So step one I would say, try and adjust that racquet face at contact to get it a little closer to perpendicular. You do want the strings pointing down because the strings are going to grip the ball and generate the topspin that we were talking about. But if you’re just not getting this, let’s say you’ve been trying this for 10, 15 minutes and you just can’t get the handle of it, I wanna give you a grip that you can at least switch to that’s close and a progression towards a semi-western that just makes you more comfortable and will allow you to get the ball back over the net and start having some fun hitting the ball back and forth.

What this grip is called is the eastern forehand grip. So we talked about, in the semi-western, taking the V of your hand and putting it flat on top of your racquet. What I would say, for the eastern, is to just shift your hand, and if you zoom in on my hand here, what you’ll see is my hand is completely behind the racquet now. So semi-western would have been it’s kind of underneath. Eastern, my hand is completely behind the racquet. And this is just going to feel a lot more stable for you beginners. As you make contact with the ball your racquet’s more perpendicular to the ground, your strings aren’t pointing down, it’s going to be a lot easier to drive through, lift up, and follow through. So again, if the semi-western isn’t something that’s clicking for you right away, don’t get discouraged, switch to eastern. And maybe somewhere in between, right? Maybe you’re somewhere in between eastern and semi-western and each time you get on the court, you’re working toward semi-western, that’s fine.

So those are the grip options that we have for you beginners. In closing there’s three things we want you thinking about as you work on your beginner forehand. Number one is what we just finished talking about, the grip. You’ve got the options, right Nate, you’ve got the semi-western and you’ve got the eastern. Again, we hope you work toward semi-western, but if you just can’t get there right out of the gates, eastern is fine. We talk about starting low with pet the dog. And then we talked about following through high at least up to our shoulders for now. We’ll talk about some different follow-throughs, but we wanna see at least over your shoulder.

If you think about these three things you’re going to have a lot of success and start getting some balls over the net, hopefully be having some fun out there on the tennis court. So I hope you enjoyed this video.

PS – Interested in improving your serve? Here’s a video. Oh, and here’s a great one all about how to hit a beginner backhand!

Click here to get your custom video coaching: http://bit.ly/2McXVC2