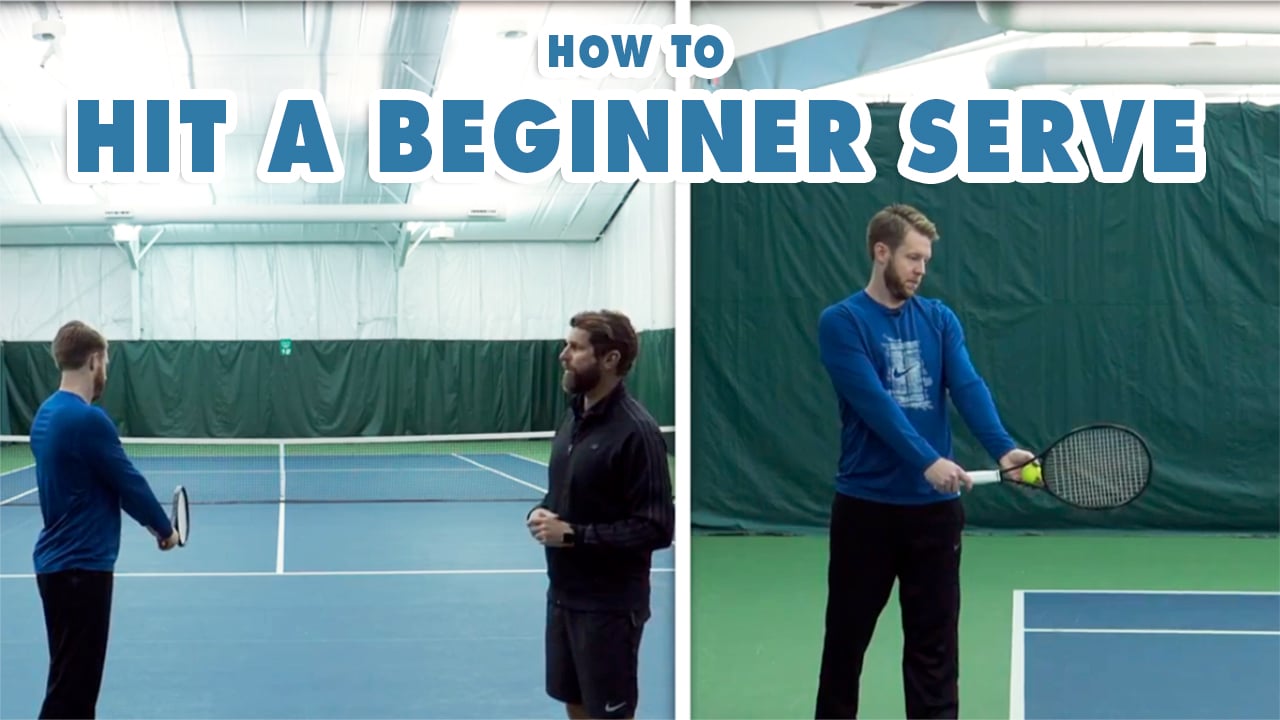 Today we show you how to hit a tennis serve for beginners. This video is for players with a PlayYourCourt rating of 49 and below.

An intro from Scott and Nate

Scott and Nate from playyourcourt.com are here to show you how to hit a beginner’s serve. This is for players with a PlayYourCourt rating of 49 and below or a USTA 2.5 or below (beginner tennis players). This is a beginner serve and learning the beginner’s serve can be a pretty scary thing. It’s one of the most difficult things we’re going to do when we’re first learning the game. And so we’re going to keep this very, very basic.

Setting up the Serve

So now Scott is going to shake hands with the grip, what that means is bevel one is this first bevel and his index knuckle is on bevel two. If it doesn’t feel comfortable in your hand, you probably have the wrong grip here.

In the beginning phase of learning the serve, the most important aspect is really keeping this toss consistent so your racquet has a chance for proper contact. So shoulders and hips are stacked and his racquet is on the side of his body with his tossing hand being his left hand out in front with the racquet. And so this is the most important thing with the toss. Focus from tossing with the shoulder. Often times, what will happen beginners get out and they keep a joint, they put a hinge in their elbow and their wrist, tossing with too much of a joint, too many joints and therefore creating erratic tosses.

So what Scott’s going to do to ensure this is correct, he’s going to toss with his shoulder keeping his arm straight and he’s going to catch the ball at the very, very top. All right and as you can see, the ball came back to his hand so it tells you it’s in a straight line and it’s going to be a pretty good toss leading to a successful serve.

To add on to this, especially if you’re a beginner tennis player when you’re just getting started here, think about starting your arm in a straight line from underneath where you’re going to release. I’m going to actually start my racquet directly underneath where I want my arm to push straight up so I’m not creating any sort of windmill motion. I’m just moving in a linear line directly up.

If Scott can’t essentially balance his hand holding the ball off his thigh, off his left thigh, then he’s not in the correct alignment. Obviously if you’re somewhere else, you’re lined up incorrectly. Practice tossing and catching with the left hand and practice to see what this toss feels like. This seems like it’s going to be really easy. I promise you, this is one of the hardest things with the serve at all levels.

I know there’s a ton more than we could add and trust me, we will. But if you want to get out there and have a proficient serve and build that amazing foundation, this is where you start. And guys, to be clear, Nate and I just want to see you guys improve your tennis game!

What’s next? Get your own custom tennis coaching!