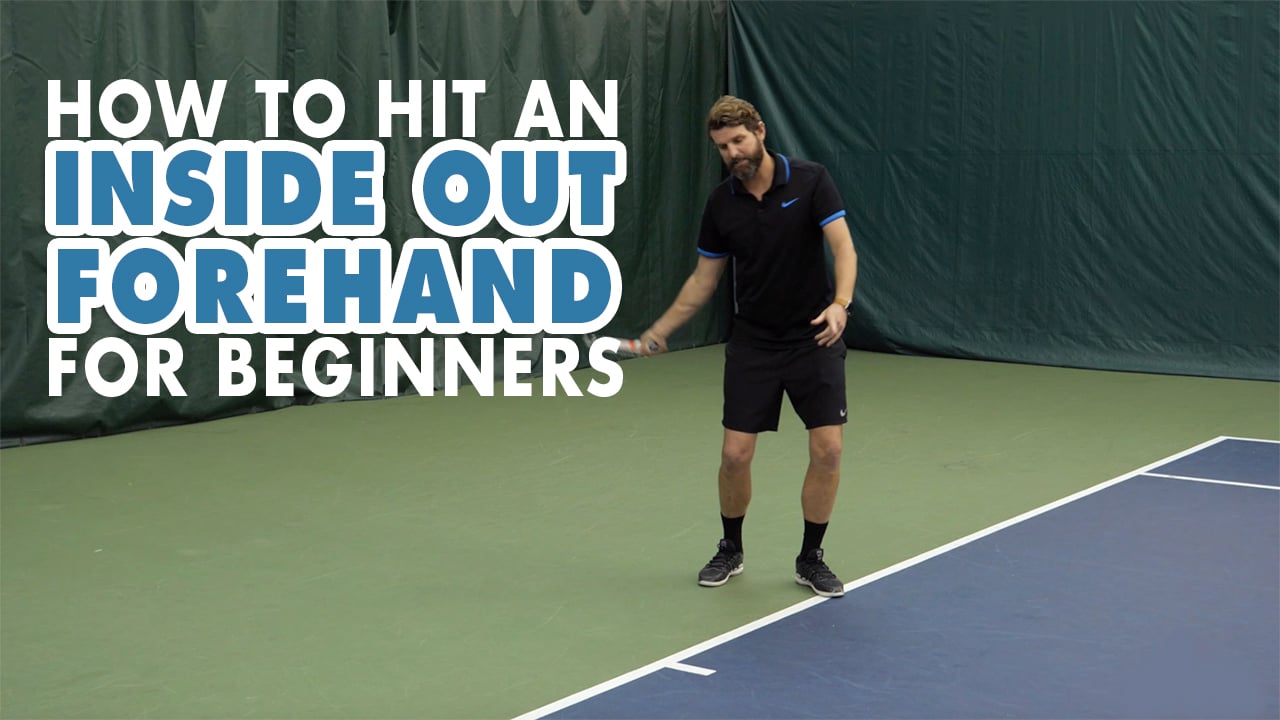 Today we show you how to hit an inside-out forehand. This video is for players with a PlayYourCourt rating of 49 and below.

What is the Inside-Out Forehand?

So, what is the inside-out forehand? We’ve often heard the term inside-in or inside-out forehand, and today we’re going to really get into and talk about what it is. It’s essentially just hitting your forehand from the part of the court that you’d ordinarily hit your backhand from. Most players split the court 50-50. The hash mark in the bottom back of the baseline is the best reference point from this. Typically over to my right, as a right-handed player, I’m hitting forehands, and typically to my left, I’m hitting backhands as a righty. For a lefty, it’d be the opposite.

What we know in tennis is we want to implement a sword versus shield strategy. And what this is, is going into battle, I want my biggest weapon doing most of the work and for most of us, that’s just our forehand. It’s our dominant side and therefore we’re the most comfortable with it. The backhand, being a shield, always good to have a shield going into battle, but it’s not quite the weapon.

And it’s not necessarily the same for everybody. Djokovic would probably say that his back hand is stronger, but he’s still using an inside-out or inside-in forehand most of the time through the middle of the court. All right, so why is this? Why do I want my sword over here other than just hitting my stronger side more frequently? Part of the thing is that we’re able to create much more angle on the ball. The inside-out, moving to my left allows me to hit out, away from me and hitting the ball off the court.

A lot of times we strike the ball, it goes through the court. This allows us to either get big spin or to flatten the ball and really make it go off the court, off the sidelines. The inside-in. Same movement. I’m going to strike the ball and I’m going to hit in, moving across my body, going more down the line, also creating an opportunity to get the ball off the court. All right, so we know with the inside-out and the inside-now, what it is now, but let’s talk about another advantage and it’s the disguise. So, it gets the ball off the court, but it’s also really difficult to tell whether somebody’s going inside-out or if they’re going inside-in. It happens in the blink of an eye and it puts your opponent in a situation where they’re going to have to guess and it’s really nice when they guess wrong because we’re getting free points here.

All right guys, we’ve got Scott to join us, and we’re going to go over a footwork drill that’s going to help you move to your inside-in, inside-out a little bit more efficiently. One of the big problems that we often see with our players is that they’re moon walking.

This moving backwards is an inefficient movement and it doesn’t allow us to get balanced. So, in this particular drill, we’re going to go hand fed so that I can control the drill and make sure that Scott is moving appropriately to this ball. As you guys can see, we’ve got Scott set up next to a cone here, and we’re going to first demonstrate the wrong way to do this. The moon walking Michael Jackson dance move. This is what we don’t want you doing. Here we go.

It’s not a bad forehand, but as you can see, Scott quickly had to make an adjustment step, because moving backwards in that manner didn’t allow him to be balanced and it didn’t allow him the rotation of his hips to create the angle off the court. So now, we’re going to show you the correct way, and this is going to be much more in a circular method. All right. Let’s go back inside out here again, Scott. Here you go. Let’s get another one. All right. So, Scott, really easy getting out away from the ball, and as we’re going to show you, he can easily go inside-in, too. The same exact movement with the feet and all that’s going to happen is with the hips being open, he’s going to make the contact a little bit further out in front and be able to hook it back down the line to the inside-in. I’m going to move out of the way after seeing those forehands. All right, let’s get two more inside-in here, Scott. Let’s go.

All right guys. So in the demo, you saw an effective inside-out and an inside-in forehand, but you also saw a backhand. And that’s okay. Scott hit a big ball, had some pace on it, nice and deep in the court, and at that point, there really wasn’t any other option but using the backhand.

But this is about looking for opportunities. So, the minute that I saw the ball a little bit softer and, you know, maybe four, maybe six feet above the net, I knew that I had time…

A weaker ball, right. Just a weaker ball. But, I was able to get around the ball, and create an opportunity with the inside-in forehand, as you saw. Using this strategy, this sword versus shield, we’re just going to be able to use the weapon more times than using the non-weapon, which is the defensive or neutral ball. The big piece here is it’s going to allow you to create disguise and it’s going to create angle on the ball. And, with those two things, you’re going to get a lot of free points.

Yes. So in summary here guys, split the court up 60-40. Don’t use the center mark to divide forehands and backhands. Get around that backhand. Attack some of these balls in the middle of the court with the inside-out and inside-in forehand, and you’ll find yourself winning a lot more points. And also, guys, at PlayYourCourt, Nate and I, we just want to help you improve your tennis game. This instruction, even on inside-out and inside-in forehands, can definitely change depending on your skill level. So, do us a favor. Click the button or the link below. Answer some questions for us about your specific game and we’ll send you some custom coaching based on your exact skill level. Just click the button or the link below, and we’ll do the rest.

Click here to get your custom video coaching: http://bit.ly/2WwiYo2