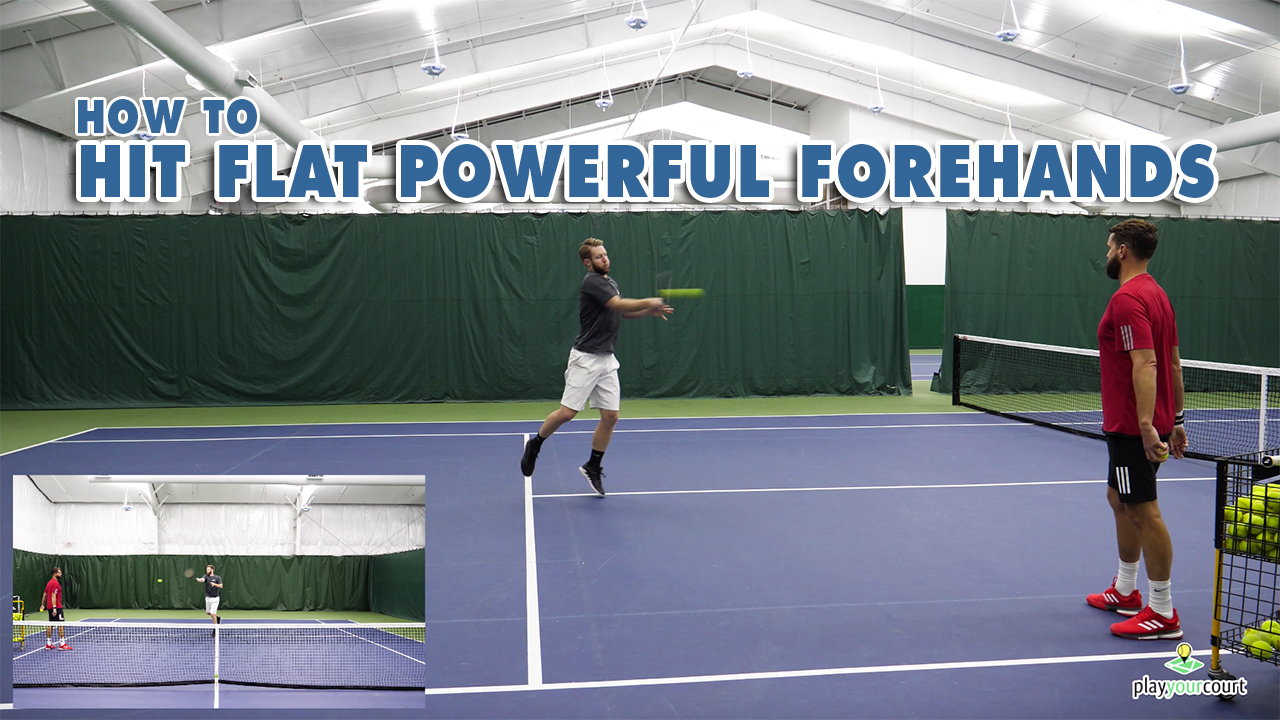 Today we discuss how to hit powerful flat forehands. This video is for PlayYourCourt members with a rating of 60 to 80.

Hey guys, Scott and Nate from PlayYourCourt.com and today we’re going to show you how to hit flat, powerful forehands.

All right guys, today we are talking about how to hit the big, flat, powerful forehand.

This is for PlayYourCourt members with a rating of 60 to 80. If you’re not in the community, definitely check it out. Lots of cool stuff in there.

We’re in an age now where everyone is talking about how heavy to hit the ball, how much spin you can hit the ball, but because we don’t see this flat ball it’s tough. \

There’s not a lot of instruction on it either. A lot of coaches I think even are so bent on the Semi-Western forehand grip and teaching you low to high and getting under the ball and hitting with lots of topspin. This flat, big forehand that you see guys like del Potro, I mean all the good pros can flatten it out. But I think like the del Potro forehand when I think big, flat forehand.

Yep, or Federer’s ability to flatten out, right? Like a lot of Eastern forehands there. So why? Why don’t we see more flat forehands? Like some of you guys are out there playing with them. Great, they’re so wonderful to have. Part of it is the margin for error, right? The ability to bend the ball isn’t as great as the Semi-Western, but let’s focus. Or when I’m saying not as great, doesn’t mean it’s not good. I mean you still hit a really, really good short-angle forehand and can get plenty of spin, but I think it’s important to have a flat forehand because you need to have the ability to finish points.

This is definitely a scenario-based stroke that you’ve got to have in your quiver of weapons here. We’re not saying hit every single ball flat, but there’s absolutely going to be times where you want to flatten that ball out and end the point and that what this video’s all about.

100 percent, guys. So we’re going to immediately jump into demo mode and we’re going to show you really what the difference here of when Scott is trying to flatten a ball out and we’re going to work through several progressions to help you kind of understand when you’re looking to flatten this ball out. Okay, so we’re up here on the service line because this is the zone that we’re absolutely looking to finish. All right, finish the point off, and if we’ve got a speed demon, we’ve got somebody that’s super quick on the other side of the court.

Time to hit it flat.

If you’re putting a lot of spin on this ball, it’s giving them the opportunity to run it down. So and especially on balls that are high. So on this particular drill, really the scenario that we’re looking at is a ball that’s floated and Scott has the ability to get it at its apex. This ball that’s ascending well up over the net and this is the ball that he’s looking to flat out.

Most rec-level players, we really want you to take a ball when you’re this close to the net and the ball is above the height of the net, even if you’re not comfortable hitting big, flat, blistering forehands from the baseline this is one we kind of want you to master. That’s why we’re up here first, right? This is step one for sure.

And some baby steps here. All right, so if we talk about a straight line, like this would be linear striking. So does that happen? Yeah, we see del Po 100 percent, Fed, plenty of guys on tour that have linear striking where they’re going through the ball. Debating whether linear striking is a thing is not something that we’re here for today, but we are talking about a swing path that maybe is on a relatively straight line. So when we start looking at topspin, what ends up happening is that our racket is working below the ball. And so at the tip of this ruler is the ball, this is the approach to the ball. All right, so what we want to clear up here is sometimes the confusion that to hit flat, you have to have your swing path look like this. That’s not entirely true, right?

No, you absolutely can start low, lift up, and level off to create flat balls. You still got to lift the ball up over the net, especially when you’re back on the baseline. Up here maybe not as much, but you still can start low and then level off to generate that flat ball.

What we really want to avoid here, some of you are out there and you’re clotheslining the ball. It’s like a Russian sickle, right? Like your arm is suddenly straight and you’re swinging and you’re going like this trying to flatten it out. You’re still going to have the correct joint position on a flat ball. You’re still going to have your elbow bent, all right? So as we’re working through it, the elbow may float and you may get up above the ball to work through, but I still want this bend in my elbow. So on Scott’s flat ball with this Eastern grip, his approach to the ball may be more subtle. It may be more like this and not see where a lot of times my approach to the ball with excessive topspin is that. His is going to be way more subtle to the ball. But it doesn’t have to be as black and white as linear and then we have the curve.

So we’ll do a little demo here now. It’s just a little something that you can do at home to practice with a buddy in order to start flattening out the ball and then we’ll progress to another drill. All right, guys, so all I’m doing here is I’m going to toss a ball up. Scott’s prepping the racket as the ball is in the air. Looking for the apex and he’s going to look to be more flush at contact. Okay guys, so there you can see the linear strike to this flat ball. So just to clear up, it doesn’t have to necessarily be a high ball that you flatten out. It’s just the first progression. It’s what you’re going to start working.

Doesn’t have to be a high ball that you flatten out, but if it is a high ball you should flatten it out.

Agreed. So this time around, I’m going to leave the ball much, much, much lower, all right. But Scott’s still going to find the apex. The key here is he has to get lower, all right. So he has to find kind of the strike zone by getting lower to flatten this ball out, all right. Still we’re going to work from this service line here as well. All right guys, so as you can see as Scott was hitting the ball from the service line working through that progression, looking to put the ball away in the finishing zone that he is looking to take the ball at the apex regardless of the height. What you can see here now back at the baseline, although there’s more court to hit through, he’s still taking the ball at the apex. And he’s still going through that ball with a fairly linear strike working just under the ball making sure not to impart too much spin.

Important part to understand, too, if you’re looking to blast big, flat forehands from the baseline, you more times than not do have to take the ball on the rise and like Nate said get the ball up at the top, up at the apex. If you let it drop, you just can’t hit lasers from down here. They’re going to go right into the net. So, if you want to hit flat from the baseline, you’ve got to take the ball on the rise. Try and get it above your waist, ideally shoulder height. Just flatten out and drive through that thing.

Important note here too, guys, we mentioned with Scott being an Eastern grip it’s a little easier for him to flatten out. Just because you have a Western or a Semi-Western, doesn’t mean you can’t flatten the ball out. You’re just not going to flatten it out as much.

It’s going to be a little bit of spin on there and that’s okay.

It still drives, still has power, still gets the job done.

Absolutely guys, no matter what grip you have, you definitely can hit a flat or driving forehand. Skill level may play a role in this. As you guys know, we just want to see you improve your tennis game. This video is not for all types of players. It’s for a very specific skill range. We want to give you the instruction that you need based on what you’ve got going on. We want you to join our tennis community. We want to pair you with other players in your local area that are evenly skilled so you can get out on the court and practice all this stuff. So do us a favor, click the button below. Join our community. That’s where we give you all of these things.

Click here to get your custom video coaching: http://bit.ly/34xJvRB