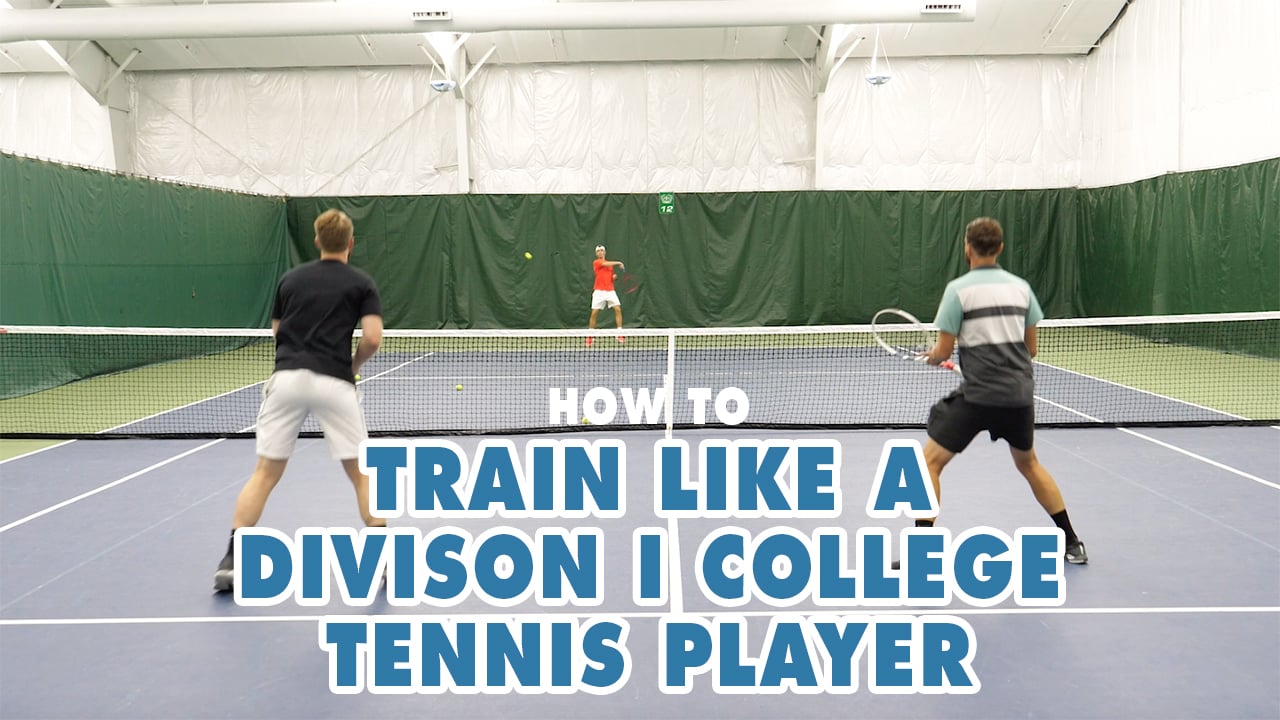 Today we show you collegiate tennis drills that you can utilize with three people on the court. This video is for players with a PlayYourCourt rating of 70 & up.

Today we’ve got our good buddy Andrew here and we’re going to show you how to train like a Division 1 college tennis player. We’re going to give you some two-on-one drills. Before we dive in, this video is for players with the PlayYourCourt rating of 70 and up. If you’re not in our community or familiar with that rating system, definitely click the link or the button below and check out what we’ve got going on. It could help your tennis game tremendously, but if you’re not already in the community, a PlayYourCourt 70 is the equivalent of about a USTA 4.0. So, if you’re not USTA 4.0 and up, turn this video off it’s not for you.

The two vs One Technique

Yeah guys, so what we’re talking today about are these two-on-ones, and we have it happen sometimes by accident. You have a doubles match and somebody doesn’t show up. Or maybe you just have three people that want to go play some tennis and you’re trying to figure out what to do. Well, we actually use the two versus one technique quite a bit through our academy and through collegiate play. Andrew over here I’ve worked with, I’ve had the pleasure of working with since he was a little guy, could barely get the ball over the net. Now the ball goes over the net really, really fast.

All right so, but what we do is, through the academies, we all often went through this and we’d have these discussions of why, and so, I think in Scott and I, both of our experience in collegiate play, we had to utilize this for multiple reasons. One, the access of courts, not super limited, but it’s a whole lot easier when we put three people on the court, but the ability to really make the game more difficult when one person is playing two people. Taking time away, shrinking the court. So, kind of the idea here is that if you can get good at playing two people, imagine what happens when you’re only playing one person. All right, so we’re going to be taking,

Or, if you’re super out of shape, like me and you have a really hard time playing against one person, imagine how great a shape you can get in if you train against two.

We’re going to jump into these drills. The first drill that we’re going to be doing is base line to net. So, Scott and I are going to be up at the net. We’re going to focus on volleying deep, keeping the ball predominately to Andrew. We’ll move around a little bit, but the emphasis really here is Andrew’s going to be working on that quick unit turn getting the racket back, getting a quick split step and tracking and staying behind the ball.

All right, so from there we’ll drop back to the base line and it’ll be a whole lot easier because it’ll have more time, all right. So, let’s take a look at that drill now.

So, guys in this first segment what we’re going to focus on is keeping the ball deep back to Andrew, allowing him to work on the reaction time, unit turn, getting the racket back. Sorry, Andrew, pulling you a little wide there. And focusing on the split step. So you can imagine if this was actually a singles play, how much he’d be working and how fast, how big the pace would be that he would be having to contend with. So, as he gets loose we’re going to start playing away from him a little bit, and make it a little bit more difficult.

So now we’re going to go back to the base line and at this point he’s going to have a whole lot more time. He’s just not going to take more time, ’cause as humans that’s what we do, right?

All right, so we’ll take a look at that now. All right guys, so this one, Andrew is going to be focused on going crosscourt while Scott and I are only allowed to go down the line, and just going to have to get a lot of movement, possibly cutting off the corners, and defending coast to coast.

So, you can merely see how this simulates. Just feel like playing a doll, somebody is just covering a ton of court.

You can immediately see why we put the young, fit guy on the other side of the net. Looks awful over there, buddy. Who’s going to miss? Don’t be that guy. Don’t be that guy. That was in. That was a wide. Definitely a wide. So guys, you can see there Andrew’s getting a phenomenal workout, defining a ton of court and really working on control here. We’re not trying to hit on the line, we’re actually trying to keep the margins fairly safe. Occasionally we make a miss, we just keep playing, right? So, on this next drill Andrew’s going to be going down the line only. We’re going to be doing crosscourt.

This is going to be much worse for him.

Yeah, because, I mean, we’re getting the longer part of the court, right? The lowest part of the net, but same idea here. We are going to crosscourt, he’s going down the line. Let’s jump into it. All right Andrew, play with some height, keeping it away from that line ’cause we’re going crosscourt.

Shaking a lot of this. Shake you very much Nate. Guys, you can see we’re being pretty nice, lot of movement on that side of the net. If you want to work a nice cardio workout, all the while improving your footwork and timing this is your drill. Sorry Andrew.

All right guys, so those two drills Andrew is 100% ready to roll from the base line. We had him taking his time away with the volley’s and then we’ve got him moving, working through the cross course in the down down the lines. Really difficult drill, this is higher level. Here’s the thing though, but you can scale it so, maybe you aren’t playing at an open level, you’re not collegiate or whatever it might be. Just slow the pace down, right? Give everybody time to recover and still practice these.

We’ve got to point out here too. This isn’t necessarily good decision making in this drill; like, if we’re pulling Andrew out wide on every single ball it’s not correct, strategy wise, to go down the line when you’re out of positions. So, take this for what it’s worth. This is a footwork drill. This is a drill to get you your reaction time up from the base line. These decisions aren’t necessarily something at scale into matchplay, the footwork and the intensity is what we’re looking for.

Yeah, that’s a good point to make there, Scott. So, now that he’s all warmed up we’re going to get him in attack mode. This time we’re going to be feeding him an approach shot. So, as he’s moving in, with Scott and I both being on the court, there’s really nowhere to hide. He’s going to have a difficult ball coming back where he’s going to have to play a volley and work the point. So, we’ll jump into that now. So, this first drill Andrew has been instructed to work at about 70% and we’re going to play that first ball back to him. So, we’re kind of working apart, we’re kind of feeling this out here. We’re going to work through four hands back hands. After a few, we’ll get little bit more aggressive.

All right guys, so a couple different variations of that drill, as you can see here. The first version we’re not going to be quite as competitive. It makes no sense for you to get out there with your buddies if them to hit an approach shot and you to just rip a winner down the line. That doesn’t help them, it doesn’t really help you. So, you just need to start more cooperative and then at the end we’ll have some fun, then we’re going to let Andrew go a lot more aggressive on his approach shot. We’re going to go full throttle and try to pass him and get that more competitive vibe at the end there.

I think the big part there too is like, allowing the timing and the tempo, right? we call singles the shrink the targeting, right? To make it a little bit more difficult for him. If it’s in the ally, play it man. Get as many reps here as you possibly can and work on that targeting.

We’re going to start here at a 50% tempo and just going to loosen up that shoulder. We won’t make the lobs too difficult. Once that shoulder gets loose, we get a little bit more competitive.

All right guys, so we had a ton of fun today. Pleasure for having Andrew out here, been working with this young man for a long time and it’s fun watching his game develop. We’ve done a lot of these drills collegiality. He’s working through these quite a bit, as well. Next time you have three people, whether plan to it or not, get out there and run through some of these. Then when you get out in there and you play singles you’re going to be amazed at how effective your shots are because there’s not two people on the court defending it. So, these two versus one drills with a collegiate player. Good times today, Scotty.

For sure. Yeah guys, as always, we just want to see you improve your tennis game. The bottom line is we’ve got a college tennis player here that we’re working with,. This instruction isn’t for everybody. So, we would love to know a little bit more about you, so we can send you the specific instruction that you need, and not only that, but pair you with evenly matched players at your skill level so you can jump in on the court and practice this stuff. So, do us a favor, click the button in the link below, check out our community. It’s everything you need to improve your tennis game. Hopefully we see you on the inside.

Click here to get your custom video coaching: http://bit.ly/2pbJmUe