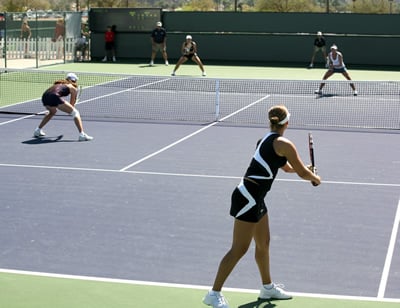 How many times have you thought you could sneak a winner down-the-line on the return of serve in a doubles match? Probably about a million times. And how many times have you hit a clean passing shot winner down-the-line? Probably just a tiny fraction of those attempts. What I am getting at here is that returning the ball down-the-line is almost always a lose-lose scenario. Whether the ball is served to your forehand, backhand, or at your body, on the return of serve, unless you are playing against a real paddy-caker, the serve comes at you harder than any shot you will face in a doubles match, giving you very little time to properly set up and execute a shot down-the-line. When returning, not only is it natural to hit the ball cross court as you are not redirecting the ball, but you are also giving yourself a chance to get in the point. If you try to go down-the-line with the return, there are two likely results… you will either hit the ball late and make an error, or hit the ball directly at the net player, giving him or her an easy opportunity to either end the point or put you on your heels. It is called “holding serve” for a reason, you are supposed to do it! So, when you are already at a disadvantage, why would you go for the even lower percentage shot on the return? By hitting the ball cross court, you give yourself a chance to get in the rally, and greatly decrease the number of free points that you will give your opponents. Oh, and did we mention that hitting the ball cross-court also means you are hitting the ball over the lowest part of the net, with the highest margin of error?

The thinking here is along the same lines as always returning the ball cross court. Your job at the baseline is to keep you and your partner in the point, and to set your partner up for an easy ball at net. Chances are, if you are hitting the ball at the net player, you are doing the opposite of that. You know that most doubles points are either won or lost at the net, and if you are giving your opponent at the net chances to put away a volley winner, you are not helping your team to stay in the point. Your goal at the baseline should be to hit every ball cross-court, and deep, preferably all behind the service line. This will give your partner more chances to make an aggressive doubles move and pick off your opponents replies at the net. Every shot you hit deep cross-court gives your partner one more chance to win the point, and your opponent one more chance to lose it. Rather than hitting the ball at the net player, by keeping the ball deep cross-court, you will also give them more chances to hit a short reply back, giving you an opportunity to come to net, and taking away their advantage as the serving team.

Notice a theme here? There is almost no situation where you should be hitting the ball down-the-line in doubles. If you are the net player and you get a volley, you should be hitting that ball cross-court, and preferably with a nice angle. As the net player, you want to be hitting balls off the court with angles. Sounds simple, right? You want to hit the ball where your opponents are not. If you are trying to hit the ball with an angle off the court down-the-line, not only will you be hitting the ball at the opposing net player, but you will have no angle, and no margin for error as it is the highest part of the net. That’s what we call a lose-lose-lose situation.

I know this all sounds simple enough, but it truly works. By hitting every ball cross-court, you will make less errors, set your partner up to win more points at net, and also give your opponents more chances to make errors. I know that sounds good to you. Also, by hitting every ball cross court, you will find yourself ahead in more games, and more matches, meaning if you want to go for a highlight reel shot down-the-line every once in a while, you can do so with much lower consequences. Try it out next time you hit the court for a doubles match, and let us know how it goes in the comments section!