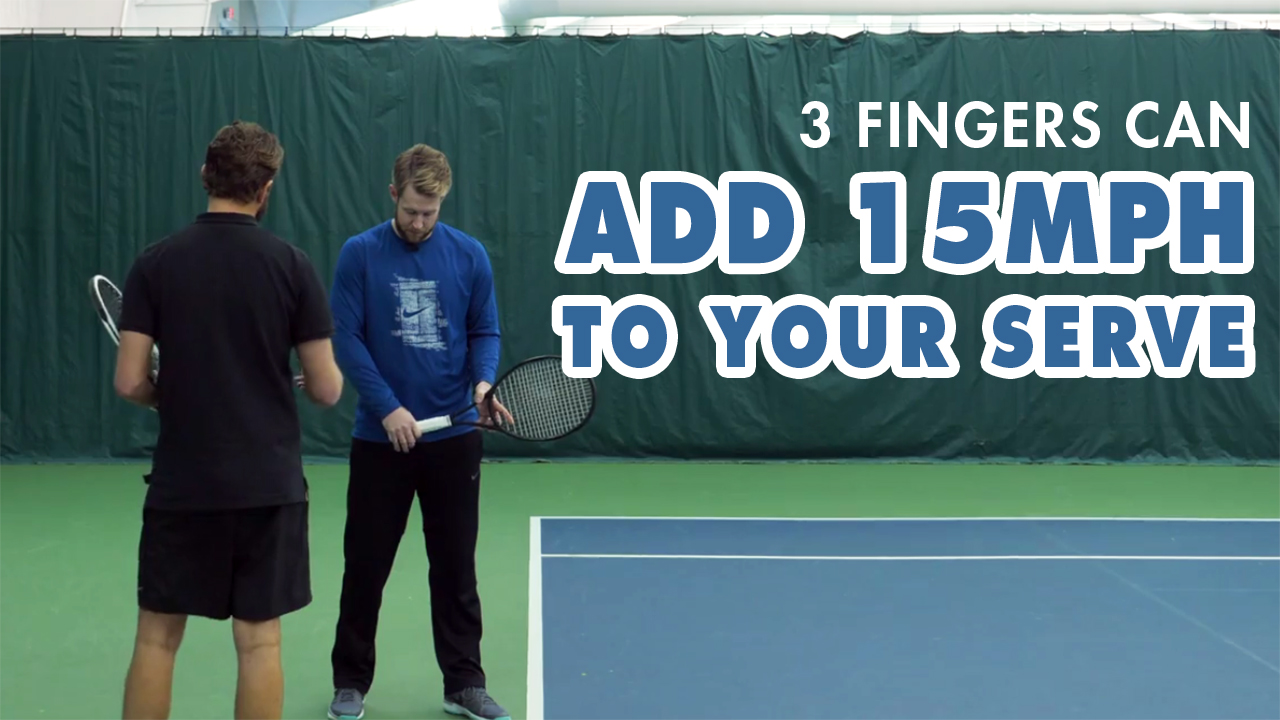 Ever wondered how to instantly increase your serve speed? Well in today’s video we show you a simple drill that will add instant power to your serve. This video is for players with a PlayYourCourt rating of 50 and up.

Click here to become a PlayYourCourt Member and get your custom video coaching: www.playyourcourt.com/tennis-community/

– [Nate] Is that an Australian accent?

– [Scott] Alright guys, so today we’re gonna talk about how just three fingers can add massive power on your serve. To be clear, this video is for players of the PlayYourCourt rating of 50 and up. If you’re not in our community or don’t have a PlayYourCourt rating, it’s the equivalent of USG 3.0 and to be honest if you are playing at a high level, there’s a chance you’re already doing this. But we’ve definitely seen some high level players making this mistake. So Nate, talk to us a little bit here. How are we gonna add more power on our serve with just using three fingers.

– [Nate]A lot of times what’s happening when we’re losing power on the serves is simply we’re just holding the racquet way too tight alright and really what it should feel like is, if we were drinking our coffee or drinking tea and the handle of those mugs are always very

– [Nate]I think thankfully learning to do a British accent today, we’re gonna actually talk about the serve alright but you’ll notice like the handles in those mugs are often very very small so you can only fit a couple fingers and so if we take that method of drinking coffee or tea and apply it to how we hold our racquet, you’re gonna find the racquet, the dexterity of the racquet is much better. The racquet is going to move through. It’s different spots, a whole lot more fluid alright and so what we’re gonna do is we’re gonna have Scott demonstrate this and we’re gonna show you a couple problems that you may be running into and then we’re gonna show you exactly how this three finger method actually corrects these problems alright. And so the first thing that we’re gonna do is Scott line up at the baseline alright and we’re gonna show the wrong way first. Scott’s whole hand is gonna be on here. He’s gonna get, he’s gonna have a death grip right. No one’s gonna steal the racquet.

– [Scott] You can’t see with my long sleeve shirt but if you’re doing it wrong, your forearms flexing and someone couldn’t just grab the racquet out of your hand.

– [Nate]Correct, so Scott’s gonna go through his swing alright. Go ahead Scott, let’s see this.

– [Nate] The wrong way and so what happens is when he gets here he’s holding the ball to, holding the racquet rather too tight. This is gonna enter something that we call Waiter’s tray.

– [Scott] Why is it called Waiter stray, Nate?

– [Nate] Waiter stray because if he was serving us some drinks right? This is a phenomenal position. This is actually the position.

– [Scott] Sometimes, I get in the waiter’s stray position on Friday and Saturday night but not when I’m hitting the serve.

– [Nate] Oh I hope not, hope not. Alright so the way to correct this, this problem with tension is by simply taking these bottom two fingers off and what you’re gonna find here is. Scott, go ahead and run through that trophy position again . We’re gonna take the racquet up with those two fingers is what you’re gonna find is that when he enters in through the trophy stance the weight of the racquet automatically pulls down his back alright and we know that power comes from extension. The more he can get through here, the more power he’s gonna be able to have on his serve by creating this catapult up to the serve. Alright, so let’s see a couples of Scott. three fingers on the racquet, two fingers off, it’s gonna be really, really pliable. 20 miles per hour.

– [Scott] It’s about your first serve speed right. I don’t want to put you to shame.

– [Nate] Let’s get one more. Yeah so you can see suddenly as he gets used to this method the serve is picking up speed and he’s able to get through these positions easy because the racquet edge is gonna fold down his back and then this massive catapult up to the ball, creating a lot of power. So, next time you’re on the court, try removing the bottom two fingers from your grip and just serving with these three fingers and what you’re going to find is the racquet is a lot more pliable and is gonna get through all the major points of the stroke to give you better contact with maximum power.

– [Scott] Hey guys, in another video, we actually talked about how to prevent your nerves. The first thing that happens when you’re nervous, you’re going to squeeze the racquet really tight too, so if you’re actually finding you’re out on the court and you’re nervous and missing a lot of serves, this three finger trick can actually help you relieve those nerves loosen up your hands and start getting through that fluid service motion as well.

– [Nate] Yeah, we’ve actually seen with another pro tour with the most dominant player in the world right now, with Novak right. So Djokovic if you remember, if we rewind, eight, nine years ago, he was having a lot of service issues and part of it was controlling the nerves and the tension in his hand. For you guys, that are watching a lot of professional tennis, watch Novak, the next time he plays. You will see his wrist drop into this passive position.

– [Nate] Super relaxed and so when he’s going through this motion, the racquet is really leading the way. It’s the same exact idea of the three fingers technique.

– [Scott] Alright guys, so in summary, to get more power on your serve, think about relaxing your hands and again a good drill to really get a feel of what this is like, remove your bottom two fingers, hit a couple serves, so you can feel that racquet drop in that power position. Get that full hand back on the racquet with that relaxed grip and I think you’ll find that you’re adding massive power to your serve. Also guys, remember that Nate and I just want to help you improve your tennis game but we don’t know a ton about you. This is not the same advice we would necessarily give all skill levels, so click the button below, answer some questions for us about your skill level, so we can send you some custom video coaching based on what you need to work on. Just click the button below and we’ll do the rest.