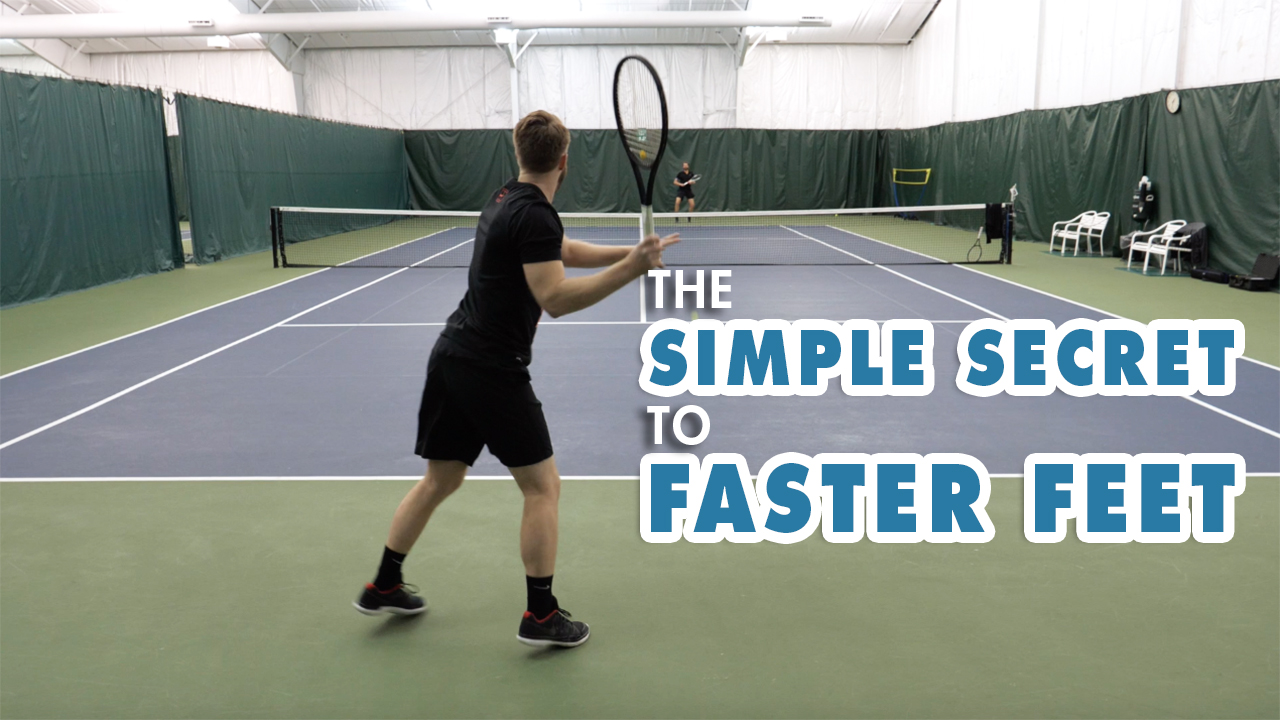 Want to be quicker on the court? Today we show you a simple adjustment that will improve your footwork instantly. This video is for players with a PlayYourCourt rating of 79 and below.

– [Scott] Hey guys, Scott and Nate from PlayYourCourt.com and today we’re gonna teach you this simple secret to faster feet, the split step. Alright guys, so today we’re talking about the split step. To be clear, this video is for players of the PlayYourCourt rating of 79 and below. If you’re not in our community or familiar with our rating system, a PlayYourCourt 79 is the equivalent of a USTA 4.0. So Nate, Split step, tell me what’s going on here man. What is a Split step?

– [Nate] Alright so the split step is the loading of energy. It’s a lot like a spring, right? And what this is going to enable me to do is to change direction relatively fast, right.

– [Scott] Keep you light on your feet. That simple secret to faster feet.

– [Nate] To faster feet, 100% right and we see this in all sports. In basketball and soccer, and what it is it’s really getting on the balls of the feet, much toward the toes, but absolutely not the heels. That’s the biggest mistake. We see a lot of people trying to get this split step and it’s really a stop step because they’re landing on their heels and that doesn’t produce the spring-like effect.

– [Scott] That make sense right. Like stop step, an object at rest tends to stay at rest.

– [Scott] So if I come to a screeching halt that’s where I’m going to stay I would guess right.

– [Scott] So what the, when does this happen? When do we actually split step?

– [Nate] So in tennis, every time somebody is ready to make contact with the ball, your opponent, we’re going to get a split step. And that way, once we’ve anticipated the direction of the ball, we can quickly move in that direction to intercept the path of the ball.

– [Scott] So Nathan, the myth here is at contact, right? Like I hear a lot of coaches coaching their players, split step at contact. So what’s the confusion there? I see a lot of players make mistakes based on this coaching. It’s not always specific enough.

– [Nate] Yeah, we hear it a lot, don’t we? But the problem is that if we’re actually splitting at contact we’re going to be late. The ball coming off the racket entirely too fast, especially at higher levels and you’re still coming down from the air to land and then making that move.

– [Nate] Yeah, that’s a bit much. It takes too long to get down. What I tell my students is that they’re going to go wide, right? So what I want is I want my knees and my hips centered under my shoulders and this split step should go a little bit wider to keep me centered and balanced and then the toes working like a spring is what’s going to enable me to change direction.

– [Scott] Perfect and guys that’s huge. I think the mistake we see, even a lot of coaches just not correcting, is your feet should land that stable split step that Nate just showed you that makes you so quick off your toes. That’s gotta happen when your opponent makes contact. We see some, I’m not gonna call it bad coaching, ’cause I don’t want to point the finger, but some confusing coaching, where we’re seeing players actually jump up as their opponent makes contact so they’re landing late and they don’t have time to adjust.

– [Nate] And especially on the serve. The serve, the biggest part of it, if the serve is coming at excess of 100 miles per hour, you have zero chance if you mistime the split step. So we’ve got to do it before contact.

– [Scott] That’s right, got to be light on your feet so the second your toes hit the ground you’re watching that ball come across the net and making a quick adjustment to move. So enough talking, let’s show these guys what a correct split step looks like, yeah?

– [Scott] So what you’re going to see here, as Nate makes contact that’s when my feet are landing on the ground. I’m not gonna jump too late. I’m gonna jump right before he makes contact so I can quickly adjust and move to the ball.

– [Nate] Alright guys, so, in summary, the three most important keys to what we went over today is the split step, we’re going to be in a loaded athletic position, alright. And then two, we’re going to have a spring from the ground up and this is because we’re on our toes that allows the calf to engage and we can move quickly to wherever the ball is going. And third, and probably the most important, is not doing the split step at contact but making sure your feet have landed as your opponent is making contact. We want to make sure we debunked that and I think by following these three major keys, you’re going to be moving a lot better to the ball and tracking down a lot more balls in the near future.

– [Scott] Absolutely and guys, while the split step is a little bit of a universal teaching method, this is something we would tell all players most instruction isn’t in what Nate and I want nothing more that to just help your game. But we don’t know a ton about you so do us a favor, click the button or the link below, answer a couple questions for us about your specific skill level. and we’re then going to send you some custom video coaching based on your skill level, so you’re working on the things that apply to your game. Just click the button or the link and we’ll do the rest.