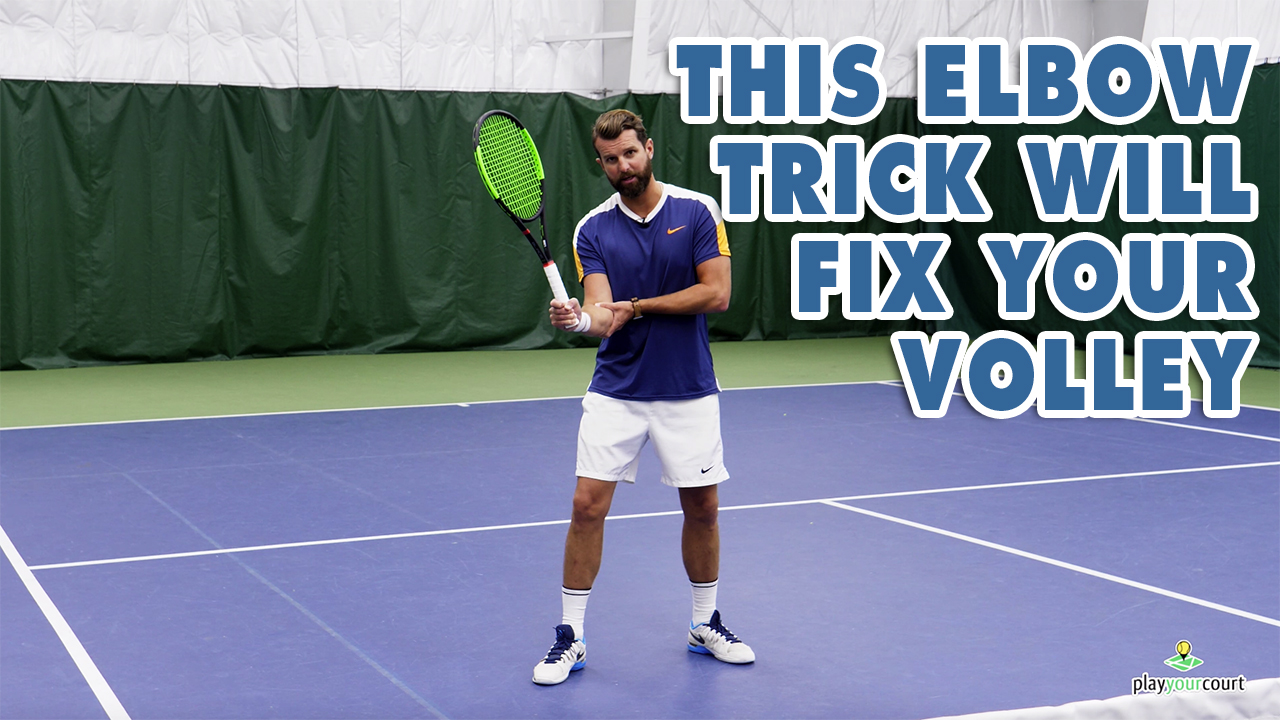 Today we discuss how to improve the joint position of your volley. This video is for players with a PlayYourCour rating of 60 and below.

One of the issues that we run into with the volley is that we don’t get a grasp of what necessarily, the joint position should be. What we’re referring to with this joint position is that, when we’re in a proper stance for the volley, we should be seeing an L. Almost 90 degrees from the elbow to the hand, up to the racket, right? And this is really important and, we’re find is this position stays true on the backhand, and on the forehand.

So, that beginning the back hand volley is really difficult because we struggle the grip, in trying to get the feel on that non-dominant side. But in time, especially for you advanced players, your backhand, although it may not be as potent, it may not have as pop, it’s also the most consistent. Because, it’s really hard to mess up.

All right, we’re going to talk about that again in just a moment, but let’s put some attention here on the forehand. The problem with the joint position on the forehand, is because our arm has the ability to completely rotate around in this full 360. Is that we have the ability to allow our arm to go back too far, we can straighten it out, we can drop the racket. There’s just so many different variances of where the racket can travel. For a proper volley, what we’re really trying to find is this elbow in front of the hip and the racket out in front.

Where the movement, that contact happens in front. So although the contact is supposed to be out in front, it can get lost because the volley’s a complicated mechanism. We got to move up to the ball, we have to track the ball, the volley’s to come with the legs. We’ve got to get the feet set, right? There’s so many other things are happening.

So, the joint position can get lost. And so, a lot of you struggle with swinging on you’re volleys. Or dropping the racket and just this poor joint positions. So, what I’m going to show you is a little trick to really practice and find it. So, what we want to do here is, from this ready position, I’m going to take my non-dominant arm and I’m going to reach in and find my elbow. And so what you’ll notice I’m doing two moves at once.

I’m pivoting on my toe so that my elbow lines up with my hip and my arm is in the direction of my knee. And this is the joint position that I really want to be in on the forehand volley. So, one more time. From my ready position, I grab my elbow and I pivot out. And now you can see that everything is on this line. And so what I’m going to do is, I’m going to practice volleys by using this position and just allowing the racket to work forward. And from there, I make that solid contact out in front. By holding my elbow, I’m not going to have the ability to swing, because I can’t go but so far from here.

So, on a transition volley, even this would be fine. This would be okay here, right? But as soon as I lift my arm, took my non-dominant arm off, my arm could wander. So we’re going to get Scott out here, he’s going to feed me a few balls. And I’m going to show you how to practice this and what it should look like. And then I’ll take the arm off and show you that volley with contact out in front with the correct joint position. All right guys, by controlling my dominant arm with my non-dominant arm you can see here that I’m able to control the edge of the racket and really lead with that edge, without over swinging.

Okay guys, so now that I’ve learned to control that dominant side and really work through that joint position in the appropriate space by using my non-dominant arm to set perimeters and control it. Now it’s time to start working towards the volley. And so what I’ll do here is I’ll still keep this left hand nearby almost as if I’m handcuffed. And that’ll help me just, kind of, mentally not allow my arm to wander. If I feel like I’m breaking the chains, I know that I’m starting to swing. And there’s a little bit of a swing on a transition volley, but it’s not going to be that far behind you. That’s a whole nother video. So here, I’ll go ahead and demo and I’ll show you what it should look like without holding the arm, but using that left hand kind of as a guide.

All right guys, so going back to the back hand, as we promised we would, the joint position on the back hand is guaranteed, because the beauty here is that you enter this L and the perimeters are already set. It’s really hard to go any further because you’re locked out through the shoulder.

So, a little tip with the back hand is just make sure that you’re keeping your elbow up to really help through this volley, so as Scott feeds me a few volleys here, what you’re going to see is that this joint position really locks out. I just need to limit how much it’s moving on the front end of it. So guys, you can see with the racket working out front, I’m already in this position of this 90 degrees that makes the back hand volley relatively easy. So, even if I want to swing right, it’s just feels so goofy, because it’s locked me out, my parameter’s already set because of the shoulder not going with me there. So guys, work on this volley. Get out there on the forehand volley and work on holding the elbow and work through the stroke. And then, let it go and work on kind of in handcuffs, the whole Pat Rafter.

You know, that dude got down there and literally looking at the ball through contact, the hands were always pretty tight together. And then from there you’ll find that that’s automatically going to be set, that joint position is already going to be set on the back hand.

Guys, I hope you got a lot of useful information, that this video helped you. If you haven’t yet, go ahead and check out the community. We’ve got a lot in there. It’s super cheap. We’re going to pair you players of of the same skill levels and you’re going to get instruction that’s tailor made just for you. So, hit the button below, hit “Like” please. Hit subscribe, and then hit the link to check out the community.

Click here to get your custom video coaching: http://bit.ly/2X5sgUU