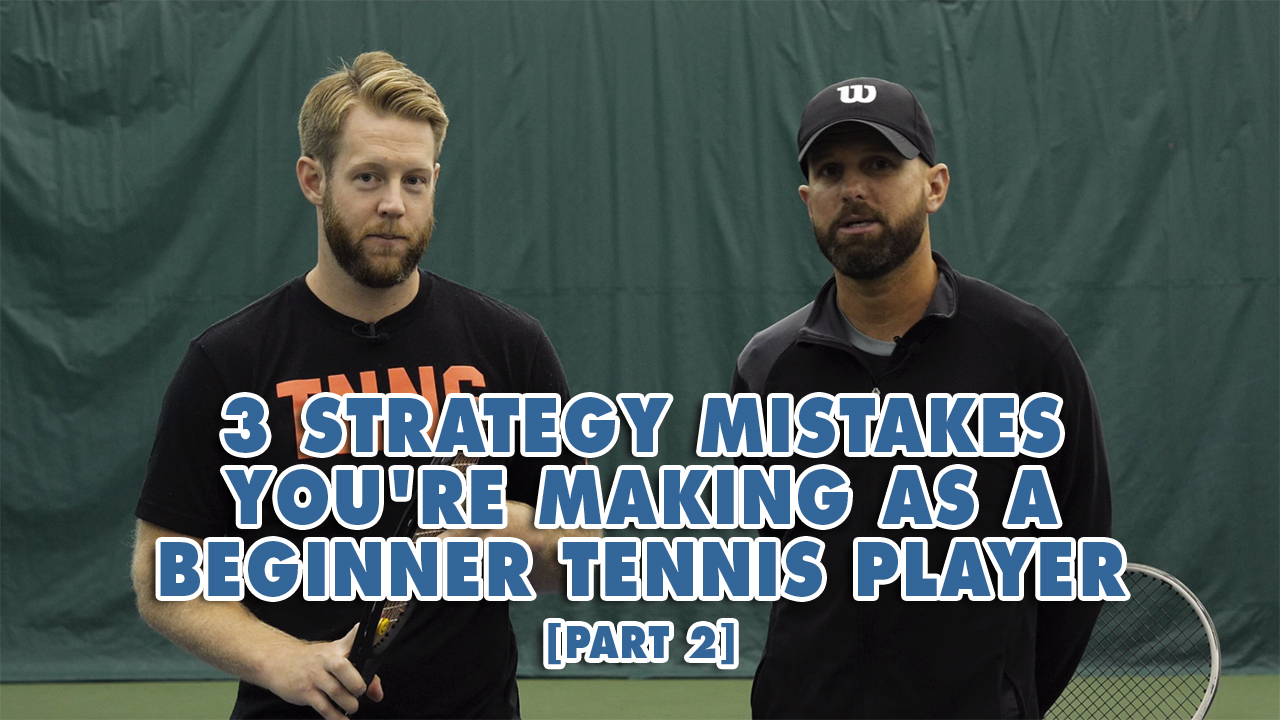 Hey guys. Scott and Nate from playyourcourt.com and today we’re going to show you the first of three tactical mistakes we see a lot of beginners make.

Today we are talking about some tactical mistakes that we see a lot of tennis beginners make. This video, to be clear, is for players in the player court rating of 60 and below. If you’re not in our community, I really, really don’t understand why. It’s five dollars a month. It’s basically free.It’s five dollars.

We give you all of the amazing things you could ever want. So, join if you haven’t already, but if you’re not in the community, or familiar with our rating system, a play yout court 60 is the equivalent of about a USTA 3.5. So, we’re really talking to beginners up to 3.5 level players. If you’re above that level, turn this video off.

We’re going to be talking about tactics. In video one, we’re going to be covering moving forward and attacking the ball or the reluctance to move forward and attack the ball. In the beginning, when we’re first learning tennis, it’s really about consistency and we’re trying not to miss, right? But it’s also what keeps us at the lower level is by not developing weapons, and not learning how to attack.

Now, certainly can we get to high level by building just a ridiculous amount of shot tolerance and consistency? Yes. But, it’s also the ceiling, all right. So, in this particular play, and you might be guilty of this, right, you get a ball that’s like a mid court ball or a short ball and you run in to hit it and then you’re quickly scurrying back to to the baseline, right, because you’re not comfortable with the net yet. All right, so, this is tactical mistake number one, not attacking, not tactically making a decision on how to hurt your opponent. And today, we’re going to talk about how to fix it. There’s a thousand different ways you can fix it but we’re going to focus on just a couple and we’ll keep them really simple for you.

If you’re just getting going with tennis, you’re certainly not comfortable moving the ball around, redirecting a ball around a target at the net. So even coming up to the net and just planting there, and just existing, you’re going to put a lot of pressure on your opponent that you don’t when you run back to the baseline. So this stuff is important. We’ll dive into more of it now.

All right, so the first thing we’re going to do is we’re going to show you kind of the culprit. Like what is the mistake? All right, we’ll check that out now. All right guys, what you’re going to see here is Scott and I really just focused on staying consistent. We’re not doing a ton with power. I’ve got my trusty continental grip, my teaching grip. But at some point through this rally, Scott is going to give me a short ball and then we’re going to see the mistake, is that I’m coming in, I poke at it, and then I desperately trying to get back to the baseline. So guys, you can see there, I’m really not making myself much of a threat when I’m getting this short ball.

I’m simply getting up there and I’m poking it back to Scott, because I’m more concerned about what’s going to happen to me being at the net, right, so I’m not even thinking about attacking. I’m simply surviving.

Just terrified. I don’t want to go up to the net. It’s scary up there, I’m going to run back to the baseline and hide.

So there’s a couple things that are happening here, is one, Scott is going to get really, really comfortable, right? Because if he’s never being attacked when he’s hitting a short ball, at that point, he’s not really worried about what’s happening with the strokes, he’s going to be free.

It’s huge to highlight that too, ’cause you think about when you’re playing with beginners, if all of a sudden, there’s no penalty for you hitting the ball short, your target area just got way bigger.

Find your opponent’s weak side

So now let’s reverse it, but let’s say now, on that ball I’ve decided to tactically be more aggressive, okay? And then the first one, this one’s going to be a lot, it’s a little obvious, you’ve probably heard it, but it’s worth repeating. So what we’re going to talk about is attacking your opponents weaker side – the backhand.

It definitely is, be careful though if it’s a lefty. It’s amazing how many players I work with, they’re like, I was like halfway through the set and I realized she or he was a lefty. Wait a second. But yeah, that’s going to happen. So on this tactic, you’re going to get up to the short ball and you’re simply going to commit, all right? And that is the problem here about moving to the net. It’s not just as easy as going down the line to the weaker side, all right? It’s about committing to it.

A lot of times it’s happening is that we’re hitting to the weaker side and we hit it at like 40% and then we basically watch it. We get past anyways and we go, ah that didn’t work I’m not going back in. You have to commit. So if you’re committing to going in, we start getting one of two things happening, either we’re hitting bigger, heavier to the target and we’re making the target bigger, right, or we’re making our target smaller and we’re hitting more towards the lines, right, we’re being more accurate.

You can hit hard and you can hit at the lines, but you can’t do them at the same time.

All right, guys, so there the strategy’s pretty clear, right? Like I’m just moving forward on that short ball, but I’m committed, right? I’m not hitting and waiting to see if it’s good enough, I’m just closing in. So I think sometimes what happens is this service line, this white line is like, stop and see what happens. And we don’t really want that. I know that’s kind of tough.

Yeah, if you commit and you continue forward and you focus on that split step at contact as opposed to the age old stop at the service line, you’re going to be able to cut off the angles better. And kind of predictable that you were going cross court there, right?

Next Tactic: Pull and Push

All right, so this tactic, we’re going to be doing a little pull and push. We talk about this in another video. In this series, what this refers to is Scott’s going to break down on a short ball and what I’m going to do now is I’m going to pull him in. So we need some backspin, right, we needed some slice. If you don’t have a slice forehand, a slice backhand, this will not apply to you. You cannot do it with topspin, ’cause the ball is going to sit up.

And this is bonus material. It might be a little bit more advanced. If you’re a beginner, saying I have no idea how to slice, we cover that in other videos.

All right, let’s go. All right guys, same scenario, Scott and I focusing on consistency. But I’m looking for that short ball and if I get it, now I’m going to go pull, oh yeah, now I’m going push. With a big lob over his head. So there, I don’t have to be at net. I’m going to pull him to net, Assuming he doesn’t like it up there either.

All right, so in the last demo, Scott hit deep, giving me the lob, but on this one, when he breaks down short, he’s going to try to drop me back, so I’m going to stalk a little bit. Oh I see it, and now I’ve got the easy pass, able to expose the open court.

Guys, sometimes the best tactic you can use is the one you’re most afraid of. If you don’t like being at the net, simply get your opponent up to the net, okay? So when they break down short, if you just aren’t comfortable approaching and going in, go ahead and drop them short, okay? And with the slice, I’m just basically blocking it. And as they come into the net, where they’re probably also uncomfortable, definitely at a 3.0 level, being little bit shaky up there, at that point, we can either look for the push, which was the lob, or we can go for the pass.

Notice, we showed you two examples, because it’s not guaranteed as the person your opponent is running in off your drop shot is going to hit deep and I needed that deep ball to go for the lob. Sometimes they’re going to go to look to pull you back in, and that’s where you’re just going to stalk. They’re getting to the ball late, rack it up, how much can they hurt you? So as they go to chip and leave it short, you’re right there. You’re looking to stalk and put that passing shot away.

For sure. And guys, just to put a pretty bow on this thing, we’re giving you two solutions here, right. What we don’t want you to do is run up to the ball, hit it back deep, and run back to the baseline. When you get that short ball, we just want to see you do one of two things, right. We want to see you either force the pressure on your opponent, hit to the weaker side and come in to the net, or like what we just talked about in the last example, there’s a couple different options, where you can drop the ball short to win the point, but what we don’t want to see is when you get that short ball, you just poking it back deep and running back to the baseline. Hopefully this helps, as you guys know, Nate and I at playyourcourt just want to see you improve your game. We don’t know a ton about your specific skill level and obviously this video, and this information is for really lower level players.

So if you’re playing at a 4.0, 4.5, different type of skill level than this, then we need to know a little bit more information, so we can send you custom video instruction. And that’s actually what the playyourcourt community is all about. So do us a favor, click the button or the link below, answer some questions for Nate and I about your specific skill level. Not only are we going to send you weekly video instruction on the very specific things that your skill level needs, we’re also going to pair you with evenly matched players in your area, so that you can get out on the court and practice all this stuff. Just click the button or the link below, we’ll get you signed up in the community, and we’ll get you improving your tennis game in no time.

Click here to get your custom video coaching: http://bit.ly/2LPai6B