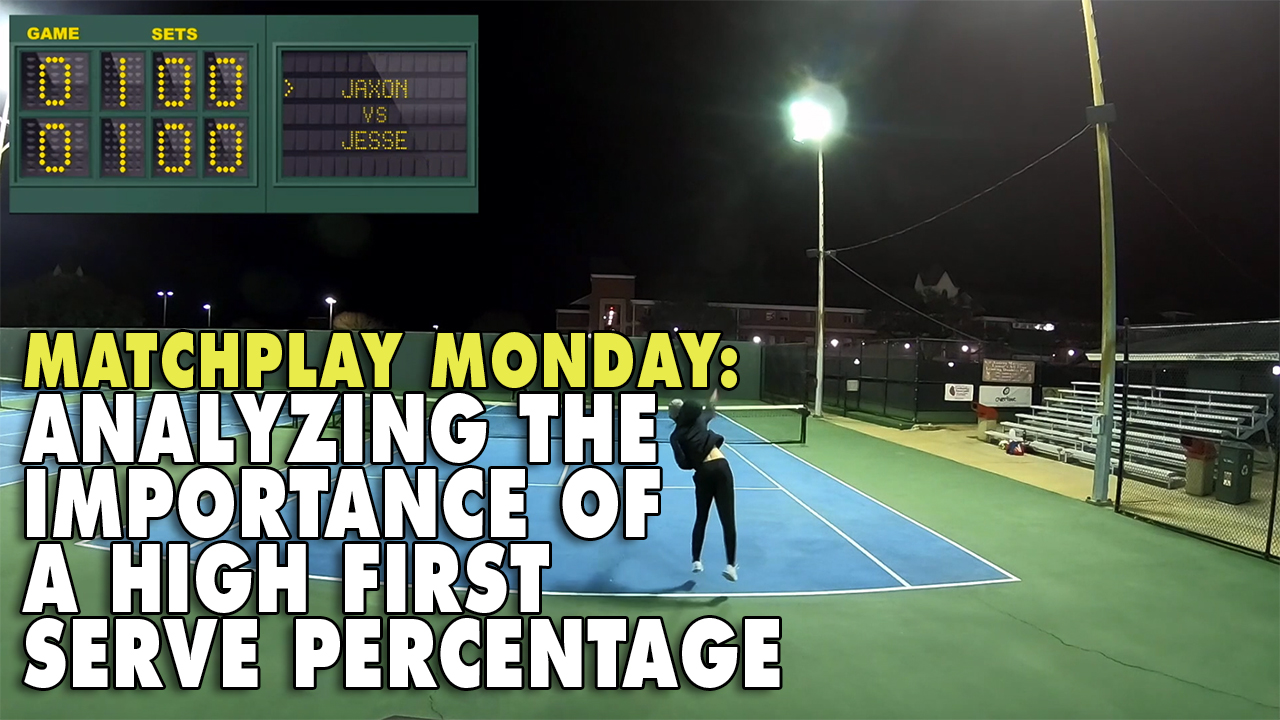 Today we study Tennis matchplay while examining the importance of a high first serve percentage. This video is for players with a PlayYourCourt rating of 50 and above.

It is Monday, Match Play Monday and today we’re featuring our PlayYourCourt court member of the day Jesse Brinson. Jesse’s a PlayYourCourt rated 70 which is the equivalent of a USTA NTRP 4.0. The things that we’re going to really watch today is the importance of the serve and the return, alright. And that’s the tell of the tape in this particular match.

We’re just going to focus on the first set here. Apparently it was very cold and they were struggling with the rhythm. What Jesse does is focuses on serves at about the 70 percent range, plenty of spin, and locating targets. And because of this, Jesse wins eight points through forced errors off the serve, and then one ace.

So basically nine free points off his service games. And in contrast, Jaxon took a little bit of time getting going, and unfortunately had seven double faults while only forcing one error off his serve with zero aces. So when you start looking at the math there, we’re talking about 16 points in Jesse’s favor that just happened from the serve.

Either forcing an error, receiving an unforced error. That is absolutely huge guys. When we’re playing we’ve really got to focus, especially in the beginning, of not allowing the serve to be a liability, not having to hit a ton of second serves. We want to be hitting first serves at about the 60 to 70 percent range focusing on targeting.

As far as returns, we really want to make sure we’re getting the ball back to neutral. Getting to that 50/50 ball. So sometimes that’s just as simple as blocking it back deep middle, or changing position and chipping it back deep as well. Remember, by going middle you take away the opponent’s angles so as long as it’s deep, you’re going to get yourself into a situation that you can play out from neutral, potentially find some offense. Part of this strategy is the battering ram when we go deep through the middle of the court. So through the building phase, once the point has got started we’re looking at Jesse just really controlling play with the forehand producing four winners while committing five unforced errors.

But the real issue there, that ratio’s not bad primarily because of the number of unforced errors from Jaxon’s end which we see six unforced errors compared with only one winner. The one stat that we really want to focus on is forced errors and this is big. This is where Jaxon could have got himself back into this set. Forced errors are anytime you’re putting pressure on your opponent, you’re taking time away so whether it be with spin, or power, or taking the ball on the rise, or moving forwards. And Jaxon was able to produce six forced errors and that was primarily done with a tactic change at the end of the set where he came to net eight times, winning five of the eight points, forcing six errors.

That means Jesse simply just missed with Jaxon coming forward, by getting some pressure on him. This is a trend we saw moving into the second set. Jesse won the second set 6-3. He didn’t quite finish the match but he was up 5-3, 15-0 before the lights went out. But Jaxon made a match out of this with a good tactic change by moving forward. And I think that’s something that we don’t pay enough attention to, is getting forward and keeping pressure on the opponent. Especially if you’re struggling from the ground of using off pace, using different spins and getting yourself forward in order to force some pressure on your opponent, just giving them a different look. On this particular night, just a little too much with the shot tolerance on Jesse’s ability to create easy pace off that forehand, and just some really good serving percentages.

But the big take away here guys is make sure especially in the beginning of a match that you are focusing on a high first serve percentage. Take a little off the focus on the targets and make sure you’re getting those returns deep back into play. Guys, if you enjoyed today’s video content hit the like button, if you never want to miss a Play Record video hit subscribe, and be sure to check out the vault. The vault is now open thousands of hours of content typically reserved for premium membership now available for the entry level price of 5.99. If you want your match featured on Match Play Monday send them to us, we’ll check them out. Take care.