Rafael Nadal: The new #1 in tennis.
Skip to content 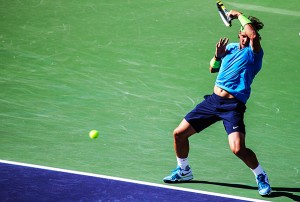 The following is a two part article.  With part two presented first, and part one to follow.

And this intrepid reporter is guilty (as charged) because I had written part one prior to the results in Beijing at the China Open.

At that tournament, Rafael Nadal recaptured the Number One ranking, but along the way was thoroughly dismantled by Novak Djokovic in the finals.

As you will see later (in the original part one – I assessed his game as nearly unbeatable – Novak (read on) had other ideas.

Part Two – In the finals at Beijing Novak outplayed our newly crowned Number One 63 64.

In a victory that Novak described as ,”Very important for my confidence. It’s very important mentally and emotionally for me.” For Novak had lost three times previously this year at Roland Garros, Montreal and the US Open. In this particular match Novak was overwhelming, winning :

Rafa may be exposed when returning from so far behind the baseline, and it may be now that Camp Djokovic will place much more stock in serving to the corners.

So it seems as though there will be more tennis played between these two in the remainder of this season and well into 2014.

Part One (the guilty as charged part)

Rafa captured the 2013 US Open title, dismantling Novak Djokovic.  But in addition to the convincing victory, as well as to the addition of his 11th Grand Slam title – somehow it appeared that Rafa had broken Novak’s will.

In a infamous fight between Roberto Duran and Sugar Ray Leonard in 1980 – there came a moment when Duran, for whatever reason, threw in the towel, turned his back on Sugar Ray, and told the referee “No mas.”

Stop.  I am not in any way saying Novak quit.  But, and this is important – I believe that at this point in men’s tennis, Rafa is simply unbeatable – he is a genuine game changer – and the guys all know it.

Patrick McEnroe has said, “All the players have the new racquets and strings, but Rafa is the only one who can hit it harder and with more spin that all the others.”

Many years ago the same was said of Pete Sampras.  At that point, most of the guys could get the ball above 120mph, and they could all get the rpm’s above 2000, but only Pete could do both on the same serve.  Said another way, Pete had more racquet head speed than any other on the serve, and now the same can be said of Rafa on his marvelous, consistent, but deadly forehand.

As regards a simple accounting of tennis skills Rafa –