We send top-rated coaches to your local courts for convenient tennis lessons in Columbus, OH

"Chase is an excellent pro --extremely knowledgeable, personable and focused. He is genuinely invested in seeing his clients improve."

"My daughter made more progress in one lesson than in a month of previous instruction."

"Julie was super knowledgeable and fun to work with!I will definitely be back for another lesson."

"Friendly, and flexible to meet our requests. Looking forward to our next lesson." 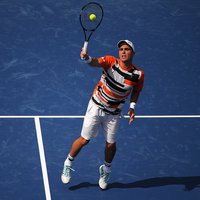 Here's what you can expect from a PlayYourCourt tennis coach in Columbus...

What makes our tennis lessons in Columbus better?

The PlayYourCourt community is the easiest way to meet new players in the Columbus area.

The midwest may be known for cold winters, but don’t let that fool you, Columbus, Ohio is a phenomenal year-round tennis town! There are at least eleven wonderful tennis clubs scattered across Ohio’s largest city, and thanks to the Greater Columbus Tennis Association, there are tennis offerings for players of all skill levels and ages. On the Greater Columbus Tennis Association’s website, you will find the hub for all things tennis in the community. Their programs include USTA Area Qualifiers, 10 & Under Initiative, Junior Team Tennis, USTA Adult Leagues, and Men’s & Women’s Summer Leagues, and that is just the start! If you are looking for league play, tournaments, or just want to expand your tennis network, this is the place for you.

If you want a more exclusive place to take the court, Columbus gives you lots of options, but none better than the Racquet Club of Columbus. Consistently ranked the #1 racket club in Ohio, this full service private club is centered around its 10 brand new courts. You are likely to find the best young junior players in the state training there, thanks to the staff of USPTA teaching professionals, and bevy of high level clinics. But the facility isn’t just for junior talent. There are plenty of adult clinics, tournaments, and social events, too. They are constantly upgrading the facility, and are proud to offer brand new LED lighting that is the highest quality in the industry. Not only will you see the ball better, but it is also great for your eyes. Long story short, no need to worry about the chilly temps and snow outside when you descend upon the Racquet Club of Columbus!

If you would rather watch tennis than play, Columbus would be happy to oblige. Home of THE Ohio State University, both their men’s and women’s tennis programs are consistently among the top ranked collegiate programs in the entire country. And if watching the best collegiate players in the country isn’t quite good enough for you, the Ohio State Indoor Varsity Tennis Center is also home to the ATP Tour’s Columbus Challenger. With one of the largest purses on the Challenge Tour, it consistently draws the top young players from all over the world to fight for valuable ATP points. One thing is for sure, you will be blown away by the level of play!

Skyler E. is PlayYourCourt’s featured pro providing tennis lessons in Columbus. Skylar’s career got started when he was the Ohio High School Champion before playing D-I tennis at the University of Toledo. He has been teaching for the past 10+ years and specializes in working with higher level players, although he really enjoys working with beginners and developing their love for the game as well.