We send top-rated coaches to your local courts for convenient tennis lessons in Palm Coast, FL

"Wonderful instructor - I am shocked at how far I've come in just 20 lessons."

"Rudy is great. He focuses quite a bit on technique and provides spot-on feedback."

"Ali is a great tennis coach ! he's patient and passionate about teaching i highly recommend him"

"The lesson was great! Drew was very knowledgeable and professional. I came out of the hour lesson a much better player than I started!" 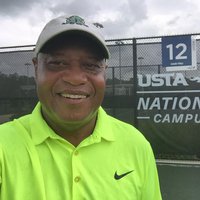 Here's what you can expect from a PlayYourCourt tennis coach in Palm Coast...

What makes our tennis lessons in Palm Coast better?

The PlayYourCourt community is the easiest way to meet new players in the Palm Coast area.

Florida is about more than just Spring Break. Those in the city of Palm Coast can head over to the Palm Coast Tennis Center for some good ol’ fashioned racket fun. The center is a USTA National Award Winner for Small Public Facility, with 10 HydroGrid clay lighted tennis courts, round robins, lessons for adults and juniors, and racket stringing. PCTC is a certified Quickstart Tennis Site as well as a certified Cardio Tennis Site.

For those who don't know, HydroGrid is a new court technology that offers a cost-effective alternative to the upkeep of clay tennis courts. The HydroGrid goes underneath the court and keeps it cooler, automatically dispenses water when the court needs it, and tennis players can keep playing on the courts as they are watered since the system waters from below.

PCTC also hosts the USTA Futures Men’s Tournament, a week long tournament that showcases up and coming tennis talent. Up to 128 touring professionals compete for a $15,000 purse, as well as ranking points that players need to ascend to larger tournaments.

A small, private court option in Palm Coast is the Belle Terre Swim and Racket Club. There are 4 courts and the club offers tennis lessons for adults and juniors, however they are at a steep private tennis lessons rate. Another, larger option is the European Village Tennis Club, which has 14 lighted tennis courts. In addition to PCTC, Palm Coast has two public parks with tennis courts: Holland Park and Belle Terre Park, which both have 3 courts.