We send top-rated coaches to your local courts for convenient tennis lessons in Burlington, VT

"Informative and fun. Omar got right to the issue I need help with. Plus he is a very nice person. I look forward to seeing him."

"I'm a beginner and I took just one lesson with Spencer so far. All I can say after just one session is that he is a great coach. I think I can learn a lot from him."

"Always finding ways for me to improve and build confidence."

"My daughter is a teen and not always easy as she can be pretty lazy. She had her best lesson yesterday in years. Savana knows how to talk to her to get her to try new things. I'm impressed." 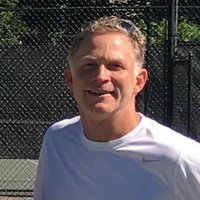 Here's what you can expect from a PlayYourCourt tennis coach in Burlington...

What makes our tennis lessons in Burlington better?

The PlayYourCourt community is the easiest way to meet new players in the Burlington area.

EDGE Tennis offers indoor and outdoor facilities in both Essex and South Burlington, VT. Not just a country club, EDGE Tennis puts its focus on maximizing your skills, which means the tennis lessons there are not to be missed if you can swing the hefty price tag. Of course, if you want discounted lessons at the tennis court closest to you, PlayYourCourt is a better fit.

At the Burlington Tennis Club, you’ll fall in love with their quintessential family summer club experience. As a member-owned, not-for-profit club, you’ll feel good about it, too! Offering 8 HarTru clay courts and spectacular views nestled in the beautiful Burlington woods.

Burlington, VT also has many public tennis courts – so if you’re just looking for a pickup game or private tennis lessons with a pro of your choice through PlayYourCourt, you can easily find a place to do it. Sometimes, the tennis scene can be exclusive, but in Burlington, VT, the keyword is inclusive. It’s a great place to play and learn new skills.

In fact, the tennis scene is so inclusive it extends to other countries! In early 2017 the program director for the Burlington, VT based kids tennis program "Kids On The Ball" raised more than $600,000 to improve Cuba's National Tennis Center. The director of Kids On The Ball visited Cuba several months before and immediately saw the need for tennis lessons. He told WCAX.com, "What we had to do was bring all the material from the United States in cargo ships, and then we brought all the workers from the United States."

Part two of the effort to expand tennis lessons into Cuba will be organizing tournaments between American members of the tennis association and Cuban members. Get your junior trained up and ready to face off with some tennis lessons in Burlington, VT through PlayYourCourt!

Robert K. is our featured coach providing tennis lessons in Burlington! Robert brings with him 43 years of experience and a USPTA certification. Before starting his coaching career, Robert was a New England junior champ as well as a high ranking player in men's doubles and singles. Robert is the Director of Tennis at a private Burlington country club and a prep-School coach. He will make your tennis lessons fun and engaging while ensuring you excel! If you want quality tennis lessons in Burlington, VT Robert is the perfect coach for you!